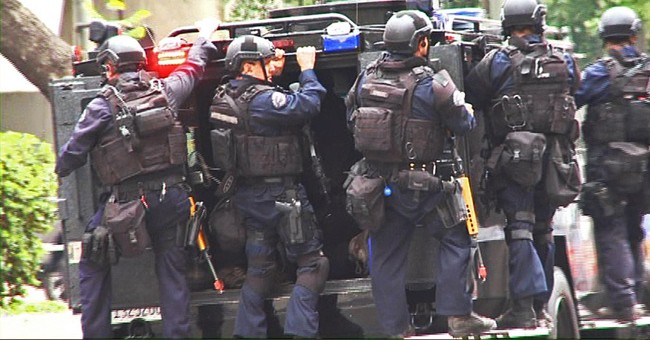 Let us stipulate that none of us know what happened between Ferguson, Missouri police officer Darren Wilson and Michael Brown. We can also stipulate that the members of the Ferguson Police Department might need some additional training.

The Ferguson PD has 53 officers to Serve and Protect about 20,000 residence. That seemed high to me, but a quick glance at other places shows that might be about right.

Washington, DC has 4,000 uniformed cops (not counting about 2.3 million other federal agency police officers) for 600,000. If that ratio were transferred to Ferguson it would have a uniformed force of about 133 cops.

On the other end of the scale, greater York, Pennsylvania (pop. 108,000) has 44 uniformed officers. Transmogrifying that to Ferguson would leave the city with only about 16 cops on the street.

In addition to the continuing, and increasingly troubling, issue of racial issues in the United States, the Ferguson situation has given rise to what became known over the weekend as the "militarization" of America's police departments.

Whether or not Ferguson, or any other city police department needs enough military equipment to allow Captain American III to be filmed there raises serious questions.

First among them is: What is the purpose of a police department?

My off-the-cuff answer is: We want our cops to keep us safe in our homes, schools, and places of business. We want them to make sure cars are driven in a safe manner so they never run over out kids at stop signs, or bump into one another too often.. And, we want them to … that's pretty much it.

In fact, the official document describing the nature and duties of the police force in Baton Rouge, La begins with

Most police departments do not need armored, anti-IED personnel carriers for the routine checking of parking meters, unless the parking meters are in Fallujah.

A great deal of equipment that has been made available to local PDs is military surplus. We have produce many, many armored, anti-IED personnel carriers for use in Iraq and Afghanistan that are no longer needed there.

They are probably not needed in Ferguson either but it's tough to turn down equipment when it is offered for free.

It would be useful to know (a) what the inventory of military equipment is in the Ferguson, PD and (b) what type of training was offered or completed in the utilization of that equipment.

As a former member of the City Council of Marietta, Ohio 45750 we were always wary of free stuff offered by the state government in Columbus. It wasn't so much what we were getting. Our concern was the cost of maintenance, storage, the aforementioned training and - dare we mention - replacement, if and when the stuff wore out.

When the Congress comes back from its five week tour of Martha's Vineyard and places West and South it might be useful to find out not just what military equipment has been parked with local PDs like Ferguson, but also what level of militarization has been attached to federal agencies.

How many federal employees have, as their principal responsibility, armed protection of people or property? What types of military equipment - by federal agency - have been assigned.

How many, in addition, contractors have that same responsibility and what type of military-type gear are we paying for among that group?

Here's a good starting point: What, if anything, is in the military inventory of the Department of Education? How many people in that Department are acting in police, personal security, intelligence and/or counter-terrorism roles - both full-time federal employees and contractors?

I counted 28 different federal police agencies in the District of Columbia ranging from the FBI and Capitol Police to the Smithsonian Institution Office of Protection Services.

I am not kidding about the Smithsonian cops. There are 850 of them. Eight Hundred and Fifty armed men and women protecting John Glenn's Freedom 7 space capsule at the Air & Space Museum and little Bao Bao, the panda cub at the National Zoo.

Maybe we should start there and see how much military equipment the Smithsonian cops have.

If you wonder how we got to a national debt of $17.7 trillion, this may be part of the answer.

On the Secret Decoder Ring page today: A website showing police-per-capita around the nation, the Baton Rouge PD duties page, the Wikipedia entry for all the police units in DC, and the page dedicated to the Smithsonian cops.

Also, a license plate Mullfoto you will probably understand immediately.