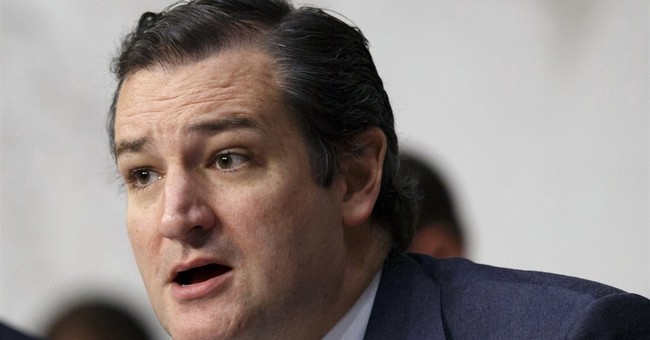 I bet, that if you wanted to start a real shouting match with the Obamanistas, it wouldn't do to compare President Obama to George W. Bush, or even Richard Nixon.

The "Fightin' Words" would be: Ted Cruz.

One of the few bright spots for the President in this poll is the approve/disapprove on the Congress: 14/79. The only polling number worse than Congress' was the question about whether a respondent had a positive or negative feeling toward ?

?Vladimir Putin who came in with a startling 4 positive/68 negative. The NSA is busily searching through cell phone calls to find those 4 percent who think Putin is swell.

But, I don't want to talk about dreadful polling numbers. I want to talk about the fact that Barack Obama appears to be hell-bent on setting up a fight to the finish with, at least, the Republican-led U.S. House, if not with the Congress as a whole.

This is totally in line with Sen. Ted Cruz' (R-Texas) view of legislating which is: It's all about me and what I think is the right course of action.

Just before the Congress went home for the August recess, the House passed a bill to spend some money helping with the current crisis on the border. That is the young people mostly from Honduras, El Salvador, and Guatemala coming to the U.S. because they believe if they can get across the border they can stay.

An earlier version was thwarted by the aforementioned Ted Cruz who came over to the House side of the Capitol - maybe the first in American history that a Senator went to visit House Members on their own turf - and convinced the Cruzettes to vote against a bill that had been proposed to help the situation.

The President did his Ted Cruz act and set the stage for the showdown by saying a few days ago:

"House Republicans suggested that since they don't expect to pass a bill I can sing, that I should go ahead and act on my own to solve the problem."

House Republicans, of course, suggested nothing of the sort, but the Washington Post's David Nakamura wrote:

The anticipation that Obama is preparing to sign off on a major expansion of the 2012 relief program - which has delayed deportations of more than 550,000 younger immigrants - has prompted Republicans to begin framing such a move as more evidence of an imperial White House intent on circumventing Congress.

Just before it quit for the summer, the U.S. Supreme Court ruled that certain "recess appointments" that the Administration made were Unconstitutional. The reason was the Senate had taken their Christmas/New Year break but was holding "pro forma" sessions every three days - that is someone called the Senate to order and immediately adjourned.

The President decided that counted as a recess.

SCOTUS ruled that it is the Senate and not the White House that decides whether or not the Senate is in recess. The somewhat trenchant quote from Liberal Justice Steven Breyer was,

"The Senate is in session when it says it is ?"

The President doesn't get to read the minds of either chamber of Congress. For him to say "House Republicans suggested" they want him to act unilaterally, is the same self-serving, unyielding, non-productive and inflexible attitude that Cruz has brought with him to Washington.

Ted Cruz is only one percent of the U.S. Senate. We don't have 100 Presidents.

We only have Barack Obama and this flailing attempt to make himself look decisive will probably not have the desired effect of either saving the U.S. Senate for Democrats, nor doing anything to help his quickly-dissolving legacy.

"Some Senate Democrats running for reelection in traditionally conservative states, such as Arkansas and Louisiana, have expressed misgivings about Obama going too far on his immigration order, fearing it will not play well among voters in their states."

One Ted Cruz is way more than enough.

We have a right to expect better from President Obama than to descend to Cruz' level of leadership.