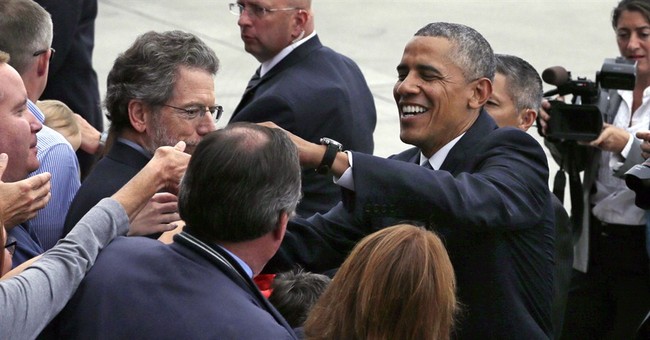 During the Senate hearings into what had already become known as "Watergate," the leading Republican on the panel, Sen. Howard Baker of Tennessee asked of witnesses "What did the President know and when did he know it?"

"The President," in that construct, was Richard Nixon but in the ensuing 41 years, Senator Baker's question has been asked of many Presidents regarding many scandals and crises.

The current crisis is the tidal wave of children crossing the Southwestern border from Mexico, many having made the harrowing trip from El Salvador, Honduras, and Guatemala as well as from Mexico.

The Washington Post published a damning article on Monday maintaining that what the President knew was that "top officials at the White House and the State Department had been warned repeatedly of the potential for a further explosion in the number of migrant children."

And those warnings had begun two years ago.

According to the Post, these warnings weren't just some guy walking along Pennsylvania Avenue and shoving a paper airplane with the warning written in #2 pencil through the White House Fence.

-- Two years ago "Customs and Border Protection and Immigration and Customs Enforcement, were "ringing alarm bells" within the administration."

-- "In April 2012, the first ladies of Mexico, Honduras and Guatemala voiced their concerns at a conference in Washington on unaccompanied minors."

-- Shortly after that visit, "Texas Governor Rick Perry (R) wrote a blistering letter to Obama, citing a 90 percent increase over the previous year in the number unaccompanied minors arriving from Central America."

The problem, as we now know, has continued to escalate to the point that current estimates by the Border Patrol are for as many as 90,000 unaccompanied children arriving by the end of September.

The Administration's response to this story was to send the new White House Press Secretary, improbably named Josh Earnest, out to criticize the Washington Post for, as reported by Dylan Byers in Politico.com:

"running a story in which anonymous sources -- former government officials, outside experts and immigrant advocates -- said that the White House had been warned of the current immigration crisis."

Note, Earnest didn't dispute that the President's senior team had been made aware of the growing crisis, just that there were anonymous sources included in the story.

Ironically, as Byers points out in his piece, "the admonition came just before a White House sanctioned background briefing with -- you guessed it -- anonymous 'senior administration officials.'"

I understand that not every warning from every First Lady of every Central American country goes directly into the Oval Office. But, it would appear that there have been a string of flashing red lights that someone in the White House should have taken seriously.

Remember, 2012 was a what? Election year. And who was running for election? Barack Obama. No Drama Obama. His team didn't want to give the Romney camp any ammunition to use to distract the nation from the evils that had been perpetrated upon it by Bain Capital.

Monday marks the 100-days-to-go mark before the mid-term elections on November 4.

The nation does not appear to have any appetite for foreign military adventures. Benghazi is too complicated for most of us to be able to follow closely. Syria, Gaza, Iraq, Ukraine and Russian natural gas are not our problems.

The danger for the President and for Democrats running for election in November is that this story is easy to understand and may become a metaphor for what many people already believe about this President: That he is detached, disinterested, and bored with the whole President thing.

The President's approval ratings are stuck in the low 40s and don't appear to be moving any time soon.

The danger for the President and for Democrats running for election in November is that this story is easy to understand and may become a metaphor for what people believe about this President: That he is detached, disinterested, and bored with the whole President thing.

Whether there were anonymous sources in the Post's story or not, the question of "What did the President know and when did he know it" or "when should he have known it" is now on the record.

Two years have come and gone and the President has done nothing to avoid, or at least mitigate, this exploding humanitarian crisis.