The World Cup Runneth Over 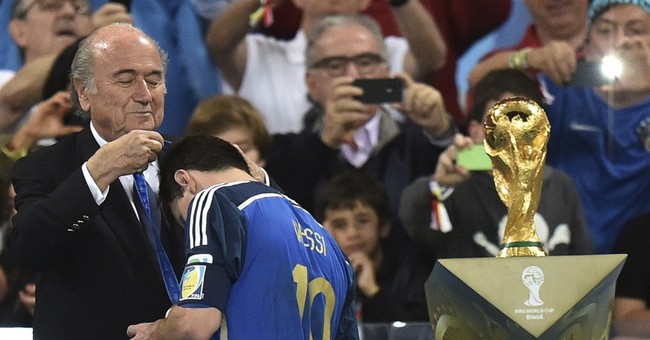 I am not a World Cup Denier. I understand that futbol is the most popular sport in the world - everywhere except Estados Unidos. I expect it is so popular because it can be played by anywhere by any number of kids as long as there is a ball and an empty lot.

The best thing for me is that we don't have to go through a month with our cube-mates pretending they understand the game (and telling me with great authority what Cote D'Ivoire needs to do to win) for another four years.

When I was a kid growing up on Long Island we had two versions of stickball and one version of stoopball, that we played just about every day in the summer.

The games had about the same rules, the difference was how you put the ball in play. In stoopball the "batter" threw the ball against your front steps (or stoop). An accomplished player could hit the step right on the point of the brick, launching the ball almost into a collision with Sputnik.

In all the games, singles, doubles, triples, and home runs were determined by the flight of the ball after being hit (in stickball) or whacked against the stoop.

A ball that went past the "pitcher" or the player closest to the "batter" not over his head was a single. A ball over his head but hitting the ground in front of one of the (sometimes many) outfielders was a double. A ball over the head of the outfielders was a triple, and a ball that - on West Maple Drive - got to the opposite side of the street on the fly was a home run.

In street stickball a pitcher and a catcher were involved as well as the batter and the fielders. As I remember, the pitcher had to bounce the ball in or else every pitch took about 20 minutes while the catcher chased the ball all the way down to Maple Circle.

After a while we altered the game so that the batter would bounce the ball in front of him and attempt to hit it. That saved considerable time in retrieving the ball and also replacing the catcher who would quit after about his second trip to Maple Circle.

No running was involved. We kept track of who was on what base in our heads and runners would move along based upon what happened to the next batter (i.e. a runner on first would move to third on a double).

Stickball required two other items. First a sawn-down broom handle. This was in the 1950s so worn out brooms were pretty easy to come by. The second thing was someone's brother or sister too young to play in the game who was the lookout. He (or she) would holler "CAR" at the top of their lungs should an auto come down West Maple Drive during the course of the game.

On the call of "CAR" all players would retreat to the nearest "curve" - which is how we pronounced "curb" until about 11th grade - while the offending auto drove by.

The only other thing that would be a legitimate reason to pause the action was if the Good Humor truck came by. Then everyone went running at full-tilt into their houses begging their moms for 10 cents to buy an ice cream.

A stickball variant in our neighborhood was played in the schoolyard at Hillside Grade School. This involved drawing, using chalk, a reasonable facsimile of a batter's box on the brick wall outside the gym.

The same scoring obtained with regard to singles, doubles, and triples. A homerun was scored if the ball hit the fence on the opposite side of the parking lot on not more than one bounce. If the ball went over the fence, the game was over because (a) we were afraid of the man that lived there and (b) we would have to walk all the way up to Larry's Candy Store on Hillside Avenue to buy a new one.

The ball, by the way, was a "Spalding High Bounce" rubber ball. It was bubble gum pink, but we didn't know that playing stickball with a pink ball might raise questions back in those days.

We also didn't call it a Spalding High Bounce. It was known - even in as distant a place as at my cousin's apartment house in Far Rockaway, Queens - as a "Spall-DEEN;" a fact that my brother and I found astonishing. Like finding out the word for "cellphone" is the same in Kansas and Kenya.

Like futbol, these were very popular sports on Long Island because you could play them anywhere. All you needed were some kids, a ball, and some space.

On the Secret Decoder Ring page today: The "official" rules of stickball and a photo of a Spall-DEEN in all its pink glory.

Also a Mullfoto of storm clouds gathering over the Lincoln Memorial the other evening.