Iraq - the State of Play 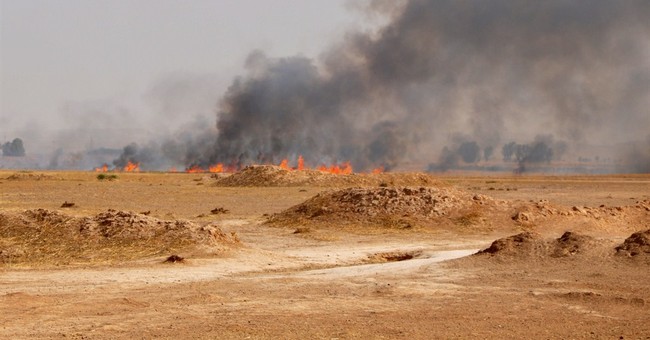 Iraq, as you might have been reading, is dangerously close to collapse with the army of Islamic State of Iraq and Syria (ISIS) having attacked and taken control of large swaths of the country.

Put aside your natural inclination to blame President George W. Bush for invading in the first place, and/or President Barack Obama for not being able to reach a Status of Forces Agreement (SOFA) with the Iraqi government that would have allowed us to leave, perhaps, 15,000 troops there.

This is where we are now.

I spoke at length, yesterday, with an Iraqi expert who returned from Baghdad Saturday afternoon.

His basic thesis is this:

The military phase is over.

ISIS, even though it has declared a Caliphate, is stretched very thin and cannot prosecute further serious military expansion while it attempts to form the civil infrastructure to manage the territory it now controls.

So, if the Iraqi Prime Minister, Nouri al-Maliki, can form a government (the Parliament has simply refused to show up for work) he can buy some time to build his security forces and perhaps build an anti-ISIS coalition.

The Iraqi government says it is fighting back and claims it has retaken the city of Tikrit using elements of what the Washington Post called "a rag-tag air force."

According to the Post, the Iraqis are negotiating with Iran for the return of "more than 100 Iraqi jets, including Soviet-made Sukhoi bombers and MiGs, which were flown to Iran by fleeing Iraqi pilots during the 1991 Gulf War. If delivered, they would join secondhand fighters from Belarus and Russia to create a ragtag air force that Prime Minister Nouri al-Maliki is hoping can help reverse insurgent gains.

In addition to getting those planes back from Iran, according to the Arab News, Iraq has agreed to purchase about $500 million worth of Russian ground attack aircraft after "Iraqi officials voiced frustration that multi-billion dollar deals for US-made F-16s and Apache helicopters have not been expedited."

Thus, as he did in Syria, President Barack Obama appears to be prepared to share influence over events in Iraq with the Russians.

The Arab News also pointed out, that to add to the confusion, "Kurdish forces moved into areas vacated by Iraqi federal soldiers, putting them in control of disputed areas that they have long wanted to incorporate into their three-province autonomous region, a move Baghdad strongly opposes."

The Kurds are predominantly Sunni, but for most their ethnicity is more important than their branch of Islam.

More complexity: Ramadan began on Saturday (U.S. time) meaning that the faithful among the world's 1.2 billion Muslims will be observing the major rules of the holy month through approximately July 28.

The major rules include no eating, drinking or smoking during the daylight hours. In the northern hemisphere the lunar calendar's march backward toward the summer solstice means the days are very, very long.

That tends to make many Muslims extremely cranky long about five in the afternoon.

ISIS (also known as ISIL) is a Sunni-based offshoot of al-Qaida, but according to the Voice of America, the child is attempting to push the parent off the stage:

"In the winter, al-Qaida's top leadership disowned ISIL and its mercurial leader Abu Bakr al-Baghdadi - a slap down for refusing to obey orders and for his ambition to carve a borderless caliphate across the Levant taking in Syria, Iraq, Jordan and even Lebanon."

Thus, we might be looking at the two major terrorist organizations going to war with one another. That might be a good thing were it not for the possibility that one of the battles might be which can create more havoc in the West.

What's the phone number for Tesla?