The Theory of the World is Wrong 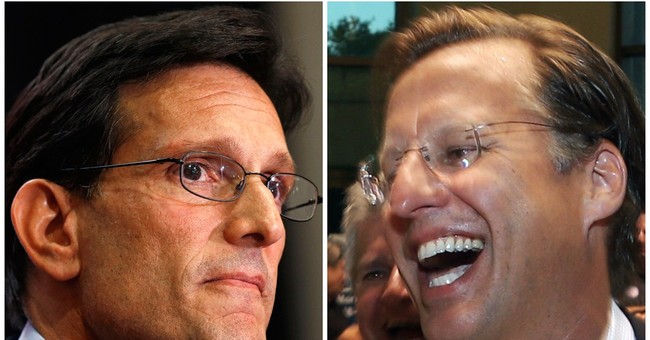 We've been through this before, but it bears repeating today: Politics = winning. Religion = salvation.

Those are not the same thing.

To the surprise of almost everyone, this year's Theory of the World, cited 173 times each and every day on cable networks, radio talk shows, podcasts, and in the lunch line at the Longworth Cafeteria, was dealt a real blow last night.

The Theory of the World is: This is an virulently anti-incumbent year. People who are long-time denizens of Washington, DC are in real trouble. They will be beaten. They will lose. Their time is over.

After the primary that showed soon-to-be-former Republican Majority Leader Eric Cantor (R-VA) the door in Richmond, the Theory of the World took hold: Dave Brat won because Americans hate Washington and everyone who works there.

The thing about Brat's win over Cantor was, until he won, Tea Party groups had studiously ignored him. Only after his stunning victory did they light their torches, hoist their signs, and march victoriously around Capitol Square in Richmond claiming credit.

Rangel is running for his 23rd term in Congress and, as of this writing, has a mathematically insurmountable lead over his opponent, Adriano Espaillat, even with some absentee votes still to be counted.

Rangel's Bronx, New York District has been as safe as any in the nation for an African-American. But, the district is changing and there are a significant number of Hispanics in the mix leading the geniuses in Washington to believe that Espaillat, would win the primary and be the next Congressman.

Rep. Rangel promised this would be his last run and, it seems, was awarded a victory lap by his constituents and will return to the House of Representatives next January.

Sen. Cochran's story is different. He has been in Washington (House and Senate) for 41 years and he lost the primary in Mississippi three weeks ago by a handful of votes to Tea Party darling Chris McDaniel.

But, McDaniel ended up just shy of the 50-percent-plus-one threshold to avoid a runoff and so the two squared off again yesterday.

The Theorists of the World gave Sen. Cochran between no chance and zero chance (although, because of the World Cup, some gave him nil chance) to hold onto his seat.

In Mississippi, unlike Virginia, the Tea Partiers were all over the race against Cochran. Chris McDaniel was going to win and win big.

Cochran's re-vamped campaign actively courted Democrats in Mississippi - specifically African American Democrats - to vote in the open primary for the Senator. The strategy worked and, according to CNN "about 61,000 more people voted Tuesday than in the primary two weeks ago."

The Tea Partiers howled like stubbed toes that Cochran's campaign had, in fact, cheated by getting African Americans to not just turn out in a GOP primary, but turned out to vote for a White Incumbent Senator.

McDaniel's supporters - and McDaniel himself - claimed Cochran was more interested in winning than he is in fighting President Obama and changing the direction of America.

Elections are about winning so you can go to the city council, or state legislature, or the U.S. Senate and cast votes. If you lose the election - no matter how pure your positions - you get to use your ample free time to cast for trout.

So far, this primary season, only two Federal incumbents have been beaten: The aforementioned Eric Cantor, and 91-year-old Texas Congressman Ralph Hall. That is a fairly typical result.

In 2012, 391 members of the House ran for renomination: 13 lost (3 percent), but eight of those lost to other members of Congress in redistricting-induced member vs. member battles."

The Theory of the World is wrong.