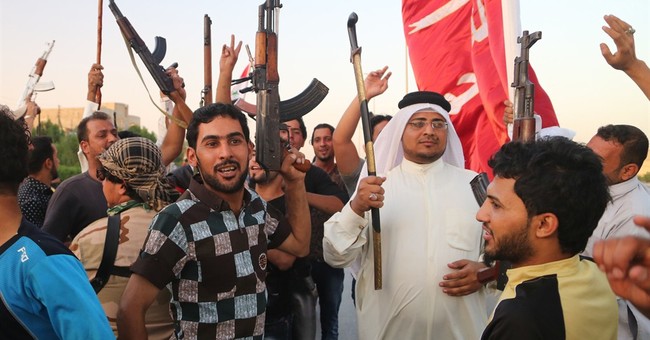 Another fast-moving story overtook Our Nation's Capital this weekend as the Sunni insurgency that invaded and took control of Iraq's second-largest city, Mosul, last week and was marching on the capital of Baghdad.

The issue of Sunni/Shia (SHEE-uh) relations goes back to the death of the Prophet Mohammed in 632 AD. The extreme shorthand of the split between the two major branches of Islam stems from who was the true successor to Mohammed.

I have linked to a pretty good two-minute video by the Washington Post's Karen DeYoung that is from January, but tells the story very well. It is on the Secret Decoder Ring page.

Iraq, painted with a broad brush, has three major religions or sects that more-or-less control large swaths of the country: The Sunnis, the Shias and the Kurds.

Kurds? They are of Iranian Sunni descent and live in the region of Iraq that borders Turkey and Iran. As we were told in every conversation with them during the Coalition Provisional Authority days, the Kurds are the largest ethnic group in the region without their own country.

Their part of Iraq, known as Kurdistan, has been among the most stable, if only because the political leadership decided it was more profitable to get along than to fight with each other, especially in light of the fact that Kurdistan has a significant percentage of Iraq's oil reserves.

From the Tower Magazine:

Ottoman provinces became Arab kingdoms, while Christian and Jewish enclaves were carved out in Lebanon and Palestine. Syria, Libya, and Palestine were given names resurrected from Roman antiquity. Libya reappeared in 1934, when the Italians combined Cyrenaica, Tripolitania, and Fezzan. The French mandate marked the first time "Syria" had been used as the name of a state, whereas "Palestine" was merely a Syrian appendage. Iraq had been a medieval province of the caliphate, whereas "Lebanon" referred to a mountain and "Jordan" to a river.

Trust me. Reading more, doesn't make it any clearer.

It has been considered very intellectual to blame the Brits for the sectarian violence based upon those artificial borders, but my answer has always been: Name me one country (not counting countries that are islands like Japan, Australia and England) whose borders were not artificially drawn.

For most of the 20th Century the Germans kept map makers in business drawing and redrawing borders and renaming countries in Europe.

As for whether the current problems in Iraq can be traced back to the U.S. led invasion in 2003, former Prime Minister Tony Blair pointed out over the weekend:

"Even if you'd left Saddam in place in 2003, then when 2011 happened - and you had the Arab revolutions going through Tunisia and Libya and Yemen and Bahrain and Egypt and Syria - you would have still had a major problem in Iraq."Indeed," he said, "you can see what happens when you leave the dictator in place, as has happened with Assad now. The problems don't go away."

Unlike many foreign crises, the Iraq issue will have a direct impact on Americans. Oil prices are going up, fast. According to the LA Times:

As I am typing this on Sunday night, WTI was trading at $107.41 per barrel up another 74 cents over the weekend. That will translate to higher pump prices within a few weeks.

Another good reason to make higher and better use of North American oil and gas reserves.

I know how tired we all are of reading about Russian bullying Ukraine, and Assad killing his own people, and Egypt rigging its election to put in yet another strongman President, a Nigerian terror group stealing young girls, and now Sunnis and Shias squaring off in Iraq.

I am not at all in favor of sending American troops into any of those places and I certainly have no prescription for what to do next.

But, I do think it is an all of our interests to at least keep tabs on what is going on elsewhere in the world.

The world, as we have learned all too well, is a much smaller place than it used to be.