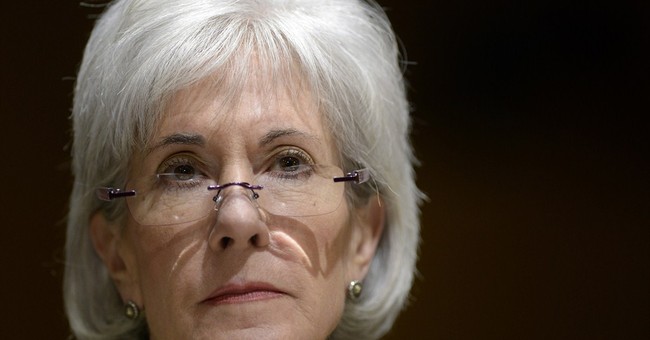 This is not going to be a screed against out-going Secretary of Health and Human Services, Kathleen Sebelius. I believe that most people who get into government at a senior position know they have a target painted on their back from the day they are nominated until the day someone comes buy to pick up the cardboard boxes from their office.

Yet they volunteer to do these jobs.

Now, back to the non-screed.

Last Thursday, Kathleen Sebelius announced that 7.5 million people had signed up for Obamacare and pronounced the program a success.

About four minutes later she announced she was resigning as Secretary of HHS.

About 37 seconds after that, even as the White House was maintaining that her leaving was Sebelius' decision, the President announced that the head of the Office of Management and Budget, Sylvia Mathews Burwell, would be his choice for the new Secretary.

About 36 hours after all that, Sebelius was quoted as saying, the rollout of Obamacare "was terribly flawed," and, according to ABC News, "The Obama administration's timeline for having ready the new health care law's online sign-up system 'was just flat out wrong.'"

All of which led me to wonder: Did Kathleen Sebelius keep her job after overseeing one of the most embarrassing roll-outs of a federal program since the launch of the Articles of Confederation because President Obama didn't think he could be seen firing a woman?

I understand all the defenses - I've written some of them - for senior governmental officials who on whose watch things have gone off the tracks.

She can't have known all the details about the Obamacare website.

She was give to believe that it had been load tested and approved.

She still has confidence in the people responsible to get this up and running.

Sebelius' biggest sin was not in overseeing Obamacare's breach birth. It was handing Congressional Republicans a gift of enormous, massive, gargantuan, Milky-Way-Galaxy-Wide proportions because, you may remember, the GOP had just finished shutting down the government over the issue of Obamacare as an unworkable program.

In announcing that 7.5 million people have signed up, the Administration may be press releasing itself into a corner.

First, we don't know how many of those 7.5 million signer-uppers have actually been billed for, or paid, their first month's premium. Those premiums aren't due (for most of them) until Tuesday, April 15th so Press Secretary Jay Carney should be ready with a number at the White House briefing on Wednesday.

Second, we don't have any idea how the insurance companies' actuaries will calculate the companies' exposure when they see how many young people, how many sick people, and how many middle aged people have signed up.

Shorthand: Premiums for next year may be reset much higher and/or with greater deductibles and those will be published prior to the mid-terms because the "open season" to change plans has to include their prices.

So, just as the GOP was on soggy ground claiming the website was proof of failure, the Obama Administration is skating on thin ice claiming the number of sign-ups is the test of success.

Secretary Sebelius has said she's hanging around until her successor is confirmed. Given the speed with which that process has been accomplished, she may still be in her office on Independence Avenue until the next President's choice for HHS has been confirmed.

After her comments this past weekend, I wouldn't extend the lease on the townhouse.

Speaking of whom, OMB Director Burwell was confirmed unanimously by the U.S. Senate and, my advice to Republicans there would be: Unless there is some really good reason to hold this up, go through the due diligence and confirm her.

Don't make Sylvia Mathews Burwell the poster child for everything you hate about Obamacare.

I don't doubt that Secretary Sebelius was less than candid in her appearance before Congressional Committees, but that's sort of in the job description for Senior Administration Officials.

In her defense - in Congress and on television - of the way Obamacare has been going, the only thing missing from the President was a statement like: " Doing a heck-of-a-job there, Sebbie."