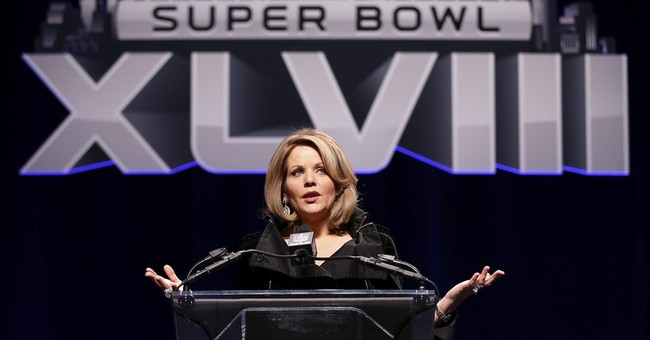 A few days before the BIG GAME, you can't swing a dead Palm Pilot without running into someone or something tied to Super Bowl XLVIII which, for those who might have cut the high school class that taught us Roman Numerals, translates to 48.

The first Super Bowl was officially known as the First World Championship Game and was played in the Los Angeles Coliseum on January 15, 1967 between the NFL champion Green Bay Packers and the AFL champs, the Kansas City Chiefs. Green Bay won that game 35-10. The next year, the game was officially named the Super Bowl and carried the designation II as that first championship game was retroactively designated Super Bowl I.

If you or your parents were part of those 65 million viewers, the chances were good that they watched the game on a black-and-white television. According to the FCC sales of color TVs didn't exceed 50 percent until 1972. And, it was almost a certainty that their black-and-white TV got its signal from a rooftop or set top over-the-air antenna. Cable was still in its infancy, or at least it's toddler stage, and wasn't even generally known as "cable." In the 1960s it was more commonly known as CATV - Community Access Television.

In 1967 the nation was still heavily involved in the Vietnam War, the first heart transplant was accomplished, the Academy Award for Best Picture was "In the Heat of the Night" starring Rod Steiger (who won for "Best Actor"), and the Monkees' "I'm a Believer" (written by Neil Diamond) topped the Billboard charts.

The first widely accepted personal digital assistant (PDA) known as the Palm Pilot, was still 30 years away. The first smartphone, as we know it now, was four decades in the future. In 1967 the Internet did not exist in any form. ARPAnet - its forerunner - wasn't in existence until 1969. rything from your new tablet to the thermostat in your den to the brakes on the tires of a Boeing 787.

As to wireless, the NFL has announced that it will block wireless access inside the stadium for the Super Bowl. Not because they want to sell more hotdogs and beer, but because there will be so many of the 88,000 fans watching the game live while streaming it on their wireless device to get stats and commentary, and uploading photos of the field as well as untold numbers of "selfies" that they will overload even the upgraded systems installed for the game.

This was not a problem in 1967 as the first cellular phone - the Motorola Dyna-Tac - would not be available to the public until 1983, 16 years later. That first phone weighed almost two pounds, had a retail price of $3,995, and wouldn't do much more than allow a user to send and receive telephone calls.

According to the Pew organization, in 2013 about 91 percent of all adults in America had a cell phone of any type and 56% of adults owned a smartphone - a category that didn't even exist prior to June 2007 with the introduction of the iPhone.

So, as you prepare to watch Super Bowl XLVIII on your HD TV with your tablet by your side for extra coverage and your smartphone at the ready to Tweet clever comments, eating tortilla chips and salsa (rather than potato chips and onion dip) remember that none of the technology around you existed when the first Super Bowl was played in 1967 and one of the two teams - the Seattle Seahawks - was still nine years away from playing its first game.

Pass those chips over here, please.

On the Secret Decoder Ring page today: Links to the NFL's official history of the Super Bowl and to the history of both the Seahawks and the Broncos.

Also a Mullfoto of one of those crucial infrastructure projects we keep hearing about.