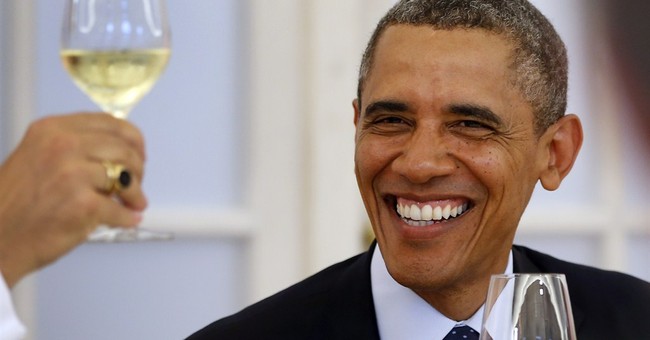 Most Presidents of the United States love going on an international trip. You get to fly on Air Force One. You get to travel around in The Beast that was flown over for your benefit. You get to stay in the biggest suite in a Western-style hotel. There are about 300 staffers from the White House and various Executive Branch agencies who have traveled ahead of you or with you to make sure your every whim is appropriately dealt with.

And, you get to meet with foreign leaders to remind them that, as Chevy Chase might have said on the old Saturday Night Live: "I'm the President of the United States … and you're not."

Essentially, the bubble in which Presidents live while they are in Washington, DC simply picks up and moves to where ever they need to/want to go.

Presidents generally get good marks when they're overseas. It's like that old saying that I can say whatever I want about my family, but if you say the same thing about my family you'll have a fight on your hands.

But, if the rule "Politics stops at the border" was ever true, it isn't any more. In 2009, CBS News reported that:

"Senate Democratic leader Harry Reid called President Bush "a loser" during a civics discussion with a group of teenagers at a high school [in Nevada].

Bush was in Europe at the time.

No one has called President Barack Obama a loser during his recently concluded trip to Europe but it would be hard to find a reason to celebrate any accomplishments.

The National Journal's Michael Hirsh - not exactly the go-to-guy of American Conservatives - wrote:

"There were the snarky words from Vladimir Putin, who expressed an almost Soviet-esque distance from Washington in his views about Syria. 'Of course our opinions do not coincide, the Russian leader said bluntly.

There was the coded warning from Chancellor Angela Merkel about spying on friends, and her and Obama's continuing frostiness over the issue of economic stimulus versus austerity.

"Above all, there was Obama's vague attempt at the Brandenburg Gate to capture some wisp of his past glory by pledging vague plans to cut nuclear arms and an even vaguer concept of 'peace with justice.'"

The EU countries' economies are foundering. According to Reuters "Joblessness in the 17-nation currency area rose to 12.2 percent in April." And among Europeans under 25, unemployment ranges as high as 50 percent in Greece and Spain and is well into double figures just about everywhere.

That was a bouquet compared to the review Obama got from a column in the U.K. Telegraph which described the President's Berlin speech thus:

"Barack Obama bombs in Berlin: a weak, underwhelming address from a floundering president"

"Barack Obama underscored again why he is no JFK or Ronald Reagan. In front of the Brandenburg Gate, Obama sounded more like the president of the European Commission than the leader of the free world."

Left or Right. U.S. or U.K. Barack Obama got few good marks from anyone from anywhere during this trip.

On top of all that, President Obama kept referring to the Chancellor of the Exchequer (the British equivalent of our Treasury Secretary) as Jeffery Osborne.

His name is George. George Osborne.

Imagine the projectile tears of derisive laughter among the MSNBC crowd if George W. had done that?

As we discussed earlier in the week, the President's standing among the American people is sagging under the growing weight of controversies. The aforementioned NBC News team looked into the numbers and found this:

The most pronounced shift in CNN's numbers over the last three weeks came among independent voters. Obama's approval vs. disapproval rating among independents went from 47 - 49 in mid-May to 37 - 61 in the most recent CNN/ORC poll.

According to the calculator app on my iPad that means that among independents Obama's rating has gone from -1 to -24 in just a month.

Maybe the answer for Obama is to join Justin Bieber on a trip into space aboard a Virgin Galactic rocket.

They can compare notes on the unfairness of it all.

On the Secret Decoder Ring today: Links to the EU unemployment problems, to Michael Hirsh's National Journal piece and to the U.K. Telegraph column. Also NBC's take on the CNN poll and the background of that Justin Bieber crack.