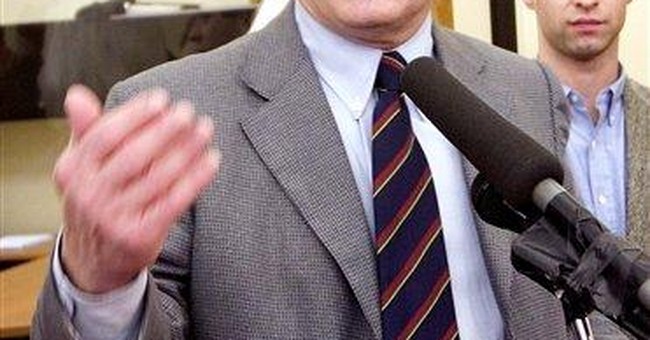 Alan Mollohan has represented the 1st District of West Virginia since he was first elected in 1982. According to the Wall Street Journal. "Mollohan took over the seat that had been held by his father, Robert Mollohan, since 1968. His father had previously held the seat from 1952-1956 as well."

Mollohan, who is the first House member to lose a re-election bid in the 2010 cycle, had been damaged by ethics allegations over the last few years and Oliverio actually ran to the incumbent's ideological right -- castigating him for his vote in favor of President Obama's health care bill.

U.S. Senator Bob Bennett, Republican of Utah got knocked off in a GOP state party convention over the weekend, but convention politics (like caucus politics) is a different political animal from a primary or general election.

If you don't believe me, ask President Hillary Clinton if she would like to re-think her 2008 caucus state strategy.

Nevertheless, every incumbent in Washington who is up for re-election should re-evaluate their primary and/or general election plans.

In Pennsylvania, three recent polls show U.S. Rep. Joe Sestak running ahead of Republican-turned-Democrat U.S. Sen. Arlen Specter. The most recent Rasmussen poll has Sestak +5 in a survey of likely Democratic voters. Sestak is pointing out that, while he was still a Republican, Specter voted against confirming Obama's pick for the U.S. Supreme Court, Elena Kagan, to be Solicitor General of the United States.

The Democratic Congressional Campaign Committee announced earlier this week it was bailing out of the special election in Hawaii which means that Republican Honolulu City Council member Charles Djou will probably win that seat which has been in Democratic hands for about 20 years.

Also in Pennsylvania, the special to fill the seat left vacant by the death of Rep. Jack Murtha will be held next Tuesday. The Daily Kos - the most influential Liberal blog - published a poll about 10 days ago which shows the republican, Tim Burns with a six-point lead.

The Democrats are so frightened of losing this seat (in which, despite a 2-1 Democrat registration, Obama's job approval is only 37 percent) they are bringing in Bill Clinton to campaign for the Democrat (a former Murtha staffer) Mark Critz.

Tim Burns is countering with a visit by Massachusetts Senator Scott Brown this coming weekend.

You don't think both sides think this is an important race?

The news last week that Rep. David Obey (D-Wis) was retiring, put another formerly safe seat into the "we-have-to-fight-for-this-one" category for the Democrats.

Obey is the 17th Democrat to retire against 20 Republicans who have called it quits. The difference is, almost all of the GOP retirements are in safe districts, every Democratic retirement in a swing district puts that district in play.

The current makeup of the U.S. House has the Democrats with 257 seats. You need 218 for the majority, so if the GOP can pick up a net 40 seats they would theoretically win the majority.

But, if Republicans win between 37 and 43 seats (or thereabouts) the battle for party-switchers will be fierce and will make those pay offs for votes on the Health Care bill look like Halloween handouts.

Meanwhile, over in London, Conservative party leader David Cameron was invited to form a government by Queen Elizabeth when the current PM, Gordon Brown, abruptly announced he was resigning in the wake of the election which saw his Labour party lose 91 seats in the 650 member House of Commons.

Cameron, was summoned to Buckingham Palace at about 8 PM local time last night, then went directly to 10 Downing Street to finish up the details of a coalition with the leader of the Liberal Democrats, Nick Clegg, whose party came in third, but holds the balance of power between the Tories and Labour.

Clegg will be the Deputy PM as part of the agreement.

Note, that the anti-establishment feeling among British voters put the two major parties which were out of power, into power; and, left the one party - Labour - which was in power out in the cold.