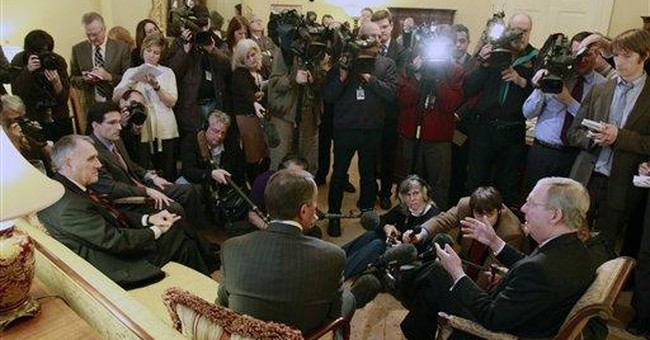 If you are looking for a reasoned and thoughtful analysis of the Health Care Summit yesterday … you're looking in the wrong place. I did not watch a single minute. And I don't regret it at all.

You may remember that I said I would rather watch three hours of Tiger Woods apologizing than watch this thing. Nothing in the run-up to the event made me change my mind.

I commend to you the trenchant analysis by Susan Page - one of the best reporters in the history of Washington reporters - who is the senior writer for USA Today which is available on the Secret Decoder Ring page.

According to Page's reporting, I was right:

Seven hours and thousands of words later, Obama made it clear that unless Republicans made significant and unexpected compromises, Democrats would press ahead on something akin to the $950 billion, 10-year health care plan he outlined on Monday - presumably by using a parliamentary maneuver that would bypass a Republican filibuster in the Senate.

Good use of time.

The best part of the coverage was Vice President Joe Biden being caught on an open mike saying, "It's easy being Vice President. You don't have to do anything."

If true, Biden is the most perfectly suited citizen in the land for that job.

The U.S. doesn't have a corner on the worldwide market for stupid. The Wall Street Journal has a story about Libyan leader Moammar Gadhafi calling for a "'jihad' or armed struggle against Switzerland."

Switzerland? The guys who dress up in clown suits and walk around the plaza in St. Peter's square at the Vatican? That Switzerland?

Old Moammar said that Muslims should:

Yeah, well, I don't know much about gee-AH-gruf-EE, but I know that Switzerland isn't generally known as a world shipping power. In fact as search on the phrase "Swiss Shipping" comes up with exactly three - THREE - ships which belong to "Swiss Shipping Line, Gmbh."

Turns out this is the latest volley in a long-running spat between Gadhafi and Switzerland stemming from the time when, according to the WSJ: Libya detained two Swiss businessmen, after Geneva police arrested Col. Gadhafi's son Hannibal for allegedly beating two servants.

Hannibal? What are his other kids names, Genghis and Charlemagne?

In other news, the Canadian women beat the U.S. women in the gold medal hockey game in Vancouver yesterday. The U.S. women had gone through the tournament beating their previous opponents by a combined score of 46-2, but they lost to Canada 2-0.

Canada is in fourth place in the medal count with 16 (8 gold, 6 silver, 2 bronze). Hockey is the home sport of Canada, so I'm glad they won.

Having written that, I will be rooting hard for the U.S. men's hockey team to make it into the gold medal game against the Canadian men and wipe the ice with them.

In other good news, lead investigative reporter for the Associated Press, Larry Marasak, is reporting that the House Ethics Committee has found that House Ways and Means Committee Chairman Charles Rangel

"Rangel's staff knew that corporate money paid for the Caribbean trips, the committee said, but it could not determine whether Rangel's aides told him about it."

Even in Washington, DC, where the suspension of disbelief is a drinking game, who can believe that Rangel jetted off to Antigua and St. Martin; where he assumedly ate, drank, and slept, but never asked who was picking up the tab?

Remember that pesky Sarbanes-Oxley law which requires that when filing official statements, the corporate officer in charge has the responsibility to certify that,

1. The signing officer has reviewed the report; and,

2. Based on the officer's knowledge, the report does not contain any untrue statement of a material fact or omit to state a material fact necessary in order to make the statements made, in light of the circumstances under which such statements were made, not misleading.

In real life Rangel would be sharing a cell with Bernie Madoff.