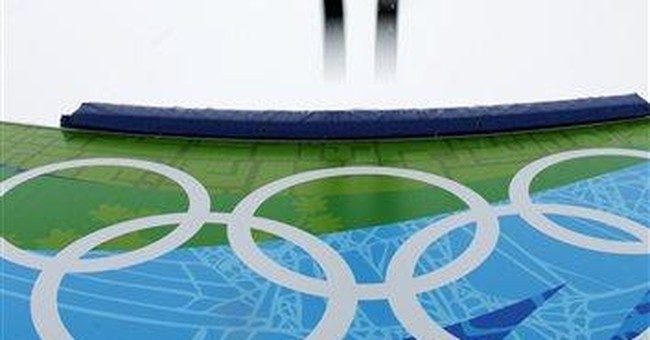 The Winter Olympics begin today with ski jumping qualifications this morning and the opening ceremonies at 6:00 pm local time. I looked this up for you: Vancouver, Canada is on Pacific Standard Time.

The Olympics will end on February 28 with the closing ceremonies. The last medal event? The Men's Ice Hockey finals earlier in the day. I guess we have the 1980 U.S. Hockey team and Al Michaels to thank for that.

The men's downhill should be transferred to Franklin Street in Old Town Alexandria, Virginia which is right outside my front door and on which there has been about 36" of snow this past week. I've bought a cowbell and am prepared to do that "yah-yah-yah-yah" thing that people who watch skiing events do. Or, at least, that's the way it has always sounded to me.

If global warming gets any worse I'm going to have to buy a snowmobile.

My favorite Winter Olympic event? Women's Biathlon. It is a combination of cross-country skiing and rifle shooting. Why is it my favorite? Athletic, attractive women. In skin-tight outfits. With guns.

If they allowed beach volleyball players to carry side arms I do believe it would be the perfect spectator sport.

Where was I? Oh. The Olympics. NBC has the TV rights again and I found the web page which tells me which events will be televised on which NBC-owned channel (NBC, USA, CNBC, Universal HD or MSNBC) and when. I couldn't find the Women's Biathlon but I'll study it more closely after I've finished this.

One of the best things about the snow in Your Nation's Capital was the Government - including the Congress - has been shut down since Monday. It will be open tomorrow, then closed again Monday for Presidents' Day.

The Congress, exhausted from not meeting this week, will take the next week off to rest up for the five straight weeks of work they will have to do until the two week Spring Recess starting March 28.

Forever I have hought that Will Rogers said, "The nation never sleeps so soundly as when the Congress is in recess," but if he did, Google didn't find it. I don't think I made that up. Let me know if you find it.

According to the Washington Post, government offices will open two hours late this morning and employees can take unscheduled leave but have to call their supervisors so it can be duly recorded.

The Post piece also pointed out that: "Telework and emergency employees are expected to report for work on time."

Emergency employees, I understand. But how do you know if a "telework" employee has hitched the bow in their bathrobe, stepped into their bunny slippers, come downstairs, made coffee, read the paper, and turned on their TV to start watching Law & Order reruns on USA on time or not? Dear Mr. Mullings:

Don't you very often work from home? Doesn't that make you a "teleworker?" Yes. But it's completely different in my case. I don't own bunny slippers. Anymore.

Final issue. This is serious. Consider this a finger being wagged under your nose.

Former President Bill Clinton had two stents inserted into a cardiac artery yesterday. The good news is that he went to the hospital and had the procedure done, which is fairly routine and should allow him to get back to work quickly.

The bad news is, according to some reports, he had started feeling chest discomfort a couple of days earlier.

I know a little something about this. I was diagnosed with cardiac artery disease when I was 39, had a long string of angioplasty procedures, and had by-pass surgery in 1998. I have been told a hundred times by my cardiologist: "Don't deny the symptoms."

President Clinton denied his symptoms and is lucky that he got away with it.

If you are of a certain age, and you feel any kind of discomfort in your chest, back, chin, and/or left arm - get to a hospital. Don't worry about being embarrassed. If it's nothing you don't have to tell anyone about it.

Think about how much more embarrassed you will be if you die of a heart attack.

Ok. I've got my nitros handy, and I'm going to look for the TV listings for the Women's Biathlon competition.