You Go to War With the TSA You Have 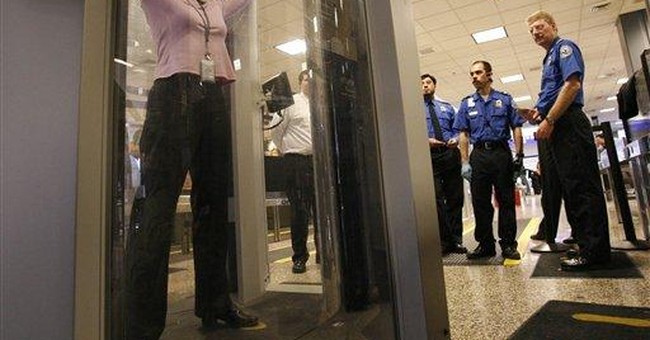 I liked my odds.

Two, or maybe all three, of the other members of the panel were singing hosannas to President Obama for what is a growing fiction, to wit: President Obama has taken ownership of the failures which led to the terrorist attack on that airplane near Detroit.

I called "Goose Cookies" and said, approximately, the following:

Barack Obama has used the first person singular - or its variants - more than any other President in history. He has not said "this is a failure of mine," or of "my administration," or anything remotely like it.

One of the defenses people speaking on behalf of the Administration have thrown up is the one about Sen. Jim DeMint (R-SC) having put a hold on Obama's choice to head up the Transportation Security Administration (TSA). The TSA workers are the geniuses who check hand bags and backpacks at security and, thus, upon whom we are dependent for the safety of our entire air transport system.

According to DeMint, he has not put a hold on Erroll Southers, but he objected to a request to have Southers confirmed by unanimous consent - that is, without a roll call vote. DeMint wants to discuss the notion of TSA agents being allowed to form a bargaining unit thus taking the safety of our entire air transport system out of the hands of the geniuses who check your hand bags and pack packs, and putting it into the hands of union executives.

In fact, DeMint said on TV yesterday that Senate Majority Leader Harry Reid could call up Southers' nomination for a vote any time but DeMint still wanted some discussion of the unionization deal.

Worth, it seems to me, a few moments of the Senate's precious time.

The point the Administration spokespeople have been making is that absent DeMint, Southers would have been busily working out the details of how best to stop terrorists from getting on airplanes in Amsterdam had not this unionization thing been going on for months and months.

According to the Congressional Record, the President sent Southers' nomination to the Senate on September 17, 2009. Not January 21 nor February 15. Not March 4 nor April 25. He sent it on September 17. According to my new Microsoft Excel 2010 that means 240 days elapsed between the day Obama was inaugurated and the day he got around to officially nominating a TSA chief.

The Democratic-controlled Senate received the nomination and sent it to two committees which acted on Southers sequentially, rather than at the same time. It was not until November 19, 2009 - 63 days later - that they got around to actually trying to vote on him.

Total time elapsed between Obama's inaugural and Senate floor action? 303 days. No holds. No filibusters. Just showing how important Obama and the Senate Dems felt this whole thing was, prior to Christmas day.

The elapsed time between DeMint objecting to the unanimous consent request and the attack by the Tighty-Whitey Terrorist? 36 days.

More on Erroll Southers. It turns out he was less than truthful to at least one, and perhaps both Senate Committees about the circumstances surrounding his misuse of a law enforcement computer to spy on his ex-wife's boyfriend.

Southers had told the committee that, while an FBI Agent, he had contacted a friend in law enforcement in California and asked if he would run a background check on the guy.

He got caught and was censured by the Bureau. But, that wasn't the way it happened. What actually happened was Southers ran the background check on his own. The business about asking a friend to do it was, how do I put this … a lie.

Naturally, Democrats are saying this happened 20 years ago and Southers is otherwise perfectly well qualified for the job of running TSA, the geniuses who - assuming you are not a Nigerian who has undergone terrorist training in Yemen and so can get on any US-bound aircraft on the planet - can put you on a no-fly list with no explanation and pretty much ruin your life on a whim.

As Donald Rumsfeld said, "You go to war with the Army you have. They're not the Army you might want or wish to have at a later time."

We're at war and, like it or not, this is the TSA we've got.