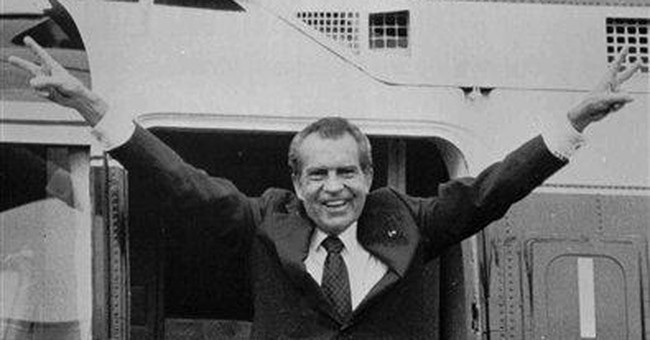 You may only know about "Watergate" because every scandal since then has been appended with the word "-gate." A part of the Watergate scandal was the publication of what became known as Richard Nixon's "Enemies List."

According to a memo from White House Counsel John Dean, this was a list of people whom were determined to be political opponents of the Nixon Administration and how the White House intended to "use the available federal machinery to screw our political enemies."

Most of the "enemies" were union executives, major fundraisers for Democrats, and cultural "radic-libs" as they were apparently called in the White House, like Paul Newman.

But what caught the public's attention was when the list was released and the Nixon White House targeted the managing editor of the Los Angeles Times, the chief political columnist for the Washington Star newspaper, and CBS correspondent Daniel Schorr.

According to broadcast lore, Schorr, who was covering the Watergate Hearings for CBS, found out he was on the list as he was reading it aloud on the air.

The notion of a President wanting to use the full power and force of the Federal government to intimidate people who disagreed with him, was appalling. It might have happened in every Presidency since Washington, but no one had taken the time to codify the process by putting it into an official memorandum.

And the concept of attempting to intimidate the press was, for many people, among the most serious of misdeeds by Richard Nixon.

So, where is the outrage over the public war the White House is waging against the Fox News Channel?

"Fox News often operates almost as either the research arm or the communications arm of the Republican Party. Let's not pretend they're a news network the way CNN is."

The drama continued on the Sunday news shows when Senior Advisor to Obama, David Axlerod said on ABC's "This Week" of Fox,

"It's not really news. It's pushing a point of view. The bigger thing is that, other news organizations, like yours, ought not treat them that way."

I can remember when CNN was a new concept and ABC, CBS and NBC news divisions didn't treat CNN like it was a serious news organization.

The Lad called last night and asked why the White House was doing this.

"The need an enemy," I said. The Democratic base is disenchanted with the Obama Presidency - even Saturday Night Live has decided Obama's stature has been sufficiently diminished that they can do a skit about how he hasn't accomplished any of the major goals he ran on.

The war in Afghanistan is a huge problem with the Liberal base, and Obama's apparent inability (and/or unwillingness) to hold Congressional Democrats' feet to the political fire over a public option in the health care debate is further causing head-scratching among that group.

Add to that, he hasn't paid off on "card-check" which he promised unions, and has limited his support for gay rights to speeches and dinners, and you can see why his polling numbers have settled in at just above 50 percent mark.

So, the Administration has decided to start a fight to re-energize the base. It doesn't do any good to fight with someone who is not worthy, if you want to make this strategy work you have to have the fight with someone your base already knows - and already hates.

If Obama can make the point stick, that Fox News is not "news", and gets his base to buy into the theory that Obama is the victim of unfair coverage, it gives the White House a rallying point.

I don't think it's having the desired effect. One of the outcomes of the political wars between Bill Clinton and Newt Gingrich is that the American audience for political news has become very sophisticated. They know what they want, and they know where to find it, whether it's Rachel Maddow on MSNBC or Glenn Beck on Fox.

The bigger issue is that few other news outlets - print or broadcast - have chosen to report on how dangerous this tack can be. The most dangerous type of news censorship is self-censorship.

That's where an "enemies list" can all too easily lead.