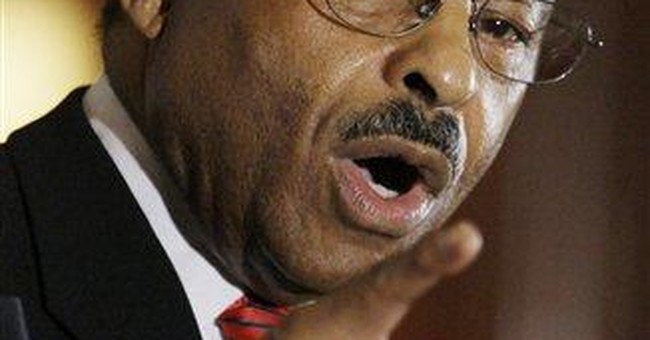 Oh, my. It makes my arms tired. With all the trouble on this planet - some made by us, most by others - you would think that our leaders on Capitol Hill would be working on those difficult and potentially deadly problems or, at a minimum, acting like adults.

Sen. Roland Burris (D-Ill) announced he won't be running for re-election having remembered that maybe he and his people perhaps had sort of offered to raise money for former Governor Rod Blagojevich. Not that he did anything wrong, mind you, but according to the Washington Post Burris has raised a total of $20,000 toward a 2010 race which is at least two orders of magnitude short of where he should be.

This isn't just a Democratic deal. Last month Republican Senator John Ensign (R-Nev) admitted to having an affair with a female campaign aide. Now it has been reported that his parents gave the woman, her husband and their kids gifts totaling $96,000 "out of concern for the well-being of longtime family friends during a difficult time."

John Ensign is not some 22-year-old who had a bad night. He is a 51 year old United States Senator whose mommy and daddy are still trying to buy him out of trouble.

Ensign isn't up for re-election until 2012 so this whole thing might have blown over by then, but you don't have to be James Carville or Karl Rove to assume it might be a campaign issue if he does run for re-election.

We've got one Governor who quit - Sarah Palin of Alaska - for no good reason. And another Governor who won't quit - Mark Sanford of South Carolina - in spite of having all the reasons the world.

Even sitting Members of Congress - in the House and Senate - who have no weirdness in their backgrounds are doing strange things.

The Washington Post's Dana Milbank covered a hearing held by Rep. Bart Stupak (D-Mich.) into the horrors being visited upon the people of the United State by those who sell … bottled water.

Michigan, you might have heard, has an unemployment rate of about 107.62 percent. Michigan has changed its state flower to the Tumbleweed. Yet, this genius spent your tax dollars to hold a hearing into bottled water.

To make his point, Stupi - Stupak had the regular ration of bottled water removed and replaced with pitchers of water from the city water supply. No one would drink it.

In fact, the hearing was deemed so important that not a single voting member of the Democratic side of the aisle even showed up.

Talk about a new version of Watergate …

But that wasn't the biggest waste of time by a member of the House or Senate yesterday. This was.

I got a series of e-mails from the office of a United States Senator asking if I might be available for a phone call and, if so, what would be the best number. Even The Lad was contacted in California to see if he had a number for me.

What could it be? What manner of national security advice might the Senator be seeking? Was it a matter of high-level political nuance?

Nope. This United States Senator tracked me down to tell me in his own voice that I was incorrect last week when I wrote:

Members of Congress get a tax break on their housing, have health care completely paid for by you and me, and have a pretty good retirement system although the other benefits are so good you can't get them to retire much before their 113th birthday, on average.

Members of Congress pay the same premiums as any other Federal employee for their health care which, not counting the active military, is the best deal in America.

As long as he had bothered me during the middle of three hours of NCIS reruns, I pointed out to him that if corporate CEOs spent as much of their stockholders' money on their personal care and feeding as members of the House and Senate spend taxpayers' money on staff catering to their every need and whim the corporate CEOs would go to jail and rightfully so.

Just for fun, I looked up the Congressional Calendar for 2009. You can read a summary of their backbreaking schedule on the Secret Decoder Ring.

Remember when I wrote that we should start a new political party? I'm right about that.