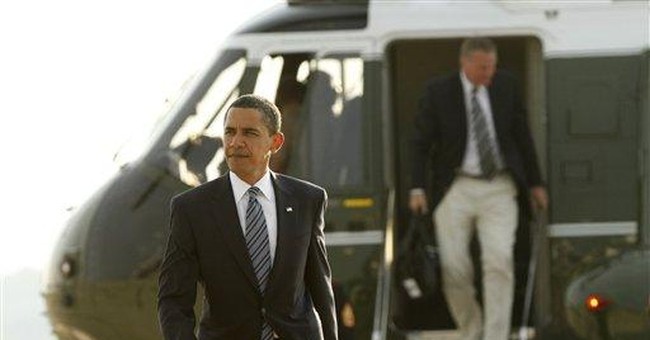 President Obama is off on a foreign trip to the Middle East and then to France. The Middle Eastern part of the trip is to, in Obama-speak, "re-set" the relationship between the United States and the Muslim world.

He will first meet with the King Abdullah of Saudi Arabia (which the Washington Post's Michael Shearer wrote was "a last-minute add-on." I mean, who would go all the way to the Middle East and not want to do a little shopping and sight-seeing in Riyadh?

Then its off to Cairo for what the White House is billing as a "major address" although in a typical White House two-step no one will say what the "major" part of the address will be other than to claim it will not be the unveiling of a new Arab-Israeli peace plan which, according to the Washington Post, is what many in the Middle East are looking for.

One person who is not looking for a major new initiative is Osama bin-Laden's number two guy, Ayman al-Zawahiri, who said, according to the BBC that President Obama's

"bloody messages have been received and are still being received and they will not be covered by public relations campaigns or theatrical visits or polished words."

If that weren't enough, the Post reported that al-Zawahiri "also said the Egyptian officials who will welcome the American leader are 'slaves' who have turned Egypt into an 'international station of torture in America's war on Islam'".

But, here is why being President is no walk in Lafayette Park. While Barack Obama is being pilloried by al-Qaeda on one side, some Democrats in Congress are questioning him for being too hard on the Israelis and not hard enough on the Palestinians.

According to Ben Smith's reporting in Politico, Democrats "question putting public pressure on Israel while - so far - paying less public attention to Palestinian terrorism and other Arab states' hostility to Israel."

ABC's Jake Tapper quotes Rep. Shelley Berkley (D-Nev) as saying, "I think it would serve America's interest better if we were pressuring the Iranians to eliminate the potential of a nuclear threat from Iran, and less time pressuring our allies and the only democracy in the Middle East to stop the natural growth of their settlements."

Rep. Anthony Weiner (D-NY), according to Ben Smith, said: "I would have liked to hear the President talk more about the Palestinian obligation to cut down on terrorism."

And that's just the beginning of the trip.

After he finishes in Cairo, the President is moving on to Germany for a visit to Germany where, again according to the Washington Post, "he will visit the former Buchenwald Nazi concentration camp and pay tribute to the victims of the Holocaust, and then visit the Landstuhl medical facility, where American troops abroad are treated."

Following that, Obama will join French President Nicolas Sarkozy and British Prime Minister Gordon Brown in Normandy to commemorate the 65th anniversary of the invasion of Europe.

It is not only the U.S. President who is sometimes tone deaf (witness Obama's dinner-and-a-show trip to New York 48 hours before GM's lawyers went to court to declare bankruptcy). PM Brown was not going to go to Normandy at all because he said, in essence, he only attended anniversaries divisible by 10, not those divisible by five.

But, it was reported that (a) Queen Elizabeth was put off because she hadn't been invited at all and (b) Brown's advisors reminded him that a lot of British veterans of D-Day would not be alive in five years so he might want to change his mind.