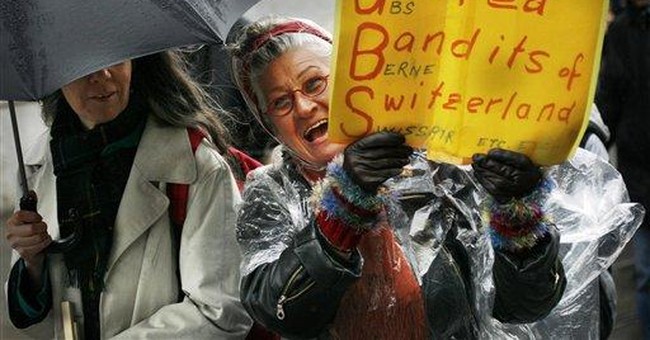 I was going to write an April Fool's Day column about how the President of the United States fired the CEO of General Motors and made it clear he wanted the majority of the board of directors to resign and how he was going to replace them with people from the Administration but I thought that was way, WAY too far fetched.

Then I was going to write how the President had appointed a guy to run an outfit named "Director of Recovery for Auto Communities and Workers," but I thought the "and Workers" part was too obvious even for Barack Obama, so that wasn't going to work as an April Fool's prank.

I mean, don't Workers count as part of the Community of Autos? Or did someone want to make certain that the UAW and the AFL-CIO understood they were going to be actually running the Auto Communities ere long?

Next I thought I might write a joke item about how "Health and Human Services nominee Kathleen Sebelius recently corrected three years of tax returns and paid more than $7,000 in back taxes after finding "unintentional errors.'"

The funny part was going to be a when I reported that the Associated Press headlined her appearance before a Senate Subcommittee as part of her confirmation process: "HHS nominee calls for health care fraud crackdown."

But who would believe that on the same day she admitted to missing by $7,000 on her taxes she would have the chutzpah to say she wanted to, "send the signal that there's a new sheriff in town."

No one would believe that, so I couldn't use it as part of my April Fool's Day column.

Then I thought it would be amusing to write that the Japanese Prime Minister dissed the German Prime Minister in the run-up to the G-20 meeting in the UK this week. I was going to suggest that Japan's PM Taro Aso told German PM Angela Merkel not to worry her pretty little head about it, but the Financial Times beat me to it writing that Japan feels "Germany has failed to understand why strong fiscal action is vital for recovery."

After I passed on a bullet point about how Treasury Secretary Tim Geithner had been given the power to decide how much every employee at every bank or financial institution should be paid, I was going to write about how the University of Kentucky went out and hired itself a basketball coach and was going to pay him $35 million over eight years.

I thought it was funny that a public institution could go out and pay a guy $4,375,000 a year to coach 12 teenagers what with public colleges being recipients of federal funds in the form of grants to researchers, tax dollars for teachers, and loans for students and all.

Goes back to Babe Ruth in the 1930's when he was asked what he thought about making more than the President of the United States, Herbert Hoover: "I had a better year than he did," Ruth is reported to have said.

Finally, ending up where we started with the car companies, I watched the press conference by the Obama-appointed Chairman of GM, Fritz Henderson claiming that GM would cover up to nine months of car payments for people who bought a GM vehicle then lost their job.

I thought that had to be an early April Fool's joke. Where would Fritz Henderson get the money to do that? I mean, that would be just about as funny as giving mortgages to people to buy houses who …