He Madoff With All the Money 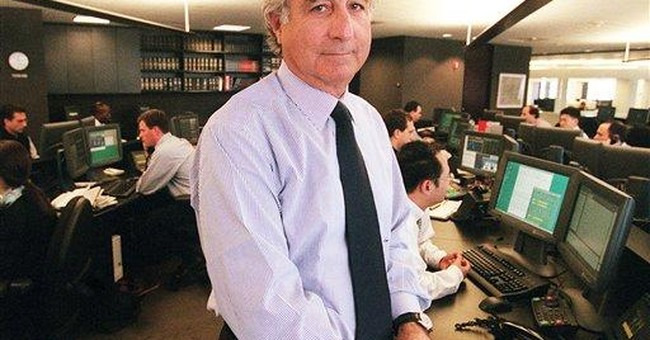 If the Fed and Treasury and the Security and Exchange Commission were looking for examples that would help begin restoring confidence in the world's financial system Bernard Madoff put a stop to that foolishness.

For those who don't wake up every morning and tune the TV to CNBC, here's the thumbnail.

There is a guy named Bernard Madoff who ran an "investment advisory service" meaning, according to the Wall Street Journal which knows about things, he "managed money for high-net-worth individuals, hedge funds and other institutions."

People gave him money and he invested that money for them and, if he made money - which he always did - he distributed some of that to the investors and kept some for overhead and his firm's profit.

Bernard Madoff had a lot of clients with a lot of money. Over several decades he took in some $50 billion from his clients and told them he was making them money each and every month.

According to reports, the Madoff operation was only open to investors upon invitation. That is, he didn't have salesmen or brokers. He relied on existing investors at country clubs and in big business to tell their friends and clients about the regular-as-clockwork returns they were getting on their money which was invested with Madoff.

As with the best scams, the marks begged to be allowed in and Madoff, upon the recommendation of existing clients, would permit them to write him a check.

According to Forbes Magazine,

His firm was remarkable for returning consistent gains to investors for years, even in up and down markets, a fact that probably led investors to feel a false sense of security and enticed new investors into the fund.

One and two percent-per-month returns aren't earth shattering. But returns of 10 percent per year, year in and year out, add up - especially for schools, charities and foundations who are generally not looking for one big score but for long-term growth.

It turns out that Mr. Madoff was running what is known as a "Ponzi scheme" named for Charles Ponzi who, while not inventing the technique, made so much money in the 1920's it carries his name.

What happens is, I convince you to invest money in some enterprise and promise a rate of return. If I am a crook - but a good salesman - I pay you the promised return, not from profits of the enterprise but from the money I take in from the next investor. Then I pay the second guy with the money the third guy invests with me and so on.

Sooner or later I run out of people to give me money, so there is nothing to pay the later investors with and the scheme collapses.

Bernard Madoff didn't promise fabulous returns. He promised stability and long-term profits, so as word spread that this was a safe haven with pretty good returns, more and more people came in, allowing him to sustain the scam because every new dollar was a dollar he could use to pay off the previous investors.

But, because of the dreadful economic and market conditions, investors wanted, or needed, to take their money out of his company to pay off other bad investments, to pay off their investors, or to put under their mattress. Some $7 billion worth of investors wanted their money. Madoff, of course, didn't have it, and so his business collapsed and everyone who invested with him has lost every dime.

These were not people responding to e-mails promising huge profits on penny stocks. These were educated, wealthy, intelligent people who knew, or should have known, their way around a prospectus.

According to Forbes' columnist Neil Weinberg:

There are no bigger oxymorons in finance than the terms "smart money" and "sophisticated investors." Too often they describe suckers willing to suspend critical thought in exchange for entry into an exclusive club with a velvet rope out front.

Wall Street does not serve free lunches. It does not grant rewards without risks. Those universal truths apply equally to money whether it's dumb or smart.

Charities, college endowments, foundations doing good works all lost millions or billions in the scheme. They wanted in and, as every fiction writer - author or crooked fund manager - needs from his audience, they suspended disbelief.