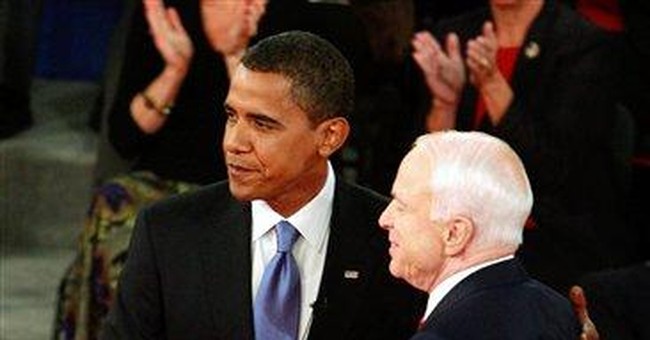 This is a good format for McCain. He has done this maybe 13,000 times over the past eight or nine years. Obama is good at this as well, but appears to me to be rehearsed.

If so, on the question about national priorities, Obama's rehearsals worked. He had the advantage of going second and nailed it.

When I take over the world I will outlaw those silly dial lines as CNN was running. I'm perfectly capable of deciding whether I like what one of the candidates is saying without my opinion having to override how some people I don't know are responding.

Tom Brokaw had no control over the program. I don't know why the candidates decided to have a one-minute rule, but no United States Senator in the history of the United States Senate has been able to say "hello" within one minute, much less discuss tax policy.

That reminds me of one of the high points of the Fred Thompson campaign when, during an otherwise dreadful debate in Des Moines the candidates were asked to raise their hands in response to a question and Fred said "There isn't going to be any hand raisin' today."

As I suspected, for the first half of the debate both candidates were throwing jabs, but no heavy leather. If I were advising either of these campaigns (which I am not) I would have said to make this debate a holding-pattern-debate and save the artillery for the third debate next week when I would fire for effect.

At the top of the hour - two-thirds of the way in - I thought (a) this was crashingly boring and (b) they were both pretty good. Obama was trying to get under McCain's skin but McCain was not taking the bait.

For the most part they used their stump speech segments to answer the questions without paying much attention to one another.

At 70 minutes in, even the dialers appeared to have gone out to Starbucks for a break.

I now feel like I'm in a rocket ship travelling at 185,000 miles per second and, as Albert Einstein predicted, time has slowed to almost a dead stop.

Who won? Neither. It was the rhetorical equivalent of bobbing up and down in the water.

Here's my suggestion for the final debate: A tag-team match. Obama/Biden v McCain/Palin.

Oh, wait! I have another idea. After 45 minutes in the final debate the VP candidates will have to switch sides. Biden will have to team with McCain and Palin with Obama.

Why the Chances for a Republican Senate Takeover Just Increased Dramatically
Townhall
'Brokeback Mountain' trends as Variety explains that white homophobia doesn't fully account for 'Bros' bombing
Twitchy
Ye and Candace Owens Sport 'White Lives Matter' T-Shirts, the Left Melts Down
Redstate
The GOP Must Capitalize on the Huge Opportunity in Front of Them With Hispanic Voters
PJ Media