A Pit Bull With Lipstick 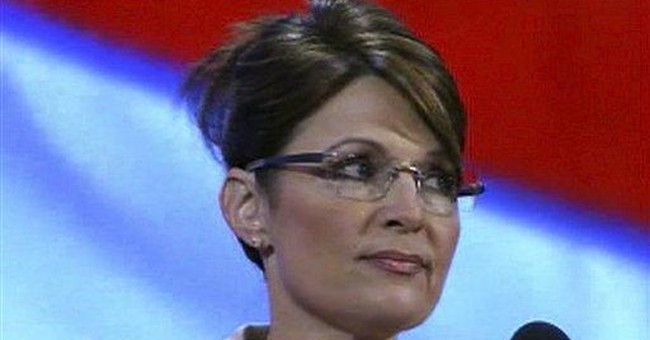 All day long you could feel the tension rising over the speech of Gov. Sarah Palin here to accept the nomination as the Republican Party's nominee for Vice President of the United States.

In interviews from a California TV station to a New York City radio station to Al Jazeera everyone wanted to know what Gov. Palin would say and how she would be received.

Talking with GOP delegates, operatives, and hangers-on the talk was about Sarah Palin and her speech. At least one of the cable news networks had a bug in the lower right-hand corner counting down the time until her speech.

Everyone - including me - had a theory about "what she has to do tonight" to win over the convention and the larger TV audience. Would this untested Governor from Alaska be able to pull it off?

Due to the generosity of the finance director of the Republican National Committee, Gretchen Purser, I had credentials which allowed me to go on the floor of the convention. I took advantage of that and decided to move to the floor for Palin's speech.

Mayor Rudy Giuliani gave the keynote speech just before Gov. Palin. He was to have given that speech on Tuesday night, but because of the changes to the convention schedule due to hurricane Gustav, it was moved to last night.

He was great, too. But we already knew Rudy could deliver a speech - even one which sounded like it was a closing argument to a jury in a case against a major criminal.

Sarah, on the other hand had two burdens: One, her speech last Friday from Dayton was so good that she had set the personal speech bar pretty high. Two, the ferocity of the attacks against her by the Democrats and their allies in the media might have put her on the defensive.

The loudest sound I have ever heard - short of a mortar going off way to close to me - was being on the floor of Ohio Stadium during an Ohio State-Michigan game about 127 years ago.

The second loudest sound was standing on the convention floor last night when Sarah Palin was announced onto the stage. By my informal count, the cheering went on for a full three-and-a-half minutes.

She came right out of the box talking about her family - all of them - in terms which any mom, proud of her brood, would have recognized.

That out of the way, she described her life as a small town mayor. "It's sort of like being a community organizer," she said, (a clear reference to Sen. Barack Obama's claim to fame that he was a community organizer in Chicago) "except that you have actual responsibilities," she concluded.

There was some question as to whether she should sustain a line of attacks against Obama which is typical of the role of the Vice Presidential candidate.

One of my favorite lines in the speech was this:

I don't know who wrote it. But I know who delivered it. With exactly the right pacing.

The line which got the biggest roar of approval was an ad lib. The speech text reads:

I was just your average hockey mom, and signed up for the PTA because I wanted to make my kids' public education better.

Palin, paused, looked around the hall, and said: "You know what the difference is between a pit bull and a hockey mom? - beat - Lipstick.