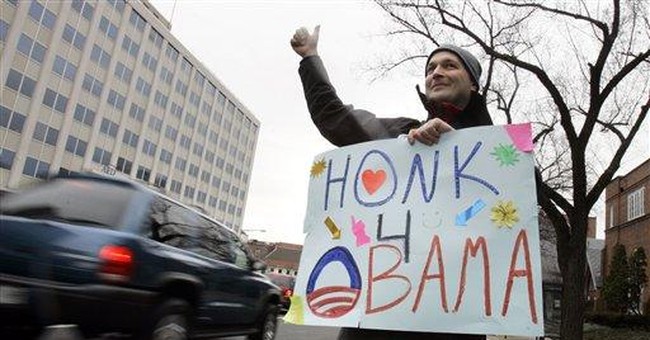 According to CNN, Barack Obama took the lead in elected delegates as the result of the primary election in Virginia last night.

That is something the Clinton campaign never considered as a possibility 14 months ago when that campaign got cranked up.

Yesterday morning, on an appearance on Fox & Friends (which will now be a regular Tuesday morning gig at 7:15 Eastern with Bob Beckel) I suggested that if I were running the Clinton campaign I would put Bill on the phone to Democrat state chairmen with this pitch:

Mr. Chairman? This is Bill Clinton. I want to help you raise some money for the general election in November.

If you will get 75% of the Super Delegates from your state to support Hillary at the Convention in Denver, I will come into your state and help you raise one million dollars between August and November. Do we have a deal?

Any state chairman - Republican or Democrat, Libertarian or Green Party - would be hard pressed to turn down that offer.

On the Republican side, John McCain won all three primaries last night each of which was winner-take-all. The result was McCain gained 113 delegates, Mike Huckabee gained none. So as of this writing, McCain now has 812 delegates to Huckabee's 217.

The magic number on the GOP side is 1,191 so McCain is about 2/3 of the way to the nomination as he is now only 379 delegates from a clear majority.

If you think Huckabee is making a run at McCain consider this: Mitt Romney exited the race a week ago. Romney still has 69 more delegates than Huckabee, meaning Huckabee remains in third place behind a guy who isn't in the race anymore.

Huckabee's supporters will point out that they beat McCain in the southern and western - the very conservative - counties in Virginia.

But, McCain got 50% of the votes in the Virginia primary. That, in any multi-candidate election, is a significant win because, as in this case, even if Huckabee could have added Ron Paul's votes to his own, he still wouldn't have beaten McCain.

McCain got about 55% of the votes in Maryland (which, at this writing had only about 34% of the votes counted) and 68% of the votes in the District of Columbia. As there are only 15 Republicans in all of DC, that means McCain beat Huckabee 10 votes to 5.

Back to the Dems. Hillary Clinton's campaign is now officially in freefall. She hasn't won a single contest so far in February. As noted above, Obama is now ahead in the delegate count and it is now becoming possible he can wrap this up on March 4 in Texas and Ohio.

Clinton fired her campaign manager and deputy manager this week in an effort to quell the rumblings among her supporters and donors. There is nothing to suggest the basic tenets of her campaign are going to - or even can - change.

Clinton has stated that the primaries in Ohio and Texas on March 4 are her campaign's fire wall. If she loses one or both - even if the delegates awarded are pretty much even - her campaign will be the equivalent of a giant star which, having exhausted its nuclear fuel, collapses into a black hole.

With his wins in Virginia, Maryland and The District, Barack Obama is now officially on a roll. If the Clintons can't find some way to stop him and stop him quickly, the Democratic race may be over much sooner than we thought only a week ago.

Here's something we know: A Clinton cornered is a very, very dangerous political animal. Obama's supporters would be wise not to start celebrating too early.