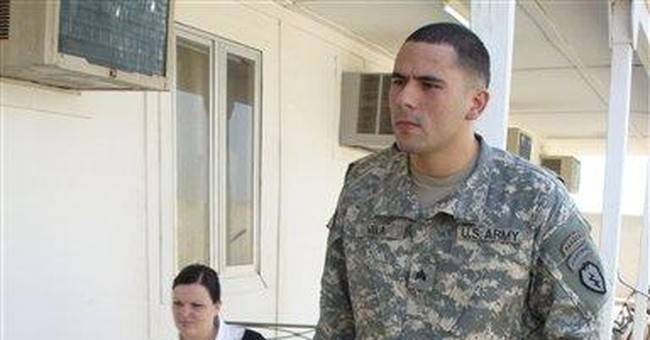 Listening to more than a few liberals, you’d think that the biggest problem in the world today is the United States. The “blame America first” crowd also foolishly wants us to give up our sovereignty, our security and our heritage. It’s nauseating.

“Liberty’s Best Hope,” a new book by Kim Holmes, vice president for foreign policy at The Heritage Foundation, boldly proclaims the truth: The United States and our republican democracy is the only true hope for the oppressed nations in the world. If we don’t step up to the plate and accept the responsibility that comes with the many blessings we enjoy as a free nation, then our future -- and indeed that of peace-loving people around the world -- is bleak, at best.

To fully understand where America fits into the “global community,” it’s helpful to hear from an experienced observer and statesman such as Holmes. A former Assistant Secretary of State for International Organization Affairs, he has directed The Heritage Foundation’s foreign policy research for nearly two decades. From the need for comprehensive missile defense to protect our nation and our allies, to the sorry state of the United Nations, to warning of dangerous, rogue regimes that pose a real threat around the world, Holmes addresses the vital issues of our day with the voice of authority.

As Holmes explains, a fundamental question should frame the debate over all U.S. foreign policy, including our role in Afghanistan, Iraq and the wider War on Terrorism: What’s the purpose of American leadership? Is it merely to remain the big kid on the global block, as our detractors -- both at home and abroad -- would have us believe? As Holmes boldly proclaims, the overriding mission of American leadership must be the defense and promotion of liberty.

It’s part and parcel of our character. The United States, in the words of former British Prime Minister Margaret Thatcher, “is the most reliable force for freedom in the world, because the entrenched values of freedom are what make sense of its whole existence.” If we fail to lead, we fail the cause of liberty.

The title of Holmes’ book comes partly from Thomas Jefferson’s first inaugural address, where our third president called our form of government the “world’s best hope.” Why? Because it’s designed to preserve and protect freedom.

Imbued with this mission, we need to take a clear-eyed look at home and abroad to decide what needs to be done to keep the United States strong and the cause of liberty alive. Here “Liberty’s Best Hope” proves particularly valuable. Holmes takes us on a tour of the world’s hot spots and leading actors -- one you’ll never get just watching the evening news. Consider his unflinching take on Russia and China:

“They talk a great internationalist game but are not averse to threatening their neighbors (China against Taiwan), allowing genocide (China in Sudan), or scuttling peace efforts in the Balkans or the Mediterranean (e.g., Russia backing Serbia and Cyprus in the U.N.) when it suits their national interests. China and Russia are not what they pretend to be.”

Those who think the solution is to work out our differences at the United Nations will get a much-needed education from Holmes. Despite the fact that the U.N. charter calls for the expulsion of member nations that fail to uphold basic human rights, the U.N. is home to some of the world’s most repressive regimes, which routinely work to subvert the actions of freedom-loving nations. Yet we keep trying to make it work. The result? “Through countless efforts to work with the U.N., Washington has unwittingly fallen into the trap of conferring more legitimacy on the United Nations than it deserves,” Holmes writes.

The fact is, you sometimes have to play tough in a dangerous world -- you have to confront evil head on -- if goodness is to survive. And if this makes some nations unhappy, so be it. Because of the global nature of America’s interests, we’re always going to be ruffling some feathers, Holmes points out:

“The only way around it is for the U.S. president and his cabinet to understand at times they will have to endure some bad feelings and controversies from friends and allies. … Other countries drive hard bargains because they believe in their own values and interests. China and Russia are ready examples. We should do the same without apology. If tone and style matter, then do it with a smile and without bluster. By all means, learn other customs and be sensitive to them, but be no less forthright in the assertion of our interests than other nations are.”

“Liberty’s Best Hope” reminds us that America truly is the beacon of hope for the world, as President Reagan so eloquently said. Our grandchildren and their grandchildren, and the offspring of people we will never meet living in far away places around the world, are depending on us to be true to our sacred calling.