U.S. Senate Fails to Protect Babies Born Alive from Abortion. May God Have Mercy on Us as a Nation

Rebecca Downs
|
Posted: Feb 28, 2019 12:15 PM
Share   Tweet
The opinions expressed by columnists are their own and do not necessarily represent the views of Townhall.com. 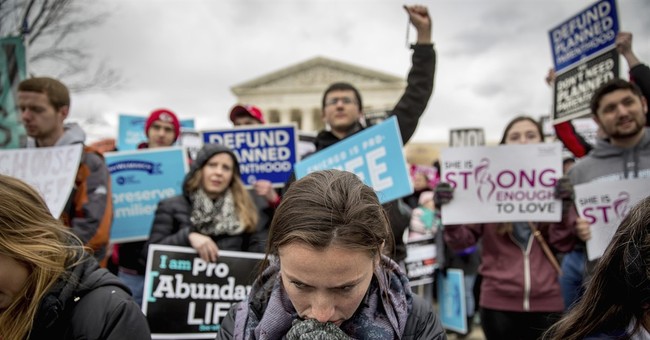 The U.S. Senate voted on February 25 on the Born-Alive Abortion Survivors Protection Act. The bill had nothing to do with regulating or restricting abortion itself. Instead, the act would have legally obligated that a physician provides the same medical care to the baby born alive from an abortion attempt as a “wanted” baby who was born at that gestational age. Not only is the woman not held liable in a failed abortion attempt, but she would have been able to seek damages over medical care not provided.

The bill earned 53 votes but required 60 votes to pass. Forty-four Senators, all Democrat, voted against protecting babies born alive from an abortion. Three Democrats voted in favor of the act, including Doug Jones, Joe Manchin, and Bob Casey Jr. No Republican voted no, though three did not vote. Senators Lisa Murkowski, Kevin Cramer, and Tim Scott.

Under the 2002 Born-Alive Infants Protection Act, which was approved by unanimous consent, a baby born alive from abortion is legally recognized as a human person. What makes this 2019 act, sponsored by Senator Ben Sasse of Nebraska, necessary, is that the law does not say what happens to these legal persons.

Babies are born alive from abortions, and then, they are left to die.

Testimony from medical professionals, findings from a Congressional committee, and data from the Centers for Disease Control and Prevention (CDC) tell this reality. Those who are lucky to have survived abortion attempts and be alive today to share their stories are a further powerful form of proof.

That was not a reality most Democrats seemed to be willing to accept.

A handful of Democrats used time on the Senate floor to speak out against the legislation. Many railed against efforts to regulate and restrict late-term abortion, which was not up for debate. They talked about abortion, in a bill to do with infanticide. Either these 44 senators didn’t do their job of reading and considering legislation they’re tasked to vote on, or they support infanticide. Neither option bodes well, especially with 2020 approaching.

Many senators will soon be up for re-election. A handful has their sights set higher, on being the Democratic nominee to be President of the United States, including Elizabeth Warren, Bernie Sanders, Kirsten Gillibrand, Kamala Harris, Amy Klobuchar, and Cory Booker. All of them voted no on this bill. That same evening after casting his no vote, Senator Sanders then participated in a CNN town hall, where he emphasized his view that healthcare is a human right.

Speaking about these Democratic candidates on The Story with Martha McCallum, Senator Sasse on Monday night pointed out how “almost all of them declared their candidacy by saying they stand for the voiceless, they stand for the most vulnerable, they stand for the weakest and the neediest among us, and today they had a chance to actually cast a vote for those little boys and girls who really are the most vulnerable and the weakest and the neediest among us, and it turned out that was just a whole bunch of rhetoric and a bunch of nonsense about what they actually believed and I think the American people are going to notice that kind of thing.”

Such votes are consistent with Democratic Governor Ralph Northam of Virginia, who endorsed infanticide when expressing support for a bill which was considered in the Commonwealth known as the Repeal Act. “If a mother is in labor…the infant would be delivered. The infant would be kept comfortable. The infant would be resuscitated if that’s what the mother and the family desired, and then a discussion would ensue between the physicians and mother,” Northam said during a radio interview. When he sought to clarify his remarks, he in many ways doubled down on his support for infanticide.

No matter one’s view of abortion, at any stage, 60 Senators, if not 100 Senators, should have been able to vote in favor of protecting babies from infanticide. With their no votes, 44 Senators voted against the most innocent, defenseless, and vulnerable in our society, against a baby who has been born and who have been granted legal rights, but whose legal rights remain not sufficiently legally protected.

While he was shocked by all 44 votes, Senator Sasse did express optimism about people being “exposed” to the medical technology of sonograms, and the window to the womb that provides, with how “a 3D image of a baby shows a baby and if you see a baby, you tend to think that a baby has dignity, and worth, and rights, and we don’t get to just decide to kill a baby,” he said. “And so I think the pro-life movement is going to be the way of the future because there are more and more images and more and more imaging technology becoming available.”

Senator Sasse concluded his appearance by sharing his view that his bill will ultimately pass and that this will be about “having a heart.” Our nation may still lack sufficient protection for babies surviving abortion attempts, but we can hope that Senator Sasse’s words will come to fruition, for the sake of our soul as a nation.