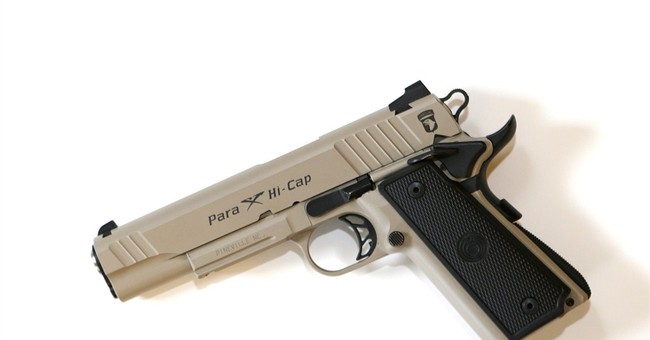 Lawful gun owners contend their First and Second Amendment rights have been stripped from them by lawless family court judges and disgruntled ex-partners.

“I have never alluded to or committed violence against the children or her,” said Edward F. Taupier, a Connecticut father involved in a divorce battle with his estranged wife. “I have been ordered not to possess a firearm and my pistol permit has been revoked.”

In September Mrs. Tanya Taupier filed a full protective order in Middlesex County Criminal Court stating she was in fear for her life without offering proof that her former partner of 12 years has a proclivity to violence, he said. “The full protective order failed to cite a statute that was violated.”

Taupier, who was charged with harassing a family court judge in August, said his firearms and ammunition had been forcibly removed by authorities. The harassment charge stemmed from a private email-rant he sent to seven people complaining about the actions of Superior Court Judge Elizabeth L. Bozzuto, the judge assigned in his divorce proceeding, he said.

“The prosecuting attorney admitted there was no evidence Bozzuto ever received a threat, and no evidence that I talked to Bozzuto about a threat,” said Taupier, who is a former Wall Street chief officer at Citibank. “My wife took the harassment charge and misapplied that charge to her and the children.”

Three months later, the criminal court threw-out the full protective order on the basis of misapplication of the law to include his wife and children in the charge, he said. The initial risk warrant that allowed a high risk SWAT team to take his firearms and ammunition in the first place was similarly determined to be invalid in criminal court.

The harassment charge case, which is ongoing, furnishes Taupier on a 24-7 lockdown; he is forced to wear two GPS monitoring ankle bracelets, and is not permitted to exit the home except for a medical emergency or a court appearance, he said. “All of my rights have been arbitrarily taken from me.”

Dan Brewington, an Ohio father, was involved in a divorce and child custody case for two and a half years in Dearborn County, Indiana that resulted in the unfair, complete dissolution of the relationship between him and his daughters who were three and five years old at the time, he said. “I have not seen my kids in five years.”

Brewington, who is an avid hunter, reported on his personal blog that the decision by family court judge, James D. Humphrey, to separate father from daughters, albeit a charge of abuse or neglect, amounted to child abuse. He criticized the court for irresponsibly ordering Brewington to give his ex-wife – someone with little experience handling firearms – the .357 Magnum revolver he legally owned.

When Brewington continued to publically criticize Humphrey and the system for making his children fatherless, he said Dearborn County Prosecutor F. Aaron Negangard commenced an assault against his First and Second Amendment rights. “I was punished for questioning a broken system.”

Brewington, who is an electrical engineer, would serve two and a half years of a five year prison sentence for attempted obstruction of justice and intimidation of a family court judge. He said although the prosecutor failed to articulate a specific and immediate threat to Humphrey or show evidence of any violence exhibited on his part, he was wrongfully convicted of these charges. “There are no accusations of abuse, adultery, drug or alcohol abuse, no social services or police reports, no reports of girls not loving their dad.”

Both family and criminal courts used the mere fact he owned a legal .357 Magnum revolver as a reason to demonize him, said Brewington. “In both proceedings, the words ‘.357 Magnum’ was used repeatedly to make me sound scary.” The inference was that owning a scary-sounding gun would be the impetus to committing a crime, he said.

Brewington, whose story is part of the film “Divorce Corp.” which documents the flawed divorce industry, moved to appeal the conviction. After the Indiana Supreme Court upheld the lower court’s decision, he said his Pro Se Petition for a Writ of Certiorari to the U.S. Supreme Court was denied review.

“There are no Second Amendment rights in Indiana in a divorce,” said Brewington. “If you try to exercise your First Amendment rights and complain about the actions of Indiana judges, you will quickly lose those rights as well.”