The Conservative Case Against Torture 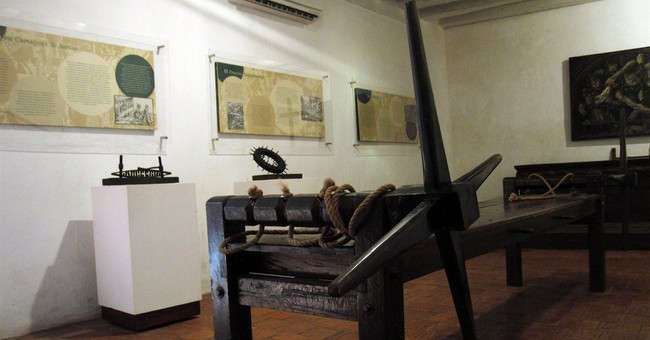 Torture is an irresponsible policy for the United States because it signals to the entire world that the beacon of freedom is lowering the legal bar on what it means to be a human being. Until recently, the US did not permit torture of foreign prisoners, but rather took care of those who were under our custodianship as part of our exceptional spirit of respecting individual human liberty. This stems from the notion that “the degree of civilization in a society can be judged by entering its prisons.” If that is true, then America failed to live up to that ideal.

Torture carries with it a degradation of the human condition and a reduction of the human body to a mere object. The Founding Fathers understood this and thus prohibited torture via the principle against cruel and punishments in the Eighth Amendment. They believed torture to be universally inhumane; to quote Patrick Henry, “What has distinguished our ancestors? That they would not admit of tortures, or cruel and barbarous punishment.” Thus, US law prohibits cruelty and unusualness in criminal punishments. To further that principle’s reach, the US has adopted an entire national and international legal scheme to prevent torture and like offenses against dignity, which includes the Federal Torture Statute, the Detainee Treatment Act of 2005, Common Article 3 of the Geneva Conventions, and the Convention Against Torture.

Unfortunately, modern abuse of torture is an international problem. The actions of other western nations are precedents for America and vice versa. Based on a 1978 European precedent about the British use of “deep interrogation” against Republican freedom fighters in Northern Ireland, Alberto Gonzales argued in a 2002 memo that the atrocities of one nation can be viewed as “permission under international law” to justify torture. Presumably, he did not realize the almost unbelievable irony of taking a British precedent to justify torturing rebels as a part of American jurisprudence.

Britain is not the only Western-style liberal democracy whose case law was seen to buttress the American torture regime. In 1999, the Israeli High Court allowed psychological pressure and moderate physical pressure to be used against terrorist suspects. Although the extent of the American regime apparently went beyond what Israel considers acceptable, the list of precedents from Western-style democracies to justify degrading human rights will only continue to get longer if America is deemed to condone torture.

Lowering the bar on this degrades the dignity of persons and accordingly, the reach of their human rights. Who could reasonably call torture cruel and unusual punishment if every Western society practices it? A common argument advanced in favor of barring torture is that it gives foreign terrorists an excuse to do the same to our uniformed soldiers. While that is a concern, torture is a much more disturbing and far-reaching issue than what Islamic militants may do to U.S. troops.

America has built a moral, social, and political infrastructure to prohibit the systematic degradation of the human condition within its jurisdiction, even when its enemies do not abide by those same lofty standards. Moreover, America and voting Americans have access to mountains of data showing that torture is ineffective, like the recent Senate Report reaffirmed. This endangers our troops in inevitable future combat, against any enemy—even developed nations who may now see our own torture program as “permission under international law” to create their own degrading methods of treating prisoners.

The Eighth Amendment, a clause that prohibits cruel and unusual punishments, was created to protect us from abuse at the hands of our government. The more that Americans and the West practice and institutionalize torture, the less unusual torture becomes, and the less it will be considered cruel to do ever-crueler things. The Supreme Court looks to objective indicia of society’s standards on the cruelty and usualness of punishments. A nation that endorses torture of its enemies is more likely to erode domestic protections against torture—and historically, even parchment barriers, like the Bill of Rights, have not stopped governments from treading on minority freedom. Americans must be vigilant that our ideals of human dignity are upheld by our government, even in times of danger.

While it is perfectly acceptable to have a zealous desire to defend one’s home and people, safety must not come at the expense of the fundamental principles that make America the “City on a Hill.”