Paul Volcker's Call For A 'New Bretton Woods' Is Important 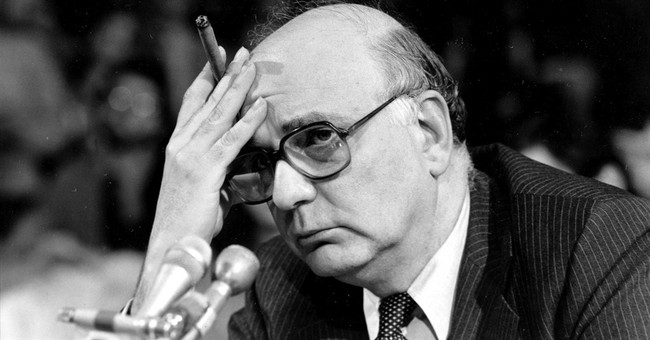 Trending
Seth Lipsky, the editor of the storied New York Sun (a brand distinguished by the long residency of Henry Hazlitt), recently, in the Wall Street Journal, brought to wider attention certain remarkable recent comments by Paul Volcker. Volcker spoke before the May 21st annual meeting of the Bretton Woods Committee at the World Bank Headquarters in Washington, DC. Volcker’s remarks did not present a departure in substance from his long-standing pro-rule position. They nonetheless were striking, newly emphatic both by tone and context.
Volcker, asked by the conference organizer for his preferred topic, declared that he had said:

“What About a New Bretton Woods???” – with three question marks. The two words, “Bretton Woods”, still seem to invoke a certain nostalgia – memories of a more orderly, rule-based world of financial stability, and close cooperation among nations. Following the two disasters of the Great Depression and World War II that at least was the hope for the new International Monetary Fund, and the related World Bank, the GATT and the OECD.

No one here was actually present at Bretton Woods, but that was the world that I entered as a junior official in the U.S. Treasury more than 50 years ago. Intellectually and operationally, the Bretton Woods ideals absolutely dominated Treasury thinking and policies. The recovery of trade, the opening of financial markets, and the lifting of controls on current accounts led in the 1950’s and 60’s to sustained growth and stability.

The importance, especially from a speaker of Volcker’s stature presenting among the current heads of the two leading Bretton Woods institutions, the IMF’s Christine Lagarde, and the World Bank Group’s Jim Yong Kim, among other luminaries, potentially has radical implications. Volcker provided a quick and precise summary of the monetary and financial anarchy which succeeded his dutiful dismantling of Bretton Woods:

Efforts to reconstruct the Bretton Woods system, either partially at the Smithsonian or more completely in the subsequent negotiations of the Committee of 20, ultimately failed. The practical consequence, and to many the ideological victory, was a regime of floating exchange rates. Somehow, the intellectual and convenient political argument went, differences among national financial and economic policies, shifts in competitiveness and in inflation rates, all could be and would be smoothly accommodated by orderly movements in exchange rates.

How’s that working out for us? Volcker played an instrumental role in dutifully midwifing, as Treasury undersecretary for monetary affairsunder the direction of Treasury Secretary John Connally the “temporary” closing of the gold window announced to the world on August 15, 1971 by President Nixon. Volcker now unequivocally indicts the monetary regime he played a key role in helping to foster.

By now I think we can agree that the absence of an official, rules-based cooperatively managed, monetary system has not been a great success. In fact, international financial crises seem at least as frequent and more destructive in impeding economic stability and growth.
The United States, in particular, had in the 1970’s an unhappy decade of inflation ending in stagflation. The major Latin American debt crisis followed in the 1980’s. There was a serious banking crisis late in that decade, followed by a new Mexican crisis, and then the really big and damaging Asian crisis. Less than a decade later, it was capped by the financial crisis of the 2007-2009 period and the great Recession. Not a pretty picture.

Volcker fully recognizes the difficulties in restoring a rule-based well functioning system both in his speech and in this private comment to Lipsky made thereafter. Lipsky: “It’s easy to say what’s wrong,” Mr. Volcker told me over the weekend, “but sensible reforms are a pretty tough thing.”

The devil, of course, is in the details. What rule should prevail? There is an almost superstitious truculence on the part of world monetary elites to consider the restoration of the gold standard. And yet, the Bank of England published a rigorous and influential study in December 2011, Financial Stability Paper No. 13, Reform of the International Monetary and Financial System. This paper contrasts the empirical track record of the fiduciary dollar standard directed by Secretary Connally and brought into being (and then later administered by) Volcker. It determines that the fiduciary dollar standard has significantly underperformed both the Bretton Woods gold exchange standard and the classical gold standard in every major category.

As summarized by Forbes.com contributor Charles Kadlec, the Bank of England found:

When compared to the Bretton Woods system, in which countries defined their currencies by a fixed rate of exchange to the dollar, and the U.S. in turn defined the dollar as 1/35 th of an ounce of gold:

That said, the Bank of England paper resolves by calling for a rules-based system, without specifying which rule. Volcker himself presents as oddly reticent about considering the restoration of the “golden rule.” Yet, as recently referenced in this column, in his Foreword to Marjorie Deane and Robert Pringle’s The Central Banks (Hamish Hamilton, 1994) he wrote:

There is an active dispute in Washington between Republicans, who predominantly favor a rule-based monetary policy, and Democrats, who predominantly favor a discretion-based monetary policy. The Republicans have not specified the rule they wish to be implemented. The specifics matter.
There is an abundance of purely empirical evidence for the gold standard’s effectiveness in creating a climate of equitable prosperity. The monetary elites still flinch at discussion the gold option. That said, the slow but sure rehabilitation of the legitimacy of the gold standard as a policy option was put into play by one of their own, no less than the then World Bank Group president Robert Zoellick, in an FT op-ed, The G20 must look beyond Bretton Woods. There he observed, in part, that “Although textbooks may view gold as the old money, markets are using gold as an alternative monetary asset today.”
There are many eminent and respectable elite proponents of the gold standard. Foremost among these Reagan Gold Commissioners Lewis E. Lehrman (with whose Institute this writer has a professional association) and Ron Paul, and Forbes Media CEO Steve Forbes, coauthor of a formidable new book, Money, among them. There are many more, too many to list here.
In the penultimate paragraph of his remarks to the Bretton Woods Committee Volcker observes:

Walter Bagehot long ago set out succinctly a lesson from experience: “Money will not manage itself”. He then spoke from the platform of the Economist to the Bank of England. Today it is our mutual interdependence that requires a degree of cooperation and coordination that too often has been lacking on an international scale.

As the great Walter Layton, editor of the Economist, wrote in 1925, “the choice which presents itself is not one between a theoretical standard on the one hand and gold with all its imperfections on the other, but between the gold standard … and no control at all.” “No control at all” anticipates Volcker’s own critique.

If Chairman Volcker overcame his aversion to considering the gold standard as a respectable option for consideration he just might find that his his stated concern “We are long ways from (a new Bretton Woods conference)” may be exaggerated. A golden age of equitable prosperity and financial stability is closer than Mr. Volcker believes.