The French Have a Strange Thirst for Authoritarianism

Rachel Marsden
|
Posted: Nov 08, 2018 12:01 AM
Share   Tweet
The opinions expressed by columnists are their own and do not necessarily represent the views of Townhall.com. 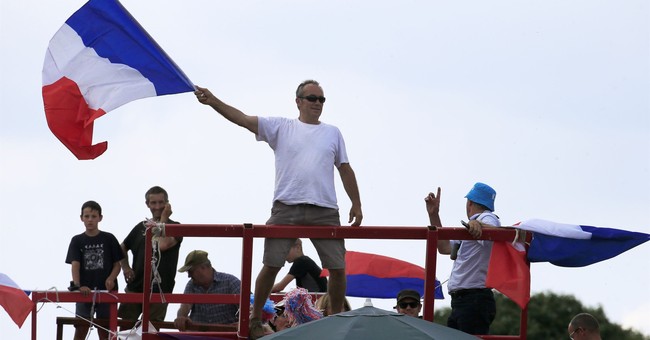 PARIS -- A recent poll shows that 59 percent of French citizens would support an unelected technocratic government, and 41 percent favor an "authoritarian political power."

The results of last month's Ifop poll make it hard to believe that France was a major flashpoint in the global civil rights protests of 1968. The president many French were rebelling against at the time, Charles de Gaulle, is now considered the leader who "best embodies power," according to the same poll. How interesting that the French president most strongly associated with anti-communism and anti-leftism is now considered to have been the country's strongest leader.

France isn't the only place where globalism -- that is, global socialism and the systemic corruption that facilitates it -- is falling apart. Leaders critical of it have been elected in Italy, Brazil, Austria, Hungary, Poland, the United States and elsewhere.

Fifty years ago, the Western world reached a boiling point. Anti-establishment protests swept across the U.S. and Europe, with protesters railing against the conservative post-WWII establishment. Groups with extremist ideologies backed various players on the front lines of these social divisions and used them to push their own agendas. When the dust settled, one form of perceived tyranny had simply been replaced by another. The state had cloaked itself in benevolence to create the illusion of personal freedom. It was all a mirage. Many wouldn't realize it until 50 years later.

Fast-forward to the present day. People around the world are rebelling against a global-governance straitjacket. We didn't even have to be shoved into it. We allowed ourselves to be wrapped up willingly. Why? Because it felt warm and safe. Those who rebelled against this wonderful notion of government spoon-feeding us everything that we need were treated as pariahs and regarded as selfish people who don't care about their fellow man.

Don't want open borders? You're a bigot. Never mind the simple truth that not every low-wage worker in the world can be employed in the West, particularly at a time when robots are increasingly taking over low-paid tasks.

Don't care about girls in Afghanistan who can't go to school because of the Taliban? You're unpatriotic for not wanting your kids to die for a cause in a distant country. Never mind that the biggest beneficiaries are a small handful of crony shareholders who profit from war.

Don't want to invade Iran? You're a terrorist sympathizer. Never mind that you can't list a single thing that Iran has ever done to you personally.

Don't want to see a cage match between Donald Trump and Vladimir Putin? You must be a freedom-hating traitor. Never mind that Putin's economic views these days actually hew pretty closely to Ronald Reagan's in the 1980s, and that Russia has a 13 percent personal income tax rate.

Don't want to empty your wallet to "fight" global warming? You planet-killer! Never mind that the universe is more self-regulating and more powerful than the ego that would conclude it could control Earth's thermostat by tossing a few more bucks at the problem.

Indeed, the grand illusion depends on full compliance in perpetuating these smaller illusions. Practitioners of true freedom who think and act independently represent a threat to the model and will always feel the pressure of government's boot on their neck.

This isn't some kind of great government conspiracy. Only in some cases does the government actually criminalize speech. We've been policing each other. How many times have you been forced to watch your words for fear that you might inadvertently express a thought that doesn't square with that of your social environment?

The systemic tyranny has ramped up to the point that it is now beginning to unravel.

We've come full circle from 50 years ago, when the establishment was deemed too constrictive and replaced not by actual freedom but rather by a con job dressed up in these values. Of course, there's always the danger of history repeating itself, with the anti-globalists and anti-leftists using smokescreens to slip discreetly into corruption themselves.

The only long-term solution is true freedom: from government, from systemic corruption, and even from those who think differently from us. It's only through the ability to exercise true diversity of deeds and thought that we can ever hope to evolve, innovate and better reach out to help others as a result of better helping ourselves.