Rachel Marsden
|
Posted: Dec 27, 2017 12:01 AM
Share   Tweet
The opinions expressed by columnists are their own and do not necessarily represent the views of Townhall.com. 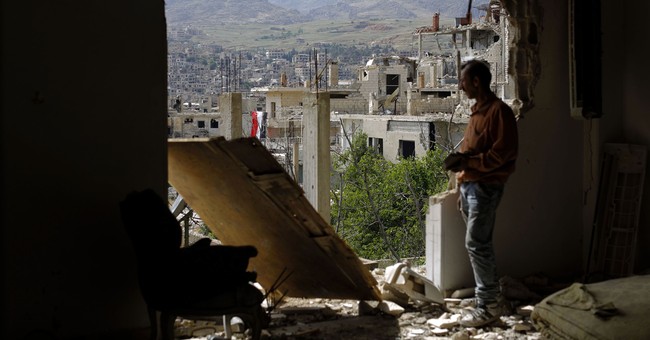 If 2017 world politics was a car trip, then it consisted primarily of off-roading. In 2018, we're going to find out if some of those abrupt departures from familiar, well-trodden pathways were worth the risk.

Here are five adventures that began this year, and the kind of scenery that we might be able to expect as we look out the window over the next year.

-- The Syrian-based war against the Islamic State wrapped up in 2017, with Russia and Iran emerging as the real victors due to their key role in defeating the global terrorist brand while maintaining Syrian President Bashar al-Assad's hold on power. If the Syrian Civil War, which began in 2011, was a Western plan to contain the Iranian-led Shiite axis and promote Israeli and Saudi political and economic dominance in the region, then that operation was a failure.

Now, watch for the proxy war in Yemen between the same sides (the Saudis and their Western-supplied weapons vs. Iran and its Houthi proxies) to heat up. The "global war on terrorism" has become a pretext for a traveling road show.

-- With disenchanted Western-bred jihadists waltzing back into Western countries after spending a few years abroad honing their propaganda-creating and head-chopping skills, expect the issues of immigration and national security to remain on the front burner, particularly as these people settle back into civilian life and get reacquainted with rental vehicles, which will continue to be mysteriously attracted to populated sidewalks.

-- The new Cold War that much of the Western establishment is trying to reboot will likely play out on the Russian-Ukrainian border. Both Canada and the U.S. have authorized the shipment of lethal weapons to Ukraine, where they could conceivably fall into the hands of anyone who happens to be juggling some free time and untraceable bitcoin. But, hey, it's all in the name of NATO countries trolling and harassing Russia on its own border, even though Ukraine isn't even a NATO country.

-- Saudi Crown Prince Mohammed bin Salman went all out this year to show the world that he's serious about fighting corruption, albeit mostly among potential challengers to his authority. Who needs due process when you have carte blanche and gut instincts? You can just call them all to a meeting at the local Ritz Carlton and effectively imprison them there while you give softball interviews to friendly media, who turn a blind eye to your sponsorship of terrorism simply because you decided to let women drive.

Watch for the "anti-corruption" sweep to take a back seat to something a little more recognizable from the Saudis this year -- most likely another beef with Iran, with considerable collateral damage involving third parties.

-- Perhaps the most significant hallmark of 2017 was the election of bulldozers in suits, namely U.S. President Donald Trump and French President Emmanuel Macron. While Trump let it all hang out well before he was elected, Macron has increasingly Trumpfied in public since he was elected in May, lighting fires under French behinds by unshackling the economy with a flurry of executive orders, all while emphasizing personal responsibility and personal initiative to those who have traditionally preferred to wait around for the state to solve their problems.

Macron went to Africa in November and did the same in front of a group of university students in a raucous debate. As they evoked French colonialism, Macron said that he didn't want to be in charge of the electricity at a university in Burkina Faso -- that it was up to that nation's president to fix the air conditioning (which apparently wasn't working that day). It's hard to remember the last time a French president had the guts to engage in such verbal combat.

The palpable anti-establishment streak in each of these leaders may knock a few more of their counterparts off the mindless globalist automaton bandwagon. One major globalist figure to be mugged by a new reality in 2017 was longtime German Chancellor Angela Merkel, now forced to form a coalition government after a drubbing at the polls owed primarily to her come-one, come-all immigration policy. While strong leaders such as Trump and Macron won't agree on everything, it's enough that they exist independently, much like a few smaller vortices can form a tornado.

The year 2017 was one of transition from the status quo into unchartered territory. The year 2018 will reveal whether these adventures were merely flirtations or full-blown love affairs with a new reality.