Afghanistan Surge Is About Regime Change in Iran

Rachel Marsden
|
Posted: Aug 23, 2017 12:01 AM
Share   Tweet
The opinions expressed by columnists are their own and do not necessarily represent the views of Townhall.com. 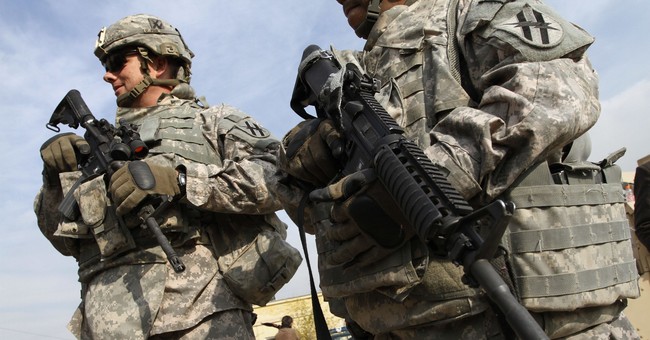 The Islamic State has taken another hostage -- and he was reading to America from a teleprompter in an expensive suit and blue tie Monday evening at the Joint Base Myer-Henderson Hall near Arlington National Cemetery. Apparently there are some things that simply are more powerful than the president of the United States -- namely, the military-industrial complex, the original sponsor of the Islamic State and now the sponsor of U.S. President Donald Trump's planned troop surge in Afghanistan.

"We are not nation-building again," Trump proclaimed near the end of his Monday-night address. "We are killing terrorists."

Back in 2001, I might have believed that. Actually, I did believe it when the U.S. launched a war against the Afghanistan-ruling Taliban in the wake of the September 11 terrorist attacks.

But that was 16 years ago. Trump had the right idea when he tweeted on January 11, 2013: "Let's get out of Afghanistan. Our troops are being killed by the Afghanis we train and we waste billions there. Nonsense! Rebuild the USA."

While indeed there are still jihadists in Afghanistan, that's hardly shocking -- no more shocking than the fact that wildebeests and lions roam the Serengeti. There are terrorists in Europe, too, and they're mowing down citizens with cars on a regular basis. Terrorists are everywhere these days. We have to ask ourselves whether the 16-year fight against terrorism has made America and its allies any safer.

Afghanistan is back to square one, with the Taliban increasingly running the country, backed by its traditional sponsors: Saudi Arabia and Pakistan. Most of the terrorists who attacked America on September 11, 2001, were from Saudi Arabia. And Pakistan was where the mastermind of the attacks, Osama bin Laden, found safe haven until he was killed by U.S. Navy SEALs.

The Taliban's military activities are also funded by the black market opium trade. Russia bailed on counterterrorism cooperation with the NATO alliance in Afghanistan because of frustration over the lack of interest in cutting this source of revenue, which grew by 43 percent last year, according to United Nations officials.

If you're not going to touch the opium trafficking, and you're not going to penalize Saudi Arabia for sponsoring jihadism and interfering with its neighbors, then you're wasting your time sending soldiers back into that bottomless black hole of conflict.

By sending more troops to Afghanistan, the U.S. is actually worsening the national-security interests of the Western world, just as it did with attempts at regime change in Syria and Libya, where both conflicts caused jihadist blowback in Europe. As the noose tightens in the Middle East, terror attacks have ramped up. And such attacks have become easier to pull off as European borders have opened in the interests of humanitarianism, exposing a lethal loophole in Western benevolence.

Make no mistake: This is still all about regime change for the military-industrial complex, particularly as hopes of overthrowing the Syrian government dissipate. What do Syria and Afghanistan have in common? Proximity to Iran. This is hardly a coincidence.

Trump's secretary of defense, General James Mattis, has done little to hide his animosity toward the Iranian regime, telling a high school journalist in a June interview that "[Iran] is the only reason Assad has been able to stay in power." Mattis added: "Iran is certainly the most destabilizing influence in the Middle East, and when I would travel to Cairo or Tel Aviv or Riyadh ... from Arabs from Jews, all the people in the region, that is their view of Iran."

What Mattis failed to mention is that nearly all those entities are on the same side, along with the U.S. military-industrial complex. Russia and Iran are on the other side -- the one that's constantly treated like an enemy for having competing economic interests.

In Monday's speech, Trump admonished Pakistan but not Saudi Arabia. "We can no longer be silent about Pakistan's safe havens for terrorist organizations, the Taliban and other groups that pose a threat to the region and beyond."

Why not just cut off the head of the snake? What will it take for this administration to sanction and condemn Saudi Arabia?

Notably, Trump didn't mention Iran. Heaven forbid that anyone put two and two together and figure out the real reason behind this new incursion: regime change in Tehran.

Can we please just take a break from failed regime changes already? If this is all really about long-term foreign economic interests -- and it always is -- there are far more intelligent ways to achieve success. International businessman Trump should know that bombing the competition isn't exactly the best foundation for a long-term business strategy.