Russia and America Should Unite against Saudi-China Alliance

Rachel Marsden
|
Posted: Apr 13, 2016 12:01 AM
Share   Tweet
The opinions expressed by columnists are their own and do not necessarily represent the views of Townhall.com. 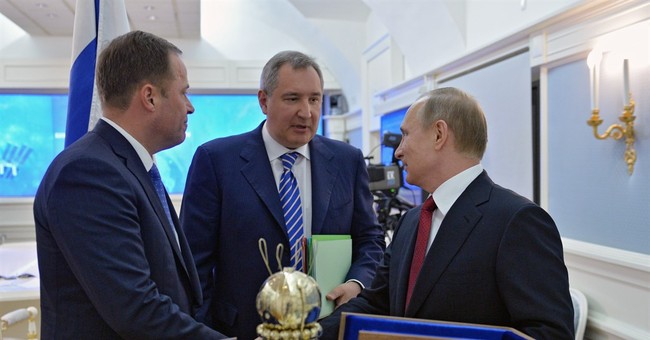 If the Central Intelligence Agency's role is to discreetly promote the economic and political interests of the United States, then there's one country that ought to be awfully disappointing to the agency right now: Saudi Arabia. In fact, if there's an issue on which America and Russia could potentially agree, it would be the damage Saudi Arabia has recently wrought upon the national and economic security of both nations.

Take Syria, for example. The CIA operation to train Syrian rebels goes by the code name "Timber Sycamore," according to the New York Times. As it turns out, if a Timber Sycamore falls covertly on the president of Syria and no one is supposed to see it, the resulting jihadists still make a sound.

It was supposed to be easy: Let the Saudis arm and fund some independent contractors to take down Syrian President Bashar al-Assad. The CIA covers the training. Assad is driven out. A leader who's friendlier to U.S., Saudi and Qatari interests moves in. Russia loses its footing in the region.

Except it didn't work out that way. Instead, Russia had to swoop in and clean up the mess. This gives Russia more influence in the region and grants it significant moral authority in helping to determine future Syrian leadership at the diplomatic bargaining table.

"We believe that the Russian interference in Syria is very dangerous because it exacerbates the conflict," said Saudi Foreign Minister Adel al-Jubeir

Actually, Saudi funding exacerbated the conflict. One could argue that without it, the Islamic State would have sputtered out at the incubation phase.

You know what else exacerbates the conflict? The fact that Saudi Arabian leadership hasn't been nearly as generous as, say, German Chancellor Angela Merkel in absorbing massive numbers of refugees from the conflict.

Meanwhile, Russia has long been angered by Saudi funding of Chechen terrorists in Russia's North Caucasus. A few months before the 2014 announcement of Chechen terrorist leader Doku Umarov's death in late 2013, a Russian intelligence source confirmed that Umarov had been captured by Russian special forces and was writing out a confession in which he had implicated "certain Persian Gulf nations" in the funding of his terrorist activities. (And of course, let's just ignore the fact that 15 of the 19 terrorists who attacked the U.S. on September 11, 2001, were Saudis.)

The continued butting of heads between Russia and the U.S. over Saudi Arabia stems from the fact that at the height of the Cold War, during the Ronald Reagan administration, the U.S. viewed the Saudis as a means of containing the Soviet threat. Reagan convinced the Saudis to flood the oil market, collapsing the value of Russia's oil exports. At the time, the Soviet Union had no rainy-day sovereign funds from which to draw in case of a crash in oil prices.

The Saudis are now flooding the oil market again. But this time, both Russia and America are suffering as a result, with Russian oil exports and the U.S. shale oil industry taking a hit.

And who's playing the role of Reagan now, convincing the Saudis to boost oil production? China.

Saudi Arabia is enjoying a series of new Chinese investment deals -- including a $2.5 billion deal to host a nuclear facility -- and has moved past Russia to become China's largest oil supplier. Meanwhile, the resulting crash in oil prices is taking a toll on the U.S. and Russia. There have been significant job losses in America's oil and gas sector, and Russia has had to smash the glass on its reserve funds in order to diversify its economy.

This sort of scenario was envisioned in a now-declassified CIA report from January 1999 that emphasized China's interest in Middle Eastern oil and the resulting development of ties that "could create bilateral tensions" and "increasingly challenge U.S. policy in regions in turmoil, such as the Middle East."

The Saudi-China alliance has the potential to undercut Russian and American interests. Saudi Arabia effectively leads OPEC, and its lucrative business dealings with China eliminate the incentive to increase oil prices.

Since China doesn't like to be seen overtly interfering in the domestic affairs of other nations, it's unlikely that the Chinese will be using their newfound leverage to rein in the Saudi terrorist-enabling shenanigans that we've seen with the rise of the Islamic State. But what if China, like the U.S., eventually decides to use Saudi Arabia as a Middle Eastern proxy to serve Chinese interests in the region?