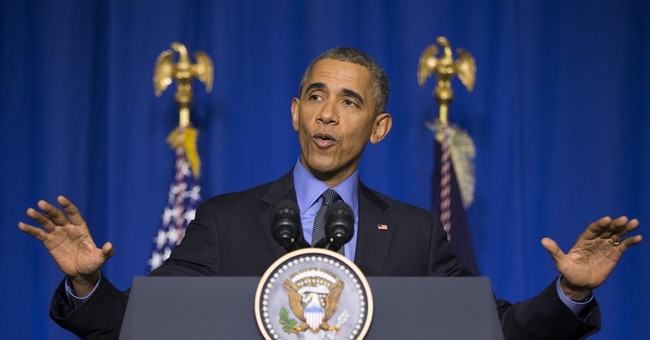 "We salute the people of Paris for insisting this crucial conference go on -- an act of defiance that proves nothing will deter us from building the future we want for our children," Obama said. "What greater rejection of those who would tear down our world than marshaling our best efforts to save it?"

French President Francois Hollande proclaimed, "I can't separate the fight with terrorism from the fight against global warming."

Allow me to assist: Terrorists killed scores of your country's citizens two weeks ago; the weather did not.

Since terrorism is an actual problem, there's been an ongoing attempt to fabricate a connection between terrorism and climate change. A report issued by the U.S. Department of Defense last year speculated that climate change could lead to government instability, which could lead to more terrorism. "These gaps in governance can create an avenue for extremist ideologies and conditions that foster terrorism," the report said.

Actually, the greater risk to government instability is trying to destabilize and oust governments by arming locals who turn out to be terrorists -- as we have seen in Syria with the "Syrian rebels" who eventually morphed into the Islamic State. As for other problems that could make governments unstable, there's plenty of development aid being earmarked for that already. There's no need to create some shady carbon market on the side.

I guess addressing exaggerated problems with no measurement for accountability is more pleasant than having to wrestle with tangible threats. As we've seen, terrorism actually kills people. Any perceived threat that climate change poses to humans is based on a tenuous link between a minuscule change in the earth's temperature and the sort of severe weather episodes that mankind has been dealing with for centuries.

Still recovering from the trauma of the November 13 terror attacks, shell-shocked Parisians now have to contend with the display of more than 150 world leaders flagrantly avoiding the responsibility of real problems. The leaders' sole focus: trying to reach an agreement that they believe will keep any planetary average temperature increase within 2 degrees Celsius of pre-industrial levels.

Are they sure they're ready for such a deal? Are they really prepared to graduate from talking about unaccountability to acting unaccountably? Better be certain.

Before anyone at COP21 signs an agreement, I'd like to personally invite each of the 150 global leaders to my Parisian home to see if they can keep the temperature of a single room within 2 degrees Celsius of a given target, let alone the entire planet.

Since all of these world leaders are gathered in one place, it would be nice to hear their plans for contending with actual crises, like a terrorist bomb taking down a Russian passenger jet, unmanageable domestic terror threats, and migrants from terror-ridden nations crashing Europe's borders. Perhaps the West and Russia could present a plan for effectively fighting the Islamic State without shooting down each other's jets.

Let's call this climate change conference what it really is: a scam to transfer billions of dollars in taxpayer funds from developed nations to "emerging markets." During Monday's opening session, Prime Minister Narendra Modi of India said that without $100 billion from developed countries by 2020, developing countries such as India couldn't possibly hope to reduce their own greenhouse gases. "Developed countries must fulfill their responsibility to make clean energy affordable and accessible to all in the developing world," Modi said.

That's like saying, "I demand that you buy me a mansion. Otherwise, some nice houses will keep getting robbed."

No one is against a clean environment. We all have to drink water and breathe air. And all but the biggest jerk will rescue a protruding soda bottle from the trash and throw it into a recycling bin. But we're not talking about that here. Air and water pollution can be measured, and those responsible for causing it can be held accountable. The true outrage of the climate-change scam is that developed nations have made the greatest efforts to mitigate pollution through innovation, yet they're still expected to assist in their own extortion by nations that have done far less and have yet to prove they'll ever do more.

If there's any real threat in climate change, it's that this blatant extortion has become so acceptable and institutionalized that the governments of developed nations are openly complicit in the financial victimization of their own citizens.

Rep. Cawthorn Says Fauci Should Be Prosecuted if Republicans Win the House in 2022
Landon Mion
D.C. Police Chief: Marijuana 'Undoubtedly is Connected to Violent Crimes'
Landon Mion
Florida Dems Slammed For 'Flat Footed' Response to Pro-Freedom Protests in Cuba
Reagan McCarthy
NY Post Op-Ed Zeroes In on What the CDC Is Missing When It Comes to Kids and Forcing Them to Mask Up
Matt Vespa
Did a Co-Host for The View Realize She Blew Up the Liberal Narrative on ID Mandates This Week?
Matt Vespa
DC Police Chief Incensed After Another Shooting In Broad Daylight: You Cannot Coddle Violent Criminals!
Julio Rosas