Paris Terror Should Be the Final Wake-up Call 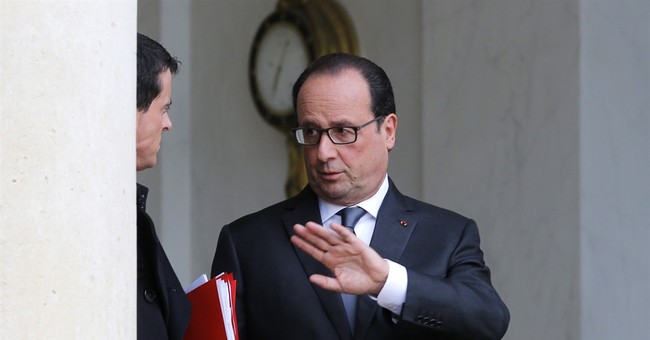 PARIS -- I'm getting tired of living in a guerrilla terrorist war zone and having friends ask me if I'm all right. If you think that I'm exaggerating in describing Paris as such, consider the 129 civilians killed (at last count) and 352 injured here in coordinated Islamic State-inspired terrorist attacks -- mass shootings, suicide bombings and hostage taking -- last Friday night while attending a concert, having dinner at a cafe or otherwise spending a night out in the city. It's the very definition of asymmetric warfare.

In the aftermath, stores and movie theaters were closed, travelers faced long delays at airport customs, and the streets were much quieter than usual, except for at a vigil at the Place de la Republique, where people nearly trampled each other after some jerk set off firecrackers and caused a panic.

Oh, but all this inconvenience is such a small price to pay for freedom, right? Wrong. Maybe this sort of thing is routine in Damascus or Baghdad, but it's an unacceptable standard in a G-7 country.

It's not the first time that France has come under attack this year. There was the massacre perpetrated by jihadists at the Paris headquarters of the Charlie Hebdo satirical newspaper in January. In June, an assailant with Islamic State ties decapitated his boss and then tried to cause an explosion at a chemical plant. Then, in August, passengers were able to thwart an attempted massacre by an Islamic extremist on a Thalys high-speed train.

The backgrounds of the six Paris attackers who have been identified so far illustrate booth fronts of the threat. Five of them were French nationals (some with Belgian jihadist connections). One was a Syrian who reportedly exploited the recent migrant wave to get into the country.

The open borders of Europe sure do close in a hurry after a large-scale massacre. French President Francois Hollande reimposed France's border controls in the wake of the attacks and called for tighter border controls across Europe.

It took Hollande long enough. The war against terrorism is an intelligence war. Intelligence is the only way to stay ahead of the threat while balancing security with the civil rights. According to former French President Nicolas Sarkozy, the French intelligence services are monitoring about 11,000 "Fiche S," or "S file," individuals, defined as "persons being investigated to prevent serious threats to public safety or security of the state, since information or solid evidence has been collected on them." French intelligence had opened S files on many of the individuals involved in the terrorist attacks that have taken place this year.

Knowing that French intelligence services are already overwhelmed, why make it easy for even more potential S file cases to enter the country? Saudi Arabia and other Persian Gulf countries have declined to accept Syrian migrants, refusing to sacrifice domestic security in the name of humanitarianism. So why is Europe always so eager to fall on its sword?

The obvious starting point is for France to require immigrants to undergo background checks BEFORE they arrive on French soil. This should have been the case before the start of the migrant wave.

Until now, French politicians had been afraid to address the lurking terrorist threat for fear of being accused of overreacting. It's as if the prevention of murderous rampages was somehow an extremist position. Did politicians believe the jihadists would be touched and positively swayed by the government's sense of reserve?

Why are S file individuals subjected only to haphazard monitoring when they have been identified as threats to national security? In the wake of the Paris attacks, Sarkozy, who now leads France's opposition party, wants S file individuals to be placed under house arrest or monitored with electronic bracelets. Why is there not yet a mechanism compatible with French law to expel or incarcerate these people? In the meantime, Sarkozy's idea is better than letting ticking time bombs roam around unfettered.

Meanwhile, Hollande is talking about changing the constitution so that dual nationals can be stripped of French citizenship if they're convicted of terrorism, even if they were born in France. But by the time anyone is convicted of terrorism, they've usually stripped others of life. Hollande also wants to prevent dual nationals who are deemed to be a security risk from entering the country -- which is a no-brainer and should have long ago been the case.

So here we go yet again -- another opportunity for the French government to take action to protect its citizens in the wake of a terrorist attack. Try not sidestepping effectiveness for lack of political courage this time.