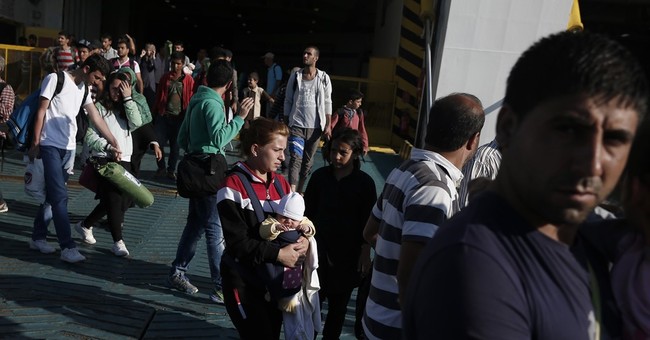 As tens of thousands of migrants flood into Europe from Syria -- primarily as a result of poorly considered Western military intervention and the subsequent rise of the Islamic State -- hearts are growing so large that they risk displacing brains.

Emotional blackmail doesn't lead to sound policy. There's always a temptation to resolve sensitive situations by demanding a political solution to something that would be best solved through critical thought and debate. We saw how well the rush to smash the glass and grab the fire extinguisher worked with the 2008 global financial crisis.

International guidelines adopted domestically due to intense political pressure have resulted in misguided, two-bit measures such as the Dodd-Frank Wall Street Reform and Consumer Protection Act, a political security blanket that will be powerless to prevent another financial crisis and has created unforeseen tangential problems.

There's now similar global pressure to mitigate the wave of humanity crashing into Europe. There is an acute rush to virtue to see which developed nation can welcome the most migrants.

The easiest way to resolve the situation would be to stabilize Syria so that would-be migrants can stay put. But the U.S.-led coalition isn't close to getting a grip on the situation, and U.S. Secretary of State John Kerry has reportedly bristled over speculation that Russia might become militarily involved in Syria. That speculation was fueled by Russian President Vladimir Putin's recent comments about the Syrian situation.

"So far, (American) efficiency has not been very high," Putin said, "but it is too early to say that we are ready to (intervene). However, we are providing Syria with significant support anyway, both in equipment and personnel training, and armaments."

Why not give the Russians a shot? They could hardly do worse.

Excusez-moi, but as someone who lives in Paris, I'm wondering where, exactly, Monsieur le President thinks all those refugees will go while French security services are executing proper due diligence to ensure that the newcomers aren't a security threat. Can we get more information on that, s'il vous plait?

It's a legitimate concern, given that the perpetrators of recent terrorist attacks, or attempted attacks, in France had ties to the Middle East. Are the Syrian refugees just going to be flown into Paris, issued temporary visas while their cases are being adjudicated, and allowed to disappear into the ether of French society? I say "non" to that idea -- but perhaps I can offer a suggestion.

There are so many overseas French territories and departments that are world-renowned island vacation destinations, such as Reunion Island, French Polynesia, Guadeloupe, Martinique, Mayotte and New Caledonia. Hollande should charter some planes and send these prospective French citizens for an extended stay in those isolated paradises while they're being vetted.

A nation's security services shouldn't be pressured to act hastily in performing due diligence on thousands of Syrian migrants. There is no doubt that these services are equipped to do the job reliably, if given a reasonable length of time.

France's intelligence service quietly has been consulting with a representative of Syrian President Bashar al-Assad's regime since 2013 to obtain information about French combatants in Syria. In fact, France has a long history of discreetly taking "nuanced" foreign-policy positions, including the use of shadow emissaries to provide information critical to national interests. Not to mention that the French foreign intelligence service, the DGSE, has long been doing its own thing, gathering intelligence in and around Syria.

In other words, France has the information to make sound decisions about each refugee applying for citizenship, and it typically ends up granting citizenship to only about 20 percent to 25 percent of refugee applicants. It should continue to do so, and other nations would do well to follow suit.

It would be a mistake for Western countries to welcome a tsunami of migrants unconditionally, without taking precautions to ensure that compassion doesn't come at the expense of national security.