Cheap Oil Could Be A Trojan Horse For America 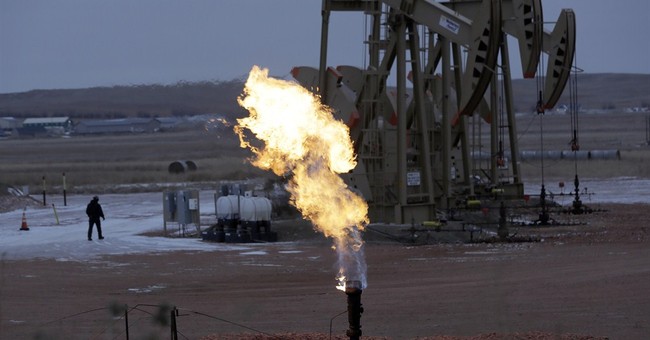 "Subversion introduced from the outside." That's part of Encyclopedia Britannica's definition for a Trojan horse, the hollow structure that allowed Greek soldiers to penetrate the city of Troy and win the Trojan War. What if the drop in oil prices currently making everyone cheer at the pumps is exactly that -- a Trojan horse?

Subversion theory dictates that in order for an offensive move to be effective, it has to be welcomed. And who in America isn't psyched about cheap gas right now? Meanwhile, the U.S. government likely feels differently. It was set to reap profits from its shale boom -- that is, before Saudi-led OPEC decided to flood the market with massive supply.

To whose ultimate benefit is the price drop? On the face of it, the only real benefactors appear to be global consumers. So then why bother flooding the market? Despite the Saudi oil minister suggesting that his country wouldn't mind watching oil prices take an even greater plunge, Saudi Arabia is still taking an income cut on its primary source of revenue at a time when it's projecting a $39 billion deficit for 2015. Why are the Saudis pretending that a kick in the rear is a gluteal massage?

Saudi interest in the petroleum high-dive games could be strictly political, as Saudi Arabia has a long history of "political funding." For example, we've already seen the Saudis supply the "Syrian rebels" with resources in their failed regime-change efforts against Syrian President Bashar al-Assad, ultimately leading to the rise of the Islamic State terrorists currently wreaking havoc in Iraq and Syria.

One theory is that Saudi Arabia and the U.S. are conspiring to weaken the economies of Russia and Iran. The motives would make enough sense. With respect to Iran, Saudi Sunni and Iranian Shiite regimes have long hated each other, while America is perpetually concerned about Iranian nuclear unpredictability. On the Russian front, Saudis and Russians have been at each other's throats over Saudi funding of Islamic terrorism in Russia's North Caucasus region and over Russia's defense of Assad in the interests of maintaining Russian oil interests and of curtailing Islamic terrorism. Meanwhile, the U.S. currently seems intent on squeezing Russia economically.

But as much sense as a U.S.-Saudi Arabia conspiracy theory might make, there are some significant problems with it. The U.S. chose Russia as a partner over Saudi Arabia and Qatar when faced with that choice in Syria last year. There are no shared ideological interests between the U.S. and Saudi Arabia -- aside from mutual cooperation in combating the Islamic State, which both countries had a role in creating. The Saudis couldn't possibly manage to weaken the Russian economy to the point that Putin would abandon Assad and bail on Russia's associated economic interests in the region -- nor would America want that at a time when Assad's forces are now fighting against a common Islamic State enemy. Moreover, Russian and Saudi ministers met in Moscow in November to discuss cooperating on oil to better manage their respective economic interests. That last fact alone flies in the face of any Saudi-U.S oil price conspiracy theory.

An arguably more plausible theory is that if any nation is colluding with Saudi Arabia, it's China, the top global net importer of petroleum products and the country that's most benefiting from the bargain prices at the pump these days. China is also the only player that couldn't care less about oil revenues. Sitting in 49th place in the world for crude exports, China relies on manufacturing for its revenues. Unlike everyone else in this game, when China lays an oil pipeline in a foreign country, it's not for profit -- it's just a massive straw delivering the milkshake to the insatiable masses back home.

During the China-Arab Cooperation Forum in Beijing over the summer, Chinese Foreign Minister Wang Yi wrote that, "China and Arab states are working together to build the economic belt and the maritime silk road to revive the modern-day silk road. This will open a door to new opportunities for China-Arab relations."

Saudi Arabia is already China's top oil supplier, and China doesn't care about its partners' ideological preferences. It's a match made in heaven.

If the Saudis and Chinese are wheeling and dealing on oil prices for rewards to be specified later, then Russia, North America and Europe will eventually all end up sobbing into their alcoholic beverages of preference as their liquid gold drops in value.

And while we consumers may enjoy the price break now, government and industry oil-revenue loss will come back to bite us in the form of job losses and fiscal cutbacks -- requiring even more U.S. debt to be bought up by its primary holder: China.

Enjoy the cheap gas, but let's just hope that it doesn't end up costing us far more than we could ever have imagined.