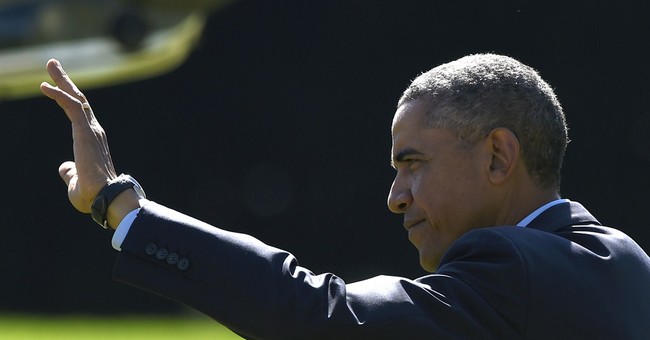 Trending
There are at least two things that the public expects the government to get right, even when it fails at nearly everything else: public safety and national security. The Obama administration has a responsibility to protect its citizens. There is no excuse for the failures we're witnessing -- from the containment and eradication of Ebola to the containment and eradication of its ideological equivalent: radical Islamic extremism.

As a free-market and limited-government proponent, I don't find the government useful for very much, quite frankly. But I concede that there are instances where it's inefficient or nonsensical for individuals to organize themselves. No one wants their neighbor running his own personal spy agency, for example. No one would trust a coalition of civic-minded citizens to eradicate terrorism in the Middle East. And it wouldn't be good to have people independently experimenting on deadly viruses in their basement alongside their model car projects. For these things, government initiatives with political oversight are much preferred.

Except that petty politics are crushing the effectiveness of such initiatives. The major players on both sides of the aisle are so clearly preoccupied with image and how their actions are perceived politically that it's impeding pragmatic action.

By looking closely enough, Americans can see this phenomenon in their day-to-day lives, in things like prepackaged food products. Some of the garbage ingredients that the U.S. government allows in food are banned by French regulators, for example. This isn't "big government" intrusion -- it's not like consumers have the time or expertise to police the ingredients of every item on the grocery store shelf. The government could actually play a useful role here. Except that it doesn't because, ultimately, lobbyists make a big political stink about it and everyone stands down.
CARTOONS | AF Branco
View Cartoon

In the case of the Islamic State, also known as ISIS, taking over Iraq and Syria, Obama and his golf caddie apparently insisted on spurning every possible avenue of preemption and potential for early victory, preferring instead to measure the potential impact of every possible political wind vector against his moistened index finger.

Even now that the commander in chief has committed to "leading" (I use that term loosely here) allies back into battle against the forces of Islamic extremism in the Middle East, one of the big questions among those allies has become: "So who's in charge of this fiasco?" The so-called "moderate rebels" of the Free Syrian Army wonder why their allies are now suddenly incommunicado to the point of dropping bombs awfully close to them (presumably inadvertently). Meanwhile, Georgia, Slovenia and Turkey publicly dispute the Obama administration's characterization of their involvement.

The fog of war is so dense that sectarian fighting among local factions is thriving under the cover of the big tent of coordinated allied efforts against ISIS.

It would be different if you could make the case that the end will justify the means, but there's little evidence to suggest that will be the case. Iraq disintegrated back into chaos against America's expectations, as did Libya. Speaking of which, the situation in Libya is so bad that U.S. Secretary of State John Kerry is in Paris this week to discuss it with his Libyan counterpart.

The end was also supposed to justify the means with respect to actions in Ukraine. Except that Kerry is also meeting in Paris with a representative from the other side of that conflict: Russian Foreign Minister Sergei Lavrov, who's fresh off speaking to the Association of European Businesses -- an entity that the Western-backed coup d'etat in Kiev was ultimately supposed to place at odds with Russia. Instead, Lavrov blew off Western sanctions, generally embraced trade diversification as a pragmatic reality, and called for Russian-EU free trade.

Such policy failures occur because the actions of our leaders were politically motivated and lacking in long-term strategic vision. It's a result of how Washington operates: in four-year cycles that mark the time between presidential elections.

Which brings us to the most recent politically mishandled fiasco: Ebola. The outbreak is centered in West Africa. The solution is simple: Ban flights from West Africa to North America until the outbreak is fully contained, and ramp up border vigilance. It's not exactly rocket science. What you don't do is shrug and lay out plans for "Ebola hospitals" for the potential onslaught of a virulent disease that you're choosing to facilitate by taking a political stand rather than a pragmatic one.

As if to drive home the point, at a time when the U.S. military is neck-deep in wrangling both Ebola and ISIS, Defense Secretary Chuck Hagel just unveiled the Defense Department's plan for how the U.S. military will address climate change, which Hagel described as a national security threat.

If only the threats that America faces could fatally succumb to such political buffoonery.