Humanitarianism in the Form of Airstrikes 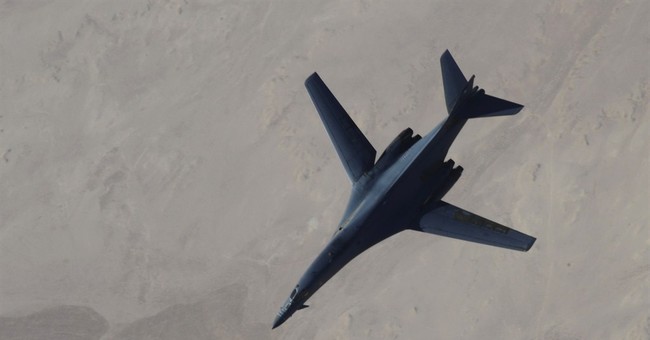 When the bad guys start rolling out videos featuring beheadings and mass slaughter, it tends to resolve any cognitive dissonance for all but the most obtuse, and it assists in framing any military response as a humanitarian mission by default.

Such was the case in NATO's 2011 Libyan intervention, which enjoyed 70 percent Canadian approval and an even higher degree of support in France, where French President Nicolas Sarkozy successfully framed it as a fight against the oppression of innocents by ruler Moammar Gadhafi's henchmen.

It's the 36 percent of Canadians opposed to airstrikes that should evoke greater curiosity.

Obviously, there are always going to be people who will oppose war in every possible context. Bombs could be falling all around them, and they'd still sit there pontificating about war being an inappropriate response to barbarism. However, it's highly doubtful that more than one-third of Canadians fall into this category.

Part of that 36 percent could very well be in favor of what Liberal Party leader Justin Trudeau has suggested as an alternative to airstrikes: humanitarian action. OK, Canadians, anyone who'd like to volunteer for humanitarian duty in territory controlled by the Islamic State, please raise your hands. Anyone? Islamic State guerrillas are slaughtering anyone they come across and just beheaded a British humanitarian aid worker on video. Good luck finding any volunteers for humanitarian missions who aren't either hopelessly naive or just plain suicidal.
CARTOONS | AF Branco
View Cartoon

There's nothing wrong with "humanitarian missions," as long as that's a euphemism for a mission involving a lot of weapons and people trained to use them.

"Why aren't we talking more about the kind of humanitarian aid that Canada can and must be engaged in, rather than, you know, trying to whip out our CF-18s and show them how big they are?" Trudeau said of Canadian Prime Minister Stephen Harper's airstrike proposition.

Trudeau is not entirely incorrect in his implication that the drumbeating isn't exactly productive. As the famous military strategist Sun Tzu said in "The Art of War": "Let your plans be dark and impenetrable as night, and when you move, fall like a thunderbolt."

Announcing strategy and intent in advance of any action only benefits the enemy -- particularly in guerrilla and asymmetric warfare. By contrast, with conventional nation-state warfare, the announcement of military intentions can serve as an extension of diplomacy right up until the first strikes. But it doesn't work when political engagement is futile, as is the case with unaccountable Islamic State terrorist combatants hell-bent on conquest and territorial expansion in the interest of ideology. It only gives them a heads-up.

The Islamic State has already been able to elude some U.S. airstrikes because U.S. President Barack Obama announced that they were coming -- much like the announced withdrawal date of troops from Iraq played a role in the initial rise of the Islamic State. A suicide bombing earlier this week in Chechnya killed five people and injured 12 in the immediate wake of Kremlin-backed Chechen President Ramzan Kadyrov mouthing off about intentions to kill terrorists.

"In the war against terrorism, big mouths don't have any place," a Russian intelligence source told me. "The [intelligence] services work and strike in the shadows. Have you heard [Russian Federal Security Service Director Alexander] Bortnikov say, 'We're going to kill you all'? No. He does his job with efficiency and discretion."

So one can only hope that Trudeau was referring to humanitarian aid strictly as cover for covert military action, or a targeting operation to assist in better blowing up Islamic State fighter nests. In other words: "Canadian Special Forces grocery delivery service here! To what address should we send the bombs ... er, I mean, care packages?" Because right now, the need to eliminate beheadings trumps Pop-Tart distribution.