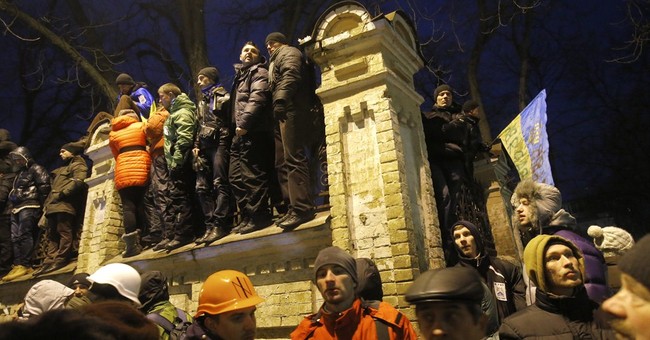 Tens of thousands of protesters are flooding the streets of Ukraine, blocking access to government offices and threatening to start what the media is largely (and preemptively, if not mistakenly) referring to as a "revolution." All this over the pro-Russian Ukraine leadership's decision to renounce a free-trade agreement with Europe that would have represented a shift away from the Russian sphere of influence.

Except that this is no revolution, at least not yet, and people around the world seem to have forgotten what that word actually means. Like so much else these days, it seems that the very meaning of the word has become so diluted as to be virtually meaningless.

If you're a self-styled revolutionary, please study the poster boy for such things: Che Guevara. I don't much care for Che or his ideology, but he wasn't in his basement making protest posters and figuring out how he was going to get pizza delivered while he spent days camping out on Wall Street with his pals.

Today's protesters, wherever they happen to be in the world, seem to think that they can execute Che-like coups on superpower-backed governments with the same effort it takes to click a "like" button on a Facebook page that translates as "EuroMaidan" -- a hat tip to the Maidan Nezalezhnosti central square in Kiev -- as more than 126,000 people have done to date. That won't even score you a victory in a government no-confidence vote, as we're seeing in Ukraine.

Governments, particularly those with support from superpowers, can't be ousted unless the opposition has two things working its favor: support from the state military (or at least a large faction of it), and an expanded Overton window, defined as the range of ideas and outcomes deemed acceptable by the public.

The Ukraine protesters seem to be looking for a peaceful Berlin Wall dismantling kind of moment -- minus the fall of the Soviet empire that provided the impetus for that historic opportunity. Popular, or "color," revolutions against governments don't work unless they're backed by superpowers -- and typically not without an electoral event that would provide adequate opportunity and democratically acceptable cover for government removal.

The widely accepted blueprint for color revolutions is Yugoslavia's "Bulldozer Revolution," which overthrew Slobodan Milosevic in 2000. The planning and strategy for that revolution was tethered to an election cycle, as was Ukraine's 2004 "Orange Revolution." But now the country doesn't have presidential elections scheduled until 2015. Nor is there any galvanizing opposition leader (at least not one who isn't currently in prison), or any obvious Ukrainian military support for a coup d'état.

Ukrainians who aren't interested in living in a Kremlin proxy state have valid concerns. They only have to look to Belarus -- a nation that Russian President Vladimir Putin managed to seduce away from International Monetary Fund assistance in favor of his neo-Soviet-style Eurasian Union bloc -- to see the perils of overdependence on Russia.

How has that worked out for Belarus? Well, in 2007, Russia fiddled with its natural gas tap that runs across Belarus and into Europe, forcing Belarus to pay more for the privilege of being a Russian middleman. Belarus could have recently gained some independence from the Russian sphere had it managed to qualify for loans from the International Monetary Fund in 2012, but because it couldn't get its act together and was rebuffed by the IMF, Belarus was forced to climb aboard Russia's Eurasian Union. The latest IMF assessment of Belarus, issued in October, states that "the account is deteriorating more sharply this year than earlier envisaged, against a background of slow growth and declining but still high inflation."

Like Belarus before it, Ukraine is at a critical junction, with a shot at diversifying its economy by striking a better balance between Russia and the West. Ukraine has signed an oil and gas deal with Italy's Eni and France's EDF that could be worth up to $4 billion, and earlier it had agreed to a $10 billion shale gas deal with American company Chevron. Such deals could help Ukraine become an energy supplier rather than a Russian middleman or client. And Russia really doesn't like it when other countries date around and play the field. Which explains why if you Google "shale gas" in the English-language Russian media, you would think that it was about the worst thing in the world.

But revolution is about more than just watching "How to Start a Revolution," the critically acclaimed documentary about nonviolent-revolution expert Gene Sharp, on YouTube. As the oft-cited military saying goes, "Amateurs talk tactics; professionals talk logistics." Ukrainian protestors probably won't be able to meet the logistical requirements for a successful revolution. At least not now.