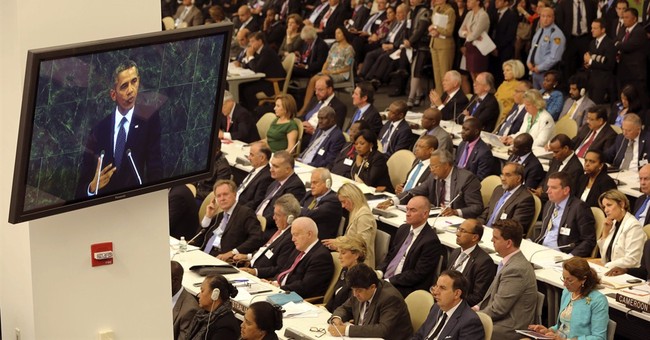 PARIS -- You're probably thinking that there are better things to watch than the annual meeting of the United Nations General Assembly -- like maybe something featuring narcissistic birdbrains or pretentious toddlers. But you can actually get all of the above this week by tuning into the webcast of this annual gathering of world leaders.

Cut through all the posturing and fluffing, and it's a fascinating exercise in predicting future global events. Playing armchair CIA analyst is a lot more interesting than playing Candy Crush or Angry Birds.

I think back to last year's edition of the U.N. gathering, during which the prime minister of Mali, Cheick Modibo Diarra -- a professional acquaintance whom I had debated on a panel in Morocco -- pleaded with the world community to help save his country from Islamic extremists. I listened to Diarra's lengthy speech and thought, "Oh wow, he really needs a hug ... from a broad international military coalition."

Did the U.N. do anything about the situation? No, of course not. Its actions are only as valid as the will of at least one member nation -- unless it's a question of obstructing military action, which requires nothing more than a hand in the air. A few months later, Diarra was deposed by a military junta, and France began what ultimately turned out to be a successful military cleansing of extremist factions in Mali.

So that was last year's big "tell" -- the speech that hinted at all hell imminently breaking loose -- and every year there is at least one such instance. You can usually pick it out if you watch carefully. But why should you? Well, because as we've seen with the Syrian situation, we're in an era where the world is so connected that communication, diplomacy and military mobilization can shift almost overnight. Terrorism, in particular, requires that we care about events in faraway lands. Don't wait for the Community Organizer in Chief to tell America what's important in the world.

Take the British government's 2012 Department for International Development report on Somalia, where Islamic extremist rebels' ongoing beef with the government has just resulted in the local al-Qaeda affiliate, al-Shabaab, going on a shooting and hostage-taking rampage targeting Westerners in neighboring Kenya. The report outlines both the regional risk and the direct risk to the United Kingdom that make any investment worthwhile: "Instability in Somalia also has broader impacts. It presents risks to regional stability, including in Kenya, Ethiopia and Uganda. It is the source of serious threats to the UK and elsewhere from terrorism, piracy and migration."

The reported killing of dozens of people by Islamic militants at a Kenyan mall in recent days, including several British citizens, grimly bears out that rationale. And suddenly, several Western nations are counting their casualties in a faraway land that many couldn't identify on a map. Google searches for "al-Shabaab" are skyrocketing.

So what are the recommended menu items at this year's U.N. chinwag? Any speech on Syria by French President Francois Hollande will be worth analyzing. The same goes for any reaction from Russian President Vladimir Putin. My French sources tell me there is already "fizz in the water" between the two men on a personal level. The French are drafting the resolution to cement Syria's chemical weapons handover to international control. Hollande wants to include automatic consequences for noncompliance or failure, while Russia -- likely concerned about the possibility of Assad being set up by a rogue entity -- isn't buying the idea of a trigger clause.

Hollande and the French might also provide tip-offs during the U.N. confab about some of the other potential flashpoints on the DGSE's (French foreign intelligence's) radar that could rapidly become major global conflicts -- specifically those brewing in the Central African Republic and the Congo. The reactions of other nations -- particularly the heavily invested China and its main geopolitical ally, Russia -- are key to predicting how future international conflicts in these nations might be handled.

New Iranian President Hassan Rouhani's speech to the General Assembly will be worth decrypting in the context of Iran's role of sending proxy fighters and intelligence operatives into Syria and other countries in the Middle East. Look beyond the smile and the "moderate" branding to the significance of his actual words.

If you've ever wanted to play spy, now is your chance. This is exactly what an intelligence analyst does -- and this week, you can do it from your recliner with a tasty beverage in hand.