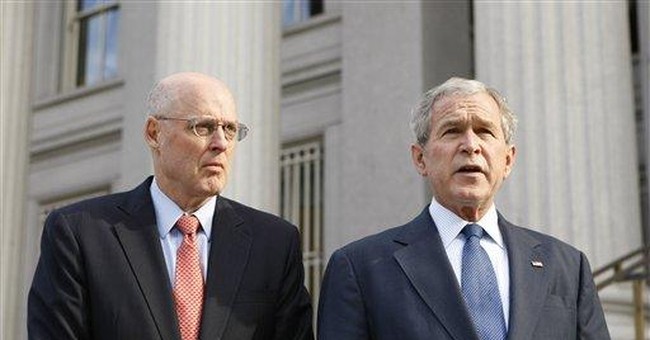 Ever walk into a Starbucks and see a bunch of people sitting there debating textbook theories and solving all the world’s problems over a mocha java? If so, then you’ve visited a University of Starbucks campus.

These are precisely the kind of people who have gotten America into the current economic mess. That’s because when there’s a serious problem to deal with, their instinct is to theorize and philosophize. If their corduroys were on fire, they would sit there pondering the nature and deeper meaning of the flames.

Now, the sophisticated intelligentsia of Team Grande Venti – which means something like “large” and “bucket size” in Starbucks-Italian, but I prefer the French version of “grand” meaning “big”, and “vent” meaning “wind” - are about to set up campus in Obama’s White House to advise him on economic issues.

Let’s take a look at some of the players:

Barry O’Media has appointed another retread from the Clinton administration - all of whom I like to qualify in the new “Change Administration” as “leftover change”. Former Treasury Secretary Larry Summers will play a key role on Team Grande Venti. Summers has barely ventured outside of academia and Harvard. When he did, it was as Chief Economist at the World Bank, where he signed off on a memo musing about such pressing world banking issues as exporting pollution to third world countries.

How do you even do that? Via FedEx? Apparently so. According to the memo: “I think the economic logic behind dumping a load of toxic waste in the lowest wage country is impeccable and we should face up to that.” Summers later called the whole thing “satire”, which makes total sense considering how often people confuse the World Bank with the Colbert Report. I believe the last time I went to a comedy show in NYC, the comedian confessed that he gets most of his material from the World Bank.

Meanwhile Obama’s solution is to keep throwing money at the problem, saying he wants yet another stimulus that is “significant enough that it really gives a jolt to the economy.” How many government administered “jolts” does the economy need before it shows some sign of life? If he was an emergency room doctor, he’d be working his way through the morgue with a defibrillator.

Obama added: “It is going to be of a size and scope that is necessary to get this economy back on track.” He doesn’t know what that is yet, because the University of Starbucks Economic Department has yet to convene with Barry O’Media. Just because he’s already acting like he’s the president with a special sign for his podium, weekly Internet addresses, and a website for his government (change.gov), doesn’t mean he can be expected to provide any answers yet. Because the last thing Obama would want to do is give President Bush the sharp elbow in any matter than isn’t strictly symbolic.

The jolt the economy needs is the one that Ronald Reagan gave the country: Encouragement. And the message that if government backs off, each individual can work his way out of this. Barry has already been down in the mouth since he was elected.

The problem is that liberals won’t lay off. They tell the auto industry what kind of cars they can build, they tell restaurants how much salt they can use in their food, and in Canada this week the heavily liberal judicial branch told Air Canada how many extra free seats fat passengers must be given.

Still, if you’re a CEO making millions, now is your chance to prove why you’re paid the big bucks. It’s like A-Rod at the plate in the final inning of a tied-up World Series. He earns his full worth in that single moment, and isn’t expected to collapse into putty on the mound and start crying for his mommy. You aren’t either. Put your hands back in your own pockets and do what you’re paid to do – fix messes. This proposal Obama is asking you to write in exchange for bailout bucks should contain only two words: “Hands off.” And maybe one of these sideways smileys: :p

Meanwhile, Obama says of the “big three” automakers: “I was surprised that they didn't have a better thought-out proposal when they arrived in Congress.” That’s great, self-effacing satire. Almost on par with The Onion. Or the World Bank.