Rachel Alexander
|
Posted: Oct 11, 2021 12:01 AM
Share   Tweet
The opinions expressed by columnists are their own and do not necessarily represent the views of Townhall.com. 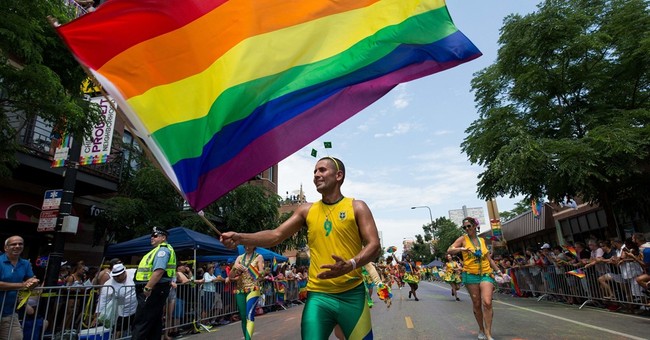 It’s no longer considered politically correct to discuss changing physical attraction from one gender to the other, but some are forging ahead anyway with exploring it. The left preaches that people should be able to determine their own sexuality, but hypocritically doesn’t defend the freedom to change from same-sex attraction to opposite-sex attraction.

A new study published in the Journal of Human Sexuality examined 75 adult males who reported same-sex attractions and wanted to explore their sexual attraction fluidity. Therapists skilled in reintegrative therapy worked with the men to seek and resolve past traumatic memories. The focus was on resolving this emotional pain, not actually changing attraction, which can occur naturally as a result of this therapy. One participant explained,  “My therapist never tried to get me to change my sexuality, or who I was attracted to, but instead helped me to process traumatic memories from my past that had brought me shame and fear.”

Another of the participants said in response to criticism of the treatment, “If somebody said to me, ‘Oh this is just your religion,’ I would say, ‘So what if it is, how is that your business to determine the validity of my religion? How dare you. Is that not my right?’”

While there is a movement to get rid of “conversion therapy,” which in the past has involved aversion techniques like shame, pain, or coercion to try to force people to change their gender attraction, reintegrative therapy is nothing like it. In reintegrative therapy, the patient drives the treatment, it’s their choice. For whatever reason, they have chosen to change their sexual attraction. People on both sides are finally starting to understand that sexuality is fluid, it’s not just something that can be boiled down to either, “Are people born gay, or is it a choice?” And so far no one has discovered a “gay gene” either.

Its proponents honestly admit it doesn’t work for everyone. Dr. Joseph Nicolosi, Jr., is following in the footsteps of his father who pioneered the therapy. His father readily admitted that about one-third of his clients did not change their sexual attraction. However, the therapy helped them in other areas, such as improving family and peer relationships.

Finding success with reintegrative therapy in sexual attraction, Nicolosi also just expanded the treatment recently to binge eating. He found success there too, with all six of the participants from diverse backgrounds in the study showing progress in stopping binge eating. Five of the six also showed improvements in their well-being.

If people should be allowed to choose which gender they are attracted to, then why aren’t they allowed to change from same-sex to opposite-sex attraction? The left is getting conversion therapy banned all around the U.S., which is understandable considering a lot of the harmful side effects some people had from it. But if someone voluntarily chooses as an adult to explore changing their attraction, it seems fair to allow them the option.

The transgender arena is undergoing a similar controversy, as those deciding to turn back from changing genders find there is little support. But a lot of transgenders go back and forth, so why are the ones who want to transition back treated so poorly? And anyone who dares defend them gets labeled as transphobic.

Unfortunately, the left wants to silence anyone who offers any option not out of their playbook on how gender and sexuality must be treated. You’re allowed to be gay, you’re just not allowed to change from gay to straight. When The Daily Wire’s “The Michael Knowles Show” interviewed Nicolosi about regenerative therapy, a Twitter account with five followers tweeted at one of the advertisers, Harry’s, complaining. Harry’s, which makes skincare products for men, caved and tweeted that they would no longer be advertising on the show.

The battle of gay rights is essentially over. Gays can marry and have children, and students are taught to be proud of being gay. So why can’t gays who want to explore changing their sexuality consider becoming straight of their own volition? Wasn’t the whole gay rights movement about letting gays decide what they want to do sexually?

Regenerative therapy isn’t about religion. It’s about individualism, people making choices for themselves. This is why so many gays and transgenders are emerging on the right. They realize the left only allows one viewpoint about LGBT issues, and at the same time, they see through the left’s lies that the right is their enemy.

Lady MAGA is an outspoken conservative gay man who dresses in drag, and so Delta fired him and Instagram banned him. Many of today’s most well-known conservative leaders are gay, including Trump’s Acting Director of National Intelligence and cabinet member Richard Grenell, Townhall’s Guy Benson, talk show host Tammy Bruce, talk show host Dave Rubin and political analyst Rob Smith. No one believes the left’s hateful talk anymore that conservatives hate gays, and so the more they continue with it, the more gays will flock to the GOP so they can make their own decisions about their lives and choose their own beliefs.