Brnovich Is Running for the U.S. Senate and the Left Is Terrified

Rachel Alexander
|
Posted: Sep 20, 2021 12:01 AM
Share   Tweet
The opinions expressed by columnists are their own and do not necessarily represent the views of Townhall.com. 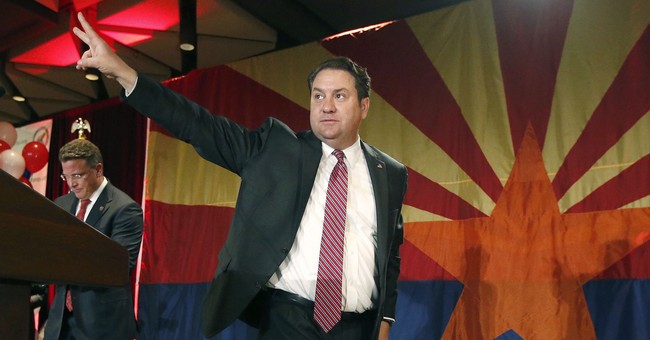 There are generally three types of politicians. The first is the AOC type, always saying outrageous things that generate attention by riling up the base, but they never get much accomplished other than raising money for themselves. The second consists of those who get into office and then proceed to compromise with the other side, the John Kasich types. The third group is those who actually get a lot done in line with their principles, usually quietly so they can get more done without being noticed. Arizona Attorney General Mark Brnovich is the third type.

For the first six years he served in that office, he quietly plodded away, forging victories for freedom, the Constitution and conservative principles. But within the past year, the left finally took notice, and now that he is running for U.S. Senate, they have made him a target. The Arizona Republic runs nearly daily attacks on him. It’s become a joke that the editors and reporters there sit around every morning discussing who is going to write the latest hit piece on him and what it will cover.

He’s been endorsed by Mark Levin, who told him “You’ve got guts.” Sean Hannity has all but endorsed him, frequently inviting him on his show now that the left has put a target on his back. He has enough name recognition that he can beat Democratic incumbent Sen. Mark Kelly, who the MSM has labeled one of the five most vulnerable Democratic senators in Congress.

The level of principled work Brnovich has done while in office is staggering. He has four lawsuits already  — yes four, and he’s leading on them —  against the Biden administration over illegal immigration. He defended two of Arizona’s election integrity laws all the way to the Supreme Court and won earlier this year, in Brnovich v. DNC. He took on the Maricopa County Supervisors multiple times in their efforts to thwart a ballot audit of the 2020 election, standing firm behind the Senate Republicans.

He was the first person in the country to sue Biden over his vaccine mandate for businesses of 100 employees or more, and followed up with a letter he wrote with other attorneys general. He and several other attorneys general sued Biden over an executive order regarding the “social cost of carbon,” which essentially sneaks in the Green New Deal without going through Congress.

He’s sued big tech, filed a brief in a lawsuit against Gov. Doug Ducey’s COVID-19 restrictions and issued an opinion stating that churches have the right to remain open during COVID-19. He testified at an IRS hearing in support of a rule that Trump eventually adopted, prohibiting the IRS from possessing nonprofit donor information.

He filed an amicus curiae brief with the Supreme Court supporting David Daleiden, who is being wrongfully prosecuted for exposing Planned Parenthood. He filed another one with the Supreme Court in Dobbs v. Jackson Women’s Health Organization, defending Mississippi’s 15-week ban on abortion, going further than many did, calling to overturn Roe v. Wade.

He led an amicus curiae brief with other attorneys general at the Supreme Court in the case New York Rifle and Pistol v. Corlette, which challenges New York’s law that only allows gun ownership for good cause. Gun experts say this case could be bigger than District of Columbia v. Heller.  He led a successful amicus curiae brief at the Ninth Circuit opposing California’s ban on high-capacity magazines. He submitted two comments opposing Biden’s ATF rules that go after ghost guns and make it more difficult for the handicapped to obtain braces to use with guns.

He sued the Biden administration over a requirement in The American Rescue Plan Act which prohibits states from lowering taxes for four years. He led an amicus curiae brief at the Supreme Court supporting Americans for Prosperity, which successfully got a California statute requiring disclosure of the identities of donors who give more than $5,000 to a charity struck down.

Along with other attorneys general, he sued Biden over a move to extend federal antidiscrimination laws to transgenders, which affects which bathrooms they use and sports they participate in.

Locally, he threatened to sue the City of Tucson over its vaccine mandate and so they dropped it. He sued ASU over giving a sweetheart deal to a hotel so it could avoid paying property taxes. He filed an amicus curiae brief in a successful lawsuit filed by The Goldwater Institute against the city of Peoria over violating the Arizona Constitution’s gift clause by giving handouts to a private university.

There is a long list of items he is defending, such as Arizona’s new law banning aborting babies solely because they have disabilities. He’s defended in court Arizona’s ban on critical race theory and mandatory masks in schools, He defended Arizona’s law banning the investment of taxpayer dollars in companies that boycott Israel, and filed an amicus curiae brief in support of Arkansas’s similar law.

Brnovich is up against two billionaires trying to buy the election in the primary. One is Fortune 500 CEO Jim Lamon, who has no record to speak of. He’s come under criticism for accepting COVID-19 relief funds, although after being publicly outed he returned them.

Out-of-state Silicon Valley billionaire Peter Thiel is funding one of his employees, Blake Masters, $10 million to run. Masters, who also has no record in politics, has attempted to depict Brnovich with the unfounded claim of not being aligned with Trump enough, but Thiel is also funding never Trumper (until he started running) J.D. Vance for Senate in Ohio with $10 million. $10 million is the most money ever contributed by someone to a Senate race.

Brnovich isn’t getting endorsements from police and firefighter unions because he used to head up the Goldwater Institute’s Center for Constitutional Governance, which frequently sued unions. But Republicans know his record, and a recent poll showed him double digits ahead of his opponents. Democrats are terrified, because this is an actual conservative with a record, not just RINO talk.