The Guy Who Could Save Our Republic: Arizona Attorney General Mark Brnovich

Rachel Alexander
|
Posted: Feb 22, 2021 12:01 AM
Share   Tweet
The opinions expressed by columnists are their own and do not necessarily represent the views of Townhall.com. 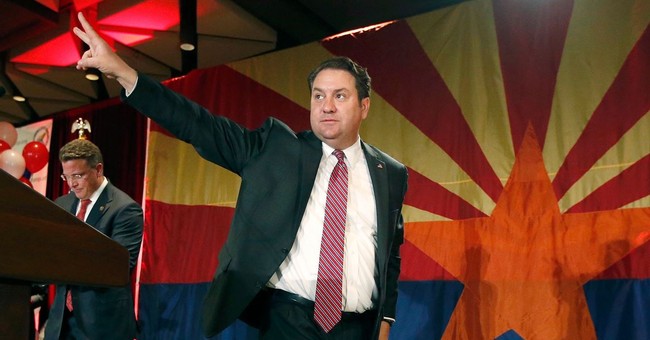 During a time when many Republican officials have been unwilling to do anything to battle election fraud, a few are holding firm.

Last year, Arizona Attorney General Mark Brnovich got involved with six election lawsuits, including successfully suing the Democratic county recorder when he tried to send out mail-in ballots to everyone in Maricopa County. Brnovich wrote to the Maricopa County Board of Supervisors a few days after the election urging them to more than double the hand audit. He also filed an amicus brief in support of the Arizona State Senate demanding that the supervisors turn over the Dominion voting machines for inspection.

The litigation arose before the 2016 election and involves two laws Arizona implemented against election fraud. Two separate cases were consolidated, Brnovich v. Democratic National Committee and Arizona Republican Party v. Democratic National Committee. One law requires that a ballot be thrown out if it was cast in a precinct other than the one matching the voter’s home address. The other law bans ballot harvesting, where third parties (with a few obvious exceptions including close family, household members and caretakers) are allowed to turn in ballots. The DNC sued Arizona over the two laws, claiming racism (no surprise there). The federal district court judge and a three-judge panel in the Ninth Circuit Court of Appeals sided with Arizona, but the full Ninth Circuit panel overruled the smaller panel.

In order to prove racial discrimination under Section 2 of the Voting Rights Act, there must be proof of a substantial disparate impact. There is no evidence of this. The district court found that the out-of-precinct policy had no impact on 99.9% of non-minority voters and 99.8% of minority voters. So the DNC is attempting to get the court to ignore the word “substantial” to get around this. Brnovich said in his brief that doing so would lead to chaos. For example, one slight change in voting laws could increase Hispanic voter turnout by 2% while decreasing black turnout by 2%. As for the ballot harvesting ban, the DNC (and Arizona’s Democratic Secretary of State Katie Hobbs) failed to provide any purported evidence of racial discrimination.

Ten senators, led by Ted Cruz, filed a brief supporting Arizona. The Trump administration also filed a brief in support of Arizona, saying the laws do not promote racial discrimination in voting. Surprisingly, when Biden first took office his administration supported that position. Since then, Deputy Solicitor General Edwin Kneedler backtracked slightly and said in a letter to the court that the administration disagrees on a few points, but didn’t go any further than that. “The Biden administration basically agreed that our voting laws don’t violate Section 2 of the Voting Rights Act,” Brnovich told The Daily Signal.

If banning ballot harvesting is racist, then 19 other states must be racist too since they also ban the practice. Most states also require citizens to vote at their assigned precinct.

We saw plenty of evidence from the 2020 election where unscrupulous Democrat activists harvested ballots from voters, coerced them into filling them out or filled them out for them, and turned them in. Project Veritas caught activists taking advantage of elderly Somali immigrants in order to add votes for Rep. Ilhan Omar in Minneapolis. Project Veritas also caught the Biden campaign’s Texas Political Director Dallas Jones harvesting ballots from dead people, homeless people and nursing home residents. There are countless more stories like this. It is a real problem.

This is a key decision because if laws like this can be struck down for being racist, you could make the argument that a lot of election integrity laws could be struck down as racist. Let’s say common-sense precautions, such as requiring extra poll watchers from both parties, results in 1% fewer minority votes. That is so small it is statistically insignificant. But under the Democrats’ standard, that tiny difference would constitute racism.

We may not have been able to defeat election fraud in the 2020 election in time; they broadsided us. But it is imperative to stop it or Republicans may never hold significant offices again. It is the single most important issue we must focus on right now. The future of our country hinges on this decision.

Brnovich is going to be under one of the most horrendous attacks by the left we have ever seen. They already have their sights on him. He was the first state attorney general to sue Google. He filed a lawsuit immediately after Biden took office over the administration’s 100-day freeze on deportations. He led several amicus briefs defending the Second Amendment and religious liberty. He’s taken on the higher education establishment and continues to fight them in state court. And before becoming AG, he served as director of the Center for Constitutional Government at the Goldwater Institute.

This will be one of the biggest political fights of our lifetime. Although the Biden administration has backed down on the case, the so-called conservatives on the Supreme Court have proven they cannot be trusted. Most political fights are fought very publicly in the legislative and executive arenas, which is where most major policy is made. The Supreme Court only accepts about 80 cases each year, but a handful of its cases have profound implications. This is the sleeper case no one knows about that may end up like a Roe v. Wade.