Last Chance: Will Mitt Romney Jump Into the Presidential Race? 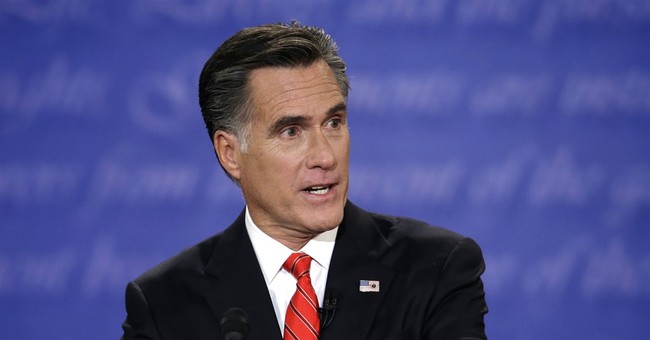 The Republican establishment and its power brokers are starting to panic about the likelihood of Donald Trump winning the presidential nomination, and even the respected Club for Growth is now running ads against Trump. It is not so much Trump’s over-the-top statements that bother them, but the fact he could lose to Hillary Clinton. In general election polls, Trump is losing by as much as double digits to her, in contrast to a couple of the other Republican candidates who are tied or ahead of her. Many large donors have stayed out of the race, too unsure of the outcome. Notably, they include many of Mitt Romney’s 2012 National Finance Committee members.

The top brass in the GOP is now seriously talking about alternative possibilities to stop Trump — as well as Ben Carson, who is also seen as an outsider incapable of winning the general election. Some are even suggesting a brokered convention, to change the nomination to Ted Cruz or Marco Rubio, or even Romney. While brokered conventions are rare, they can be radical game changers. In 1968, the Democrat Party picked Hubert Humphrey as their nominee at a brokered convention, even though he had not participated in the primaries.

A brokered convention is triggered if no candidate gets a majority of delegates from the state primaries, and the delegates cannot settle on one candidate after the first round of voting at the convention. After that, delegates are free to vote for any candidate in further rounds of voting.

Even if one candidate gets enough delegates from the primaries, if enough unpledged delegates are pressured to vote for someone else in the first round of voting, it could trigger a brokered convention. Of the total 2,380 Republican delegates, 1,719 are pledged delegates. The unpledged delegates have close ties to the GOP, so it is quite realistic they could be persuaded to change their votes to someone other than Trump.

With several strong candidates likely to stick it out until the end of the GOP primary, and the fact that 29 states award only proportional delegates, not winner takes all, a brokered convention is a real possibility. Plus there is the RNC’s recently added “Rule 40,” which requires the nominee to have additionally obtained the support of a majority of delegates from eight or more states.

Consequently, there has been talk for months of convincing Romney to enter the race. Before the Republican candidates started entering the race at the beginning of this year, Romney was leading all of them in polls.

Many voters are tired of Obama’s inexperienced, bumbling leadership, which has resulted in the worst economy since the Great Depression and the spread of ISIS terrorism, and so are reacting by looking to the opposite — a mature, stable candidate; basically someone Reaganesque. The older candidates currently in the race, like Jeb Bush and John Kasich, are too moderate to rev up the conservative base like Reagan did. In contrast, Romney moved to the right when he ran in 2012, deserting more moderate positions he had been forced to take as governor of Massachusetts. Similarly, when Ronald Reagan ran for president, he took a sharp turn to the right from his tenure as governor of California.

Romney has an avid fan base that hasn’t let up on their pressure to convince him to run, so much that Erick Erickson of RedState wrote an article last month complaining about their fervor.

I ran into Romney at the airport a week ago. He was traveling by himself, wearing glasses and no one recognized him. He had been in Phoenix headlining a fundraiser for John McCain, which was reportedly turned into a “draft Romney” event. I walked up to him, introduced myself as a conservative columnist, and asked if he was going to enter the race. He cryptically responded, “If the others agree,” and went back to his iPad. Who was he referring to, the GOP power brokers? Convincing the other candidates in the race to drop out? I spoke with Romney insiders afterward, who told me that he is considering entering the race in January.

One sign Romney may really be considering entering the race is how much he’s stayed in the spotlight the past year. Politico notes the reasons why, “Opposing the Iran deal, releasing adorable photos with his grandkids, tut-tutting over Republican candidates when they’ve crossed the line in their attacks, even filming a promo for Stephen Colbert’s new late night talk show.”

Another sign is when asked recently about running, Romney responded in the present tense, saying, "I'm not running," rather than, "I will not run." He has curiously said several times that Trump will not be the eventual nominee.

The problem for Romney is the deadline has already passed in about 21 states to get on the ballot. He would only be able to run in those states as a write-in candidate. New York Magazine analyzed the chances of Joe Biden similarly entering the Democratic primary late, and noted that a candidate entering the race in mid-January will have “forfeited 2,232 delegates, or about the number needed to become the nominee.” If Romney entered the race at the beginning of January, he would be slightly better off, but would still miss running in almost half the states.

Another problem is Romney has missed several primary debates, and there is only one left in January. The Iowa caucus takes place on February 1. Of course, Romney participated in so many debates in previously elections that voters have a good feel for what he’s like.

Will Romney jump in and become the next Ronald Reagan? It may be a tough, uphill process, but it could happen. The reaction to Trump has been “you either love him or hate him.” While Trump appeals to many due to his outsider status and candidness, he has also turned off a lot of Republicans with his brash remarks.

Cruz is beating Trump in the Iowa presidential caucus polls (although still lagging in national polls), and generally, any candidate who wins in Iowa or New Hampshire goes on to get the nomination. There are rumors of an effort in New Hampshire to enable Romney to win that important primary. At this point, Cruz probably has the best chance of any of the Republican candidates against Trump. But can he beat him, or will the GOP power brokers draft Romney?