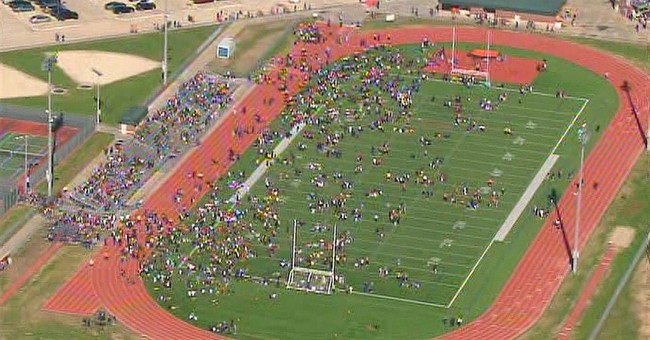 Last month, I wrote about a high school football coach at my alma mater who was bullied into dropping a voluntary prayer he performed on the 50-yard line after games. He was told if he didn’t stop praying, he would be fired. After this all came out publicly, he merely gave a speech at the next game, instead of the usual prayer he’d given for the past nine years.

But was his praying unconstitutional? Liberty Institute, which deals with religious constitutional issues, doesn’t think so, and agreed to represent him on the legal aspects. Last Friday night, with the law on his side, coach Joe Kennedy resumed his prayer after the game on the 50-yard line, to the cheers of hundreds who showed up to support him — including the opposing team, which surprised him by joining him for the prayer.

So what does the law say? The U.S. Supreme Court has whittled away the First Amendment’s religious liberty clause over the years, restricting prayer in public places to certain criteria, primarily known as the Lemon test, which analyzes the extent of government involvement. Teachers generally can no longer lead prayer in class, but there is no clear-cut legal decision against a football coach saying a prayer.

Generally, nonsectarian prayers have been upheld in public places by the Supreme Court. Coach Kennedy’s prayer is nonsectarian, generically mentioning God with no specific reference to any religion. It is voluntary, team members chose on their own over the years to join him. It is performed after the game, when he is no longer acting as a coach. Overall, it seems to clearly pass the Supreme Court’s Lemon test for constitutionality.

Detractors point to Supreme Court cases where prayer in schools has been struck down — but those cases can be distinguished. In Santa Fe Independent School District v. Doe, the Supreme Court ruled that students praying over a loudspeaker system at football games was unconstitutional. The court based its decision on the fact the prayer was done using the school’s equipment — the loudspeaker system — as well as the fact that everyone attending the game was essentially required to hear it.

Additionally, in comparison to other instances of prayer at football games around the country, Coach Kennedy’s prayer is nothing. At the University of Tennessee, a member of the clergy used to deliver an invocation before games. It was broadcast throughout the stadium to everyone, not just a voluntary prayer after the game that only a few team players optionally chose to hear. After intimidation from the Freedom From Religion Foundation, they halted the practice, but there was never a court ruling against it.

The way the Bremerton School District went about this was so heavy-handed that it is very unlikely any court will approve of how they handled the situation. Instead of trying to work out a solution or compromise with Coach Kennedy, the District simply threatened to fire him and sent him a letter to cease and desist, claiming it violated the separation of church and state.

I spoke with Coach Kennedy’s attorney from the Liberty Institute, Hiram Sasser, who told me, “The appropriate solution is the school should make sure the audience knows Coach Kennedy is doing this with the team in their private capacity. The solution is not to squelch or ban speech, simply explain it's private speech.” He pointed to Wigg v. Sioux Falls School District, a decision by the 8th Circuit Court of Appeals, which upheld an elementary teacher’s right to teach a Good News Club after school because it was private free speech at that point. Like the loudspeaker prayer at the University of Tennessee, this goes far beyond Coach Kennedy’s voluntary, after-game prayer.

Sasser sent the district a letter which said, “The prayers are Coach Kennedy’s private religious speech, and no reasonable observer could conclude that BHS sponsors, endorses, or encourages student participation.”

While this happened in a blue state, it wasn’t Seattle. It was Bremerton, where I grew up and attended high school with Coach Kennedy. Bremerton has a Republican mayor; it is not a hotbed of liberalism. If it can happen there, it can happen anywhere.

Fortunately, even some on the left are saying enough is enough. Matt Calkins, a writer for The Seattle Times who describes himself as “not religious,” penned an article entitled, “Why Bremerton Coach Joe Kennedy’s Stance on Postgame Prayer is Admirable.” He notes that not only did Coach Kennedy pray after the game with no objections for years, but it was “embraced.” Additionally, he noted, “instead of saying ‘in God’s name’ at the end of the prayer, he invites those around him to use any name they want.”

The Liberty Institute says it will sue the district if Kennedy is fired, as a violation of his religious rights. Kennedy is well-loved by the players, which explains why so many showed up to support him, even atheists and agnostics. A Seattle Times article covering Friday’s game contained not one single criticism from students and others attending the game. A veteran, Kennedy served 20 years in the Marine Corps and was in both Operations Desert Storm Iraq and Desert Shield in Kuwait. He told Todd Starnes of Fox News, “I spent 20 years in the military defending the Constitution and the freedoms that everybody has. All of a sudden, I realized that people who work for the public schools don’t have the same constitutional rights that everyone else has.”

This is about much more than a small hometown football team with a coach who prays. This is just one further step in the relentless, increasing efforts of progressives to stamp out Christianity everywhere from society. The march continues, and if there is no pushback, it will go much further, as we’ve seen happen in other countries, until there are no churches left but state-run churches, with people forced to hide their worship in secret at home. Christianity is already being stamped out in the U.S. at universities and even private employment because it is now considered offensive to the LGBT community. Longstanding monuments and statues are being removed everywhere because they are supposedly offensive to atheists. Christian books are being purged from schools and libraries because they teach things like abstinence, monogamy and one God.

Our country was founded on Judeo-Christian principles, which are embodied in the Constitution. Many have died defending these principles, died to defend our freedom to "bow the knee" at the 50-yard line. Yet this history, these principles and the sacrifice of so many are hardly mentioned in public school texts today.

There is now a Facebook page and petition to support Coach Kennedy. It is imperative to support him standing up for our constitutional rights. Not everyone can take the heat and the pressure, but if we don’t back him, they will come for us next. Who better to stand up to intense pressure than a combat Marine and football coach?

The school district can easily change their policy and resolve the controversy. Let’s hope they do the right thing. Spending thousands of taxpayer dollars on a pricey Seattle law firm to attack the coach when it flies in the face of constitutional law is ridiculous.