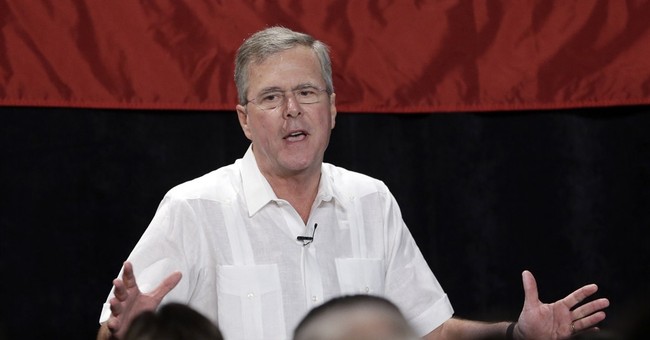 Only our bumbling Republicans could take the number one issue we have against Obama, losing to Islamic terrorism, and turn it into George W. Bush’s fault. Beginning with Jeb Bush, several Republican presidential candidates said recently they would not have gone into Iraq militarily had they known what we know now. The others are Texas Sen. Ted Cruz, Wisconsin Gov. Scott Walker, Ben Carson, Rick Santorum, Carly Fiorina, Ohio Gov. John Kasich, Kentucky Sen. Rand Paul, and New Jersey Gov. Chris Christie.

Iraq has fallen apart under Obama - not George W. Bush - and so it is absurd that Republican presidential candidates are scrambling to distance themselves not from Obama, but Bush. Islamic terrorism has become far worse under Obama. Earlier this month, ISIS took over Ramadi, the capital of Iraq's Anbar province, just 70 miles west of Baghdad. In contrast, Bush had the terrorists on the run, dismantling al Qaeda piece by piece, which led up to the capture of Osama bin Laden shortly after Obama took office. Under Obama, ISIS has ballooned into arguably the most serious issue facing us today. Matthew Olsen, a senior US counter-terrorism official, says ISIS now controls territory the size of Great Britain.

Democrats have always been better than Republicans at spin, enhanced by help from the left-leaning media. The few right-leaning media outlets are fairer in their coverage, asking tough questions of Republicans. So when Fox News’s Megyn Kelly and Chris Wallace asked candidates, “Would you have invaded Iraq in 2003 if you had known then what we know now?” the rest of the media pounced on it.

There are so many problems with the question, where do you start? Conservative author Charles Krauthammer notes that even Obama admitted the Iraq War was a success. Nevertheless, Obama fully withdrew the troops from Iraq afterward, ensuring chaos would ensue. Krauthammer wonders why no one is asking instead whether Obama’s 2011 withdrawal was a mistake.

Another problem with the question is its premises. The question assumes there were no weapons of mass destruction in Iraq, oft-repeated left-wing spin that has gained traction over the years. In reality, Iraq had WMDs, and plenty of them were developed or obtained by Saddam Hussein, they weren’t provided by the U.S. to Iraq. Even the left-leaning New York Times came out with an article in February reminding people that chemical weapons were found in Iraq, reporting how the CIA bought at least 400 nerve-agent rockets from a secretive Iraqi seller in order to ensure they would not end up in the hands of terrorists. Additionally, in 2004, the U.S. Departments of Energy and Defense proudly announced they had removed 1.77 metric tons of low-enriched uranium from Iraq.

Incredibly, since the Pentagon during the Bush years kept the knowledge of these remaining WMDs secret, instead of releasing the information to refute the tired old mantra about no WMDs, soldiers in the Iraqi desert who encountered them after the war have gotten sick. According to The New York Times last fall, “American troops reported finding approximately 5,000 chemical warheads, shells, or aviation bombs in the years following the 2003 invasion of Iraq.” Considering all of the American servicemen who have become ill encountering the remaining WMDs in Iraq, does former Defense Secretary Colin Powell have any remorse for his flip-flop on the presence of WMDs?

Deroy Murdock in National Review writes that as a result of pretending WMDs didn’t exist, around 2,500 canisters of nerve and mustard gas were left in Iraq, and so “now they are in the humane and prudent hands of the Islamic State.”

There is a long list of informants who told U.S. intelligence that Iraq had WMDs, including Saddam Hussein’s own son-in-laws. Former Iraqi General Georges Sada wrote a book in 2006 detailing how Hussein clandestinely transferred his WMDs to Syria. No matter how many of these accounts show up, the left continues blindly repeating its talking points, there were no WMDs, generally relying on the fact that Powell later said one source, “Curveball,” wasn’t credible.

It is important to note that the U.S. justification for going to war in Iraq was due to Hussein not complying with U.N. requirements for exposing and dismantling his chemical-weapons stores. It was not solely based upon the presence of “active” WMD facilities, as some media accounts have cleverly twisted the words after the fact to reflect. The fact that no active WMD facilities were found after the war means little - in fact they could have been disbanded precisely because of the successful war. Conservative pundit Ann Coulter points out that we also went into Iraq because they were harboring several terrorists who killed Americans.

The far left and its accomplices in the left-leaning media were against the Iraq War all along; whether there were or weren’t WMDs didn’t matter to them, it was a red herring. They have seized upon the rhetoric of no WMDs after the fact in order to discredit the war.

The GOP flip-flopping is creating a backlash from veterans. One newspaper reports, “Some veterans say they long ago concluded their sacrifice was in vain, and are annoyed that a party that lobbied so hard for the war is now running from it.” It is especially seen as a snub to those vets who lost their lives, limbs, or suffer from PTSD.

The flip-flop will hurt candidates like Ted Cruz the most, who has been seen as an uncompromising conservative stalwart. It will also hurt Jeb Bush considerably, who claims he takes foreign policy advice from his brother.

Since Islamic terrorism is arguably the most important issue facing us today, the flip-flopping could make a huge difference in the presidential race. There is overwhelming evidence that Iraq had WMDs. To ignore it - like the left frequently does when it comes to facts - makes the GOP presidential candidates look silly. When even the left-leaning New York Times continues to report evidence of the presence of WMDs in Iraq, Republican candidates who deny their existence - at the expense of veterans injured by encountering them - risk alienating a key GOP constituency. Republicans have a very good chance to win back the White House in 2016 due to Obama’s terrible record combating ISIS. Letting him off the hook for everything and blaming George W. Bush is a sure way to lose the election.