The U.S. is Racist for not Paying for Every Child in the World 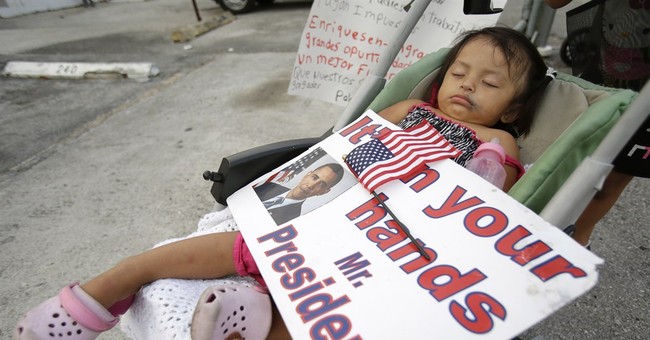 Regardless of how you feel about fixing the border conflict, exploiting the lives of children as pawns is nothing more than a radical leftist Saul Alinsky tactic, to push through an agenda that our representative democracy has rejected. Saul Alinsky’s Rules for Radicals, the playbook of Obama, Hillary Clinton and other liberal Democrats in power today, taught the left how to undermine the successful, brilliant, longstanding representative democracy this country was founded on, in order to accomplish their unpopular, unfair and historically discredited radical agenda.

Alinsky advocated using arguments that sound “moral” to trick people emotionally. Who could be against poor children? Is dumping illegal immigrant children in various states around the country instead of deporting them - separating them from their parents - moral? No, it is really despicable, since it exploits the children in order to shove through a radical open borders agenda.

Their so-called “compassion” is selective. Why not rescue all the poor children in the world and invite them to the U.S.? Of the 2.2 billion children worldwide, almost half, or 1 billion, live in poverty. The population of the U.S. is a little over 300 million, so there is no way the U.S. could possibly afford to take in and pay for all those children.

The left’s Illegal immigration defenders accuse Americans of being racist who do not want to allow the illegal immigrant “children” in the U.S. to remain … yet note the Obama administration is generally releasing teenagers who are mostly ages 15-17. If that’s true, then isn’t the left equally as racist for not helping children in the poorest countries too? The poorest countries in the world are predominantlylocated in Africa. These children are worse off than the primarily Hispanic illegal immigrant children who crossed over our southern border illegally.

An argument could be made that the left is racist against the poorer blacks; instead giving special preference to Hispanic children. But conservatives aren’t cold-blooded enough to demonize the left this way, being the real party of compassion. Conservatives generally prefer immigration policies that are spread out fairly across countries, not weighted in favor of certain countries (ethnicities or races) over others.

The recent influx of illegal immigrant children are being dumped in conservative states, not just in the open borders states that welcome them. They are shipped as far away as conservative Alaska, which makes no sense, considering its distance from their home countries and parents. This is yet more evidence the effort is not humanitarian, but a political ploy using children as pawns.

Hypocritically, the liberal states are protesting the dumping of illegal immigrants (or more likely, the conservative parts of those states are protesting), and have successfully forced the administration to stop shipping them there. These include Baltimore, Md., Lynn, Mass., Hazleton, Pa. and Murrieta, Calif.

Even more disturbing, the Obama administration is not informing local governments in advance prior to dumping off these children. Obama is continuing his war between the federal government and the states, which intensified in 2010 when he had his Attorney General, Eric Holder, file a lawsuit against Arizona over its strict new immigration law, SB 1070. We are entering a scary new era where the federal government attacks and litigates against the state governments, setting off a 10th Amendment fight.

We have learned that journalists are only being given partial information from the Obama administration, and are forced to get much of their information through leaks. According toThe Washington Times, “the Department of Health and Human Services has received 53,324 unaccompanied minors from the Department of Homeland Security and has released 48,805 of them.” No one knows these children who are being brought into their localities, and the children don’t know where they’re going.

The increase in young illegal immigrants entering the country began in June 2012, when Obama instructed federal agencies to stop deporting most young illegal immigrants. It is now being revealed that many of these “children” aren’t children, but 22-year old gang members. Texas Catholic Charities admitted to Breitbart.com that most of the “children” are between ages 15 and 17. The children are then placed with foster families, who receive money from the government for their care; an eye-popping $40 per day (pretty incredible if you’ve ever had to pinch pennies and live off Top Ramen for extended periods of time). In addition, the illegal immigrant children also receive health care, public education and an allowance!

Some have gone so far as to compare this abuse of children to Hamas’s use of its own children as shields from Israeli bombing. While not as extreme, it is still wrong to manipulate the lives of children and abuse them for political means.

All of this is happening because Obama realizes that Obamacare, which he had intended to make his legacy, has been a dismal failure. He’s now turning to making amnesty his achievement instead. If he can spread out the illegal immigrant children around the states, where people will be exposed to them, getting to know them - it will become much harder to object to them.