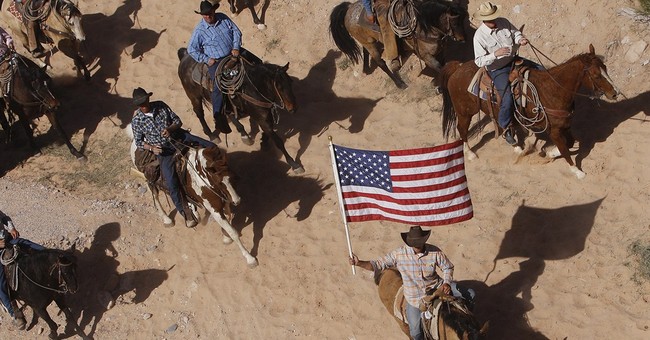 The major news media, with the exception of Fox News, has been deafeningly quiet about the federal government’s thwarted raid last week on a Nevada rancher. Heavily-armed agents from the Bureau of Land Management (BLM) descended upon Cliven Bundy’s ranch, seizing 389 of his 900 cattle. The BLM shut off access to federal lands, claiming he was illegally using them, and a no-fly zone was established for a 3-mile-square area around Bundy’s ranch. A sign was posted - unconstitutionally - limiting the First Amendment to a small designated area. The feds flew helicopters overhead to chase the cattle, knowing full well it could cause them to collapse from running in the 90-degree heat.

Outraged over the heavy-handed tactics, about 1,000 states’ rights activists traveled to Mesquite to support Bundy. Many gun owners showed up lawfully carrying firearms, and local cowboys came riding in on horses. They were afraid that they could be the next targets of a federal government overreach, and felt it was time to take a stand. A few protesters stormed the gate that had been erected to block off federal land, while the crowd chanted “open that gate.” At one point, the protesters blocked all traffic on Interstate 15.

Bundy’s son, Ammon, was shot with a stun gun by law enforcement until he bled, and his sister was pushed to the ground, which was caught on video. Bundy’s son, Dave, was arrested for taking pictures along State Route 170, which had been closed, and his camera was confiscated. He is now reporting a concussion and kidney problems after being stomped on. One man from Utah who joined the protest said he was handcuffed and injured by BLM agents when he attempted to walk through a gated area. Bundy estimates there were approximately 100 law enforcement vehicles and 200 law enforcement officials involved with the raid.

The protesters did not draw their weapons nor attack law enforcement, and Ammon prohibited rifles within the camp. Bundy likened the siege to the 1993 disaster in Waco, Texas, where mostly federal law enforcement agencies descended upon the Branch Davidians compound, resulting in the deaths of 76. It has also being compared to federal law enforcement agents staking out militia members at Ruby Ridge, Idaho, where an unarmed woman holding a baby was shot. Taking place in the Nevada town of Bunkerville, patriots are noting similarities to the American Revolutionary War’s Battle of Bunker Hill.

In response, commissioners in Utah threatened to remove one wild horse for every cow seized of Bundy’s. In Utah, the federal government has been attempting to reduce cattle grazing in order to protect wild horses. Escalating the showdown was a remark Clark County Commissioner Tom Collins made to Utah County Commissioner Darn Bushman. He warned supporters of Bundy planning to come from Utah that those “inbred bastards” “better have funeral plans.”

The dispute began in 1993, when the BLM interfered with Bundy’s grazing rights, citing protection of the Mojave Desert tortoise. It is not clear how cattle are a threat to the tortoise. As Dave Barry would say, “I am not making this up.” They capped his herd to 150 animals on a 250-square-mile rangeland allotment. When Bundy saw his grazing fees were no longer being used to help ranchers, but to thwart them, he stopped paying monthly federal land fees of $1.35 per cow-calf pair, insisting that local government, not the BLM, should be in control of the lands.

Bundy claims that other ranchers were bought out by the federal government. He is now the last remaining rancher left on a 600,000-acre portion of land known as Gold Butte, managed by the BLM. Bundy said he attempted to make payments to the county, as he’d done in the past until the BLM unilaterally took over, but the county turned him down.

Bundy’s family has raised cows on the land since the 1870s. The BLM was established much later in 1946. Cozy with federal judges, beginning in 1998, the BLM began to get rubber-stamped court orders requiring Bundy to remove his animals.

This siege likely has very little to do with protecting the desert tortoise, but is something much more nefarious. Journalist Dana Loesch reports that Sen. Harry Reid (D-Nev.) purposely pushed the BLM to initiate the power grab, intent on controlling Nevada land as a payback to his top donor and special interests. It is no coincidence that the current director of the BLM, Neil Kornze, is a former senior advisor to Reid.

The federal government already owns 84 percent of the land in Nevada. The BLM frequently gives waivers for wind or solar power development in areas where the desert tortoise is found. The desert tortoise has the least serious designation of endangered species, “vulnerable.” It is not considered “critically endangered” or even “endangered.” In fact, in 2013, the BLM announced it was going to euthanize hundreds of tortoises due to budget restrictions.

This is not the first time ranchers have had conflict with the federal government’s increasingly expansive control over government lands. The Sagebrush Rebellion during the 1970s and 1980s frequently pitted cattle ranchers against the BLM and environmental activists. No doubt many of these current land grabs are being done in order to force people out of rural areas and into the cities, as part of Agenda 21’s vague goals of making the earth more “sustainable.”

In 2012, investigative reporter Marcus Stern blew open a deal Reid and his son had arranged with a Chinese company to build a $5 billion solar farm and panel manufacturing plant in the southern Nevada desert. The BLM helpfully expressed its opinion that trespassing cattle would need to be removed in order to make way for the deal. Although the project ultimately failed, it represents part of a pattern by Reid to seize land to give to special interests in order to benefit himself, his family and campaign contributors. Similarly, in 2010, Reid’s campaign received thousands of dollars in donations from a Texas wind farm’s backers, which Reid rewarded with $450 million in federal stimulus funds.

The BLM admits that Bundy is not the only rancher who is violating federal grazing regulations, just one of the more serious cases. Clearly, Bundy was singled out and targeted. Senior BLM rangeland management specialist Bob Bolton said that the BLM only performs about four livestock impoundments a year, involving only a few dozen animals at most. He observed, “What we're doing this week in Nevada is not the norm at all.”

Although federal agents finally backed off and returned the cows, the BLM says Bundy still owes over $1 million in grazing fees and penalties, and will try to collect it administratively. Why wasn’t this approach taken initially, instead of wasting $3 million of taxpayers’ money on the failed heavily-armed seizure? Bundy thinks it is because he’s not a Reid donor.