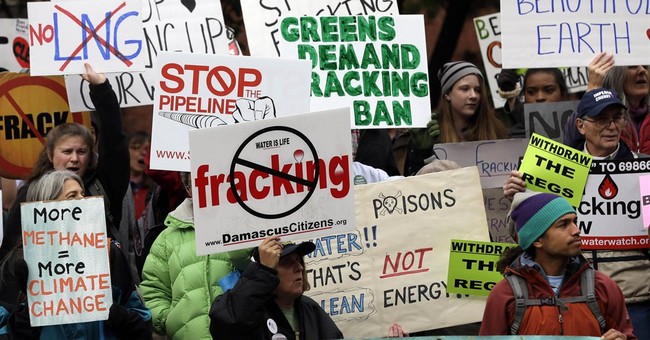 The environmentalist movement’s latest target is fracking. Fracking, or hydraulic fracturing, is the process of extracting shale gas from deposits underground. Natural gas releases less CO2 than oil into the environment. For this reasons, environmentalists concerned with global warming should be pleased to be moving away from oil and toward natural gas, but instead they are trying to stop it, state by state as well as on the federal level.

This is because their real goal is not about reducing carbon emissions, but the radical change of getting people out of their cars and into public transportation. Not satisfied with incremental moves, environmentalists want to rush the process of moving people out of the suburbs and into tiny apartments located in big cities in order to satisfy their unproven, junk-science speculation that using natural sources of energy like oil and gas is bad for the earth.

Fracking started becoming prevalent in the U.S. about five years ago. The U.S. has plenty of natural gas reserves; the International Energy Agency (IEA) estimates supplies will last for 230 years.

Environmentalists claim that fracking pollutes the drinking water supply and releases methane into the atmosphere, since it utilizes the high-pressure blasting of sand, chemicals and millions of gallons of water into the ground. They claim fracking is dwindling the water supply, and may be increasing earthquakes. The Oklahoma Geological Survey found that earthquakes in Oklahoma increased from 22 in 2009 to 222 in 2013, and are on track this year to reach over 780.

However, water can be conserved by reusing it; mixing it with quantities of carbon dioxide and nitrogen, or can be replaced completely with liquified petroleum gas in gel form. The amount of water used by the fracking industry is tiny compared to the amount used by other users, particularly agriculture. In Colorado, fracking uses just .08 percent of the water used statewide, whereas agriculture uses 85 percent.

Most concerns about fracking appear to based on speculation and junk science. Simply because earthquakes and pollution are occurring near fracking does not prove a correlation. Studies that are being done on the correlation are lamentably funded by special interest groups or are emanating from parts of the government that have an agenda, such as an ongoing study started by the Department of Environmental Regulation.

Fracking has been a boon for states’ economies, creating jobs and drastically increasing tax revenues. North Dakota has benefited in particular. Fracking is probably the biggest factor lifting the country out of its deepest economic slump since the Great Depression. A recent study from USC found that drilling one of California’s largest shale deposits will bring in $25 billion in taxes and create 2.8 million jobs by 2020. It reduces our dependency on foreign oil. Venezuelan imports of crude oil are down to their lowest levels since 1985. The U.S. and Canada currently lead the rest of the world in fracking.

A few states like New York have caved into pressure from environmental activists and banned fracking. New York Governor Andrew Cuomo put a hold on fracking in 2008 when the state Department of Environmental Conservation began a review of the practice. Vermont has completely banned it, and other states have introduced legislation that would prohibit it. The federal Department of the Interior’s Bureau of Land Management is putting into place onerous rules restricting fracking on federal land.

Each state has unique needs and resources and should be permitted to regulate its own fracking operations. The federal government shouldn’t be permitted to overrule the states using the deceitful and tired old argument that the Constitution’s Commerce Clause authorizes its infringement upon the Tenth Amendment. Fracking is about energy, not commerce between the states. When the federal government attempts to regulate things, they inevitably become less efficient and more burdened by taxes and regulations.

Fracking is inevitably going to become more controversial in the future. It will be decided soon whether or not to export much of the natural gas obtained from fracking. The Department of Energy projects that the U.S. will export more natural gas than it imports by 2018. Extracting natural gas for our own use is one thing, but selling it to other nations presents an entirely new issue. If we sell off our own energy, then we’re back to being subject to the prices and conditions of foreign oil set by totalitarian countries like Venezuela, unless we start drilling for more oil within the U.S., which has proven to be an even tougher sell to politicians.

The environmentalists don’t care, they want to stop the U.S. from using any oil or natural gas, so the ends justify the means, no matter how much we all have to suffer economically. They don’t care about working with others to forge a solution, it’s their way or the highway, science notwithstanding. Hopefully our political leadership will stand up to them and their sky-is-falling, goofy predictions.