Radical Environmentalists Have Blood of 19 Arizona Firefighters on Their Hands 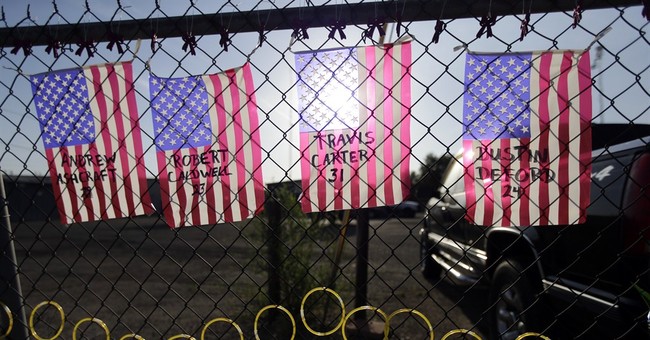 Nineteen firefighters died fighting a forest fire in Arizona earlier this summer. Curiously, almost no one is talking about why it happened, only that it was a tragedy. Arizona Deputy State Forestry Director Jerry Payne has been the only one to speak out about the cause, and he backtracked immediately afterwards, apologizing for what he said. He claimed that the superintendent of the Granite Mountain Hotshots violated wildlife safety protocols while fighting the Yarnell Hill Fire on June 30th, 2013, 60 miles north of Phoenix.

According to Payne, the superintendent’s violations allegedly included not knowing the location of the fire, failing to have a spotter serve as a lookout, and leading his crew through thick, unburned vegetation near a wildfire. There wasn’t a proper escape route in case the fire changed direction; the firemen would have to bushwhack through thick brush to retreat. The firefighters lost their lives when the fire suddenly changed direction and came at them, traveling 12 miles an hour. The fire destroyed more than 100 of the roughly 700 homes in Yarnell, burning 13 square miles. Flames shot up to 20 feet in the air.

The account given by Payne is not the whole picture. Firefighting today is not what it was 20 years ago. Fires 20 years ago moved slowly, at 2-3 mph. Today they move at speeds of 10-12 mph. There are three reasons for this. First, people are building more homes near or within forests. In the past, no one dared to build a house in the forest, because there weren’t fire departments everywhere. As one retired firefighter told me, “Try to find a photo of a house in the middle of the forest from 100 years ago. You can’t.”

Secondly, environmentalists started insisting that every forest fire be put out to save trees. Natural forest fires, which are necessary to preserve the balance of nature, are no longer allowed to burn. The overabundance of trees has created an easy path for forest fires. Firefighters who used to easily outrun forest fires can no longer do so. An op-ed in the Los Angeles Times explained the phenomenon last year, “Decades of heroic victories against fire led to gradual defeat in the larger war. Fuel builds up, and when it ignites, the fires burn hotter, faster and more destructively.”

The third reason there are faster wildfires is due to environmentalists’ efforts to shut down logging in the name of protecting the latest fashionable endangered species. Environmental groups like the Sierra Club have filed federal lawsuits against the U.S. Forest Service to stop it from thinning forests, and injunctions have been granted paralyzing the agency while years of litigation drag on. These include lawsuits against President George W. Bush’s 2003 Healthy Forests Initiative, which allowed more thinning of forests to prevent fires. Radical environmental groups are opposed to the removal of trees from old-growth forests. But dead trees need to be removed or burned in controlled fires, otherwise they present a highly flammable risk from lightning or arson. Ironically, mega-wildfires are burning down forests where logging has been prohibited – a waste of thousands of acres of trees.

These three factors have caused vegetation to become so dense across the country that it is too risky to attempt prescribed fires anymore. Many of the species the radical environmentalists claim need protection, such as the Spotted Owl, will not be saved by keeping more forest land standing. The Spotted Owl was already headed for extinction in the Northwest before the draconian policies were put into place. In 1990, green activists got regulations passed requiring timber companies to leave at least 40 percent of the old-growth forests intact within a 1.3 mile radius of any Spotted Owl nest or activity site. The Clinton administration used The Endangered Species Act to keep old-growth forests untouched. In 2008, liberal federal district judge Susan Bolton upheld a U.S. Forest and Wildlife decision to declare 8,600,000 acres (35,000 km2) in Arizona, Utah, Colorado and New Mexico as critical habitat for the owl. Yet no one has any idea how many Spotted Owls are in the Southwest now. Bill Block, manager of the Forest Service's wildlife and terrestrial ecosystems program in Flagstaff, Ariz., told the New York Times a couple of years ago, "We don't know if we've got 5,000 owls or 10,000 owls, because there's never been a concerted effort to figure that out," he said. Ironically, the biggest threat to the Spotted Owl has become the mega-wildfires.

Part of the solution is to have people who choose to live near public forests help manage the risk. Libertarian writer John Stossel suggests that people who choose to live in risky areas, such as on oceanfront property, should be required to assume the risk, instead of leaving it to the government to bail them out. Developers should also be required to assume part of this risk, as a disincentive to build homes in risky areas.

Congress needs to start a full investigation into the radical environmental policies that led to this tragedy. Eighty-three firefighters died last year. This year will surpass that number, as 70 fatalities have been reported already. How many more firefighters must die before someone stops the radical environmentalists? They will only agree to cutting down small-diameter trees and the thinning of forests near communities. There are several laws that must be changed, including the National Environmental Policy Act. It has been used to prohibit logging and controlled forest fires. The Forest Service 2001 Roadless Area Conservation Rule (Roadless Rule), implemented during the last days of the Clinton administration, should be repealed. It prohibits roads on millions of acres of National Forests, making them off limits to logging or other use. Today, 58.5 million acres, or about 30 percent, of National Forests are roadless.

There will always be wildfires caused by lightning and arsonists, as well as species that become extinct due to natural causes. To pretend otherwise reeks of an agenda – an agenda to move Americans into urban areas and to reduce man’s technological control over nature. These socialist goals will leave more and more rural Americans and firefighters in danger, since no American can outrun an out of control forest fire.